Dorsey’s “Twitter Support” account tweeted last week: “Verification was meant to authenticate identity & voice but it is interpreted as an endorsement or an indicator of importance. We recognize that we have created this confusion and need to resolve it. We have paused all general verifications while we work and will report back soon.”

Verification was meant to authenticate identity & voice but it is interpreted as an endorsement or an indicator of importance. We recognize that we have created this confusion and need to resolve it. We have paused all general verifications while we work and will report back soon

Dorsey confirmed from his personal account they’re working to “fix” the problem (which they made up).

We should’ve communicated faster on this (yesterday): our agents have been following our verification policy correctly, but we realized some time ago the system is broken and needs to be reconsidered. And we failed by not doing anything about it. Working now to fix faster. https://t.co/wVbfYJntHj

Twitter said they’re going to pull verification check marks from anyone they deem to be “promoting hate,” whether on or off their platform.

Twitter now says verified users can have status revoked based on the content of their tweets, including “promoting hate" pic.twitter.com/XbhZp9dhnD

Twitter just emailed me to tell me they are removing my "verified badge" because they claim my account "doesn't comply with Twitter's guidelines for verified accounts."

Twitter has changed their verification policy just to be able to censor me. Several other accounts were unverified including Richard Spencer and James Allsup while Baked Alaska was permanently suspended altogether. pic.twitter.com/PO1QnJC2C6

For some reason, all these leftists promoting hatred against white people have not been deverified:

Fuck it. Kill all white people. Kill em all. If it means no more Paul Ryan I'm willing to go. I'm ready. ITS WORTH IT.

A year ago today, a racist apricot-hued asshole scammed his way to the White House thanks to a self-righteous FBI director, a superficial media, a foreign nation adept at catfishing on a budget, and mostly, fragile white people in need of an ego boost. Fuck all of them forever.

Hey @twitter @jack – why are these racists verified? pic.twitter.com/K0EyZ14a2L

this film, and The Big Chill, are the reason I hate white people.

yes I am racist! I hate white people!

this why I hate white people

I tried but I hate white people too much. #whitegenocide

I hate this article and I hate white people pic.twitter.com/mwQf0DHgQ1

In fairness, after reading this headline, I hate white people https://t.co/94i27PC5xF

Fuck white people and their fucking guns and their bullshit gun culture and all of it. Goddammit.

Keith Olbermann, who does nothing but “promote hate,” is also still verified.

Twitter suspends influential conservative Trump supporter @bakedalaska for no apparent reason yet @KeithOlbermann still has an account and is in clear violation of Twitter TOS. pic.twitter.com/PK7NE32G1s

CUNY Professor Jessie Daniels, who said anyone “reproducing white children” is “part of the problem” of “white supremacy” is still verified. 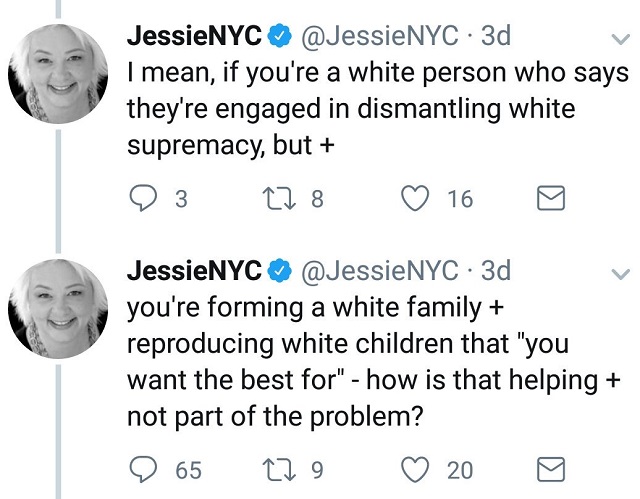 Drexel professor George Ciccariello-Maher, who said he wants “white genocide for Christmas” and said the genocide of white people during the Haitian revolution “was a good thing indeed” is also still verified. A Twitter user conducted an interesting experiment to sniff out double standards in the site’s censorship policy concerning race.

The person wrote the same comment on two different accounts with only two words changed, then reported each for abusive behavior.

The first comment read: “I fucking hate white people and their inconsiderate asses for voting for Trump. Fuck you.”

The second: “I fucking hate black people and their inconsiderate asses for voting for Clinton. Fuck you.”

The first was found not to be in “violation of Twitter’s Rules regarding abusive behavior,” while the second resulted in the user’s account being banned.