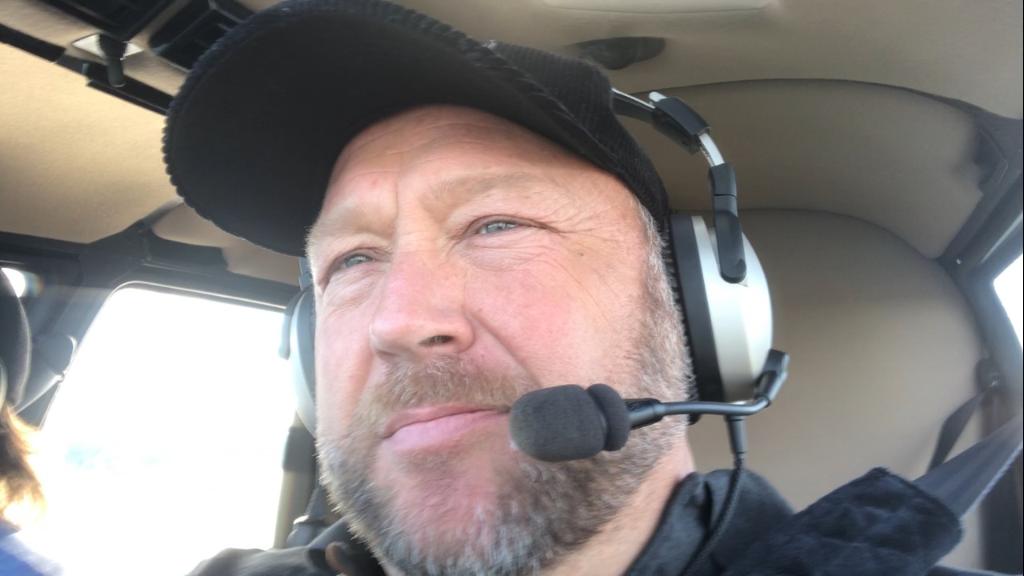 Since the beginning of time there have been constant attempts to enslave and subdue the spirit of humanity. From Barbarian hordes streaming down the mountain to the Stasi secret police torturing those who dreamed to be free.

In this age of rapidly accelerating technology the threat to our liberties is a very real and present danger. Alex Jones is a unique voice that sifts through the information and exposes the underlying intentions. 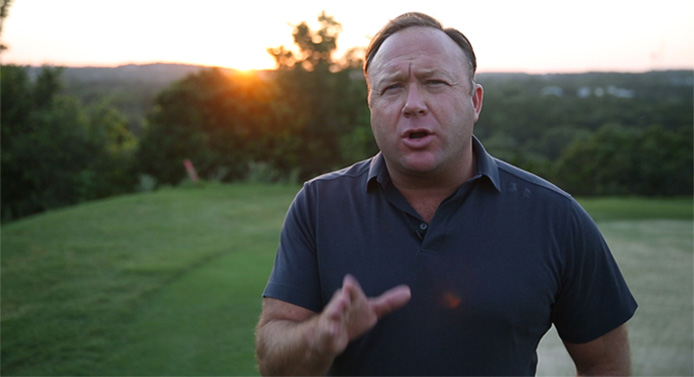 In the past, nations and empires have met on the battlefield to pit men and metal against their ideas. Now the true battlefield has become the sphere of information.

The manipulation of facts and the slow relentless war on reality is being waged on this landscape of the mind. When those who seek to control humanity can convince the world that what they say is true, we will rapidly descend into the most oppressive tyranny ever seen.

Alex Jones has built infowars from the ground up putting profits back into the company to continue to grow Exponentially. Alex has never taken a loan and is not beholden to advertisers, investors or any other group that could censor or influence his position. The listeners and viewers are Alex’s partners and he has vowed to honor their trust and always remain truly independent. 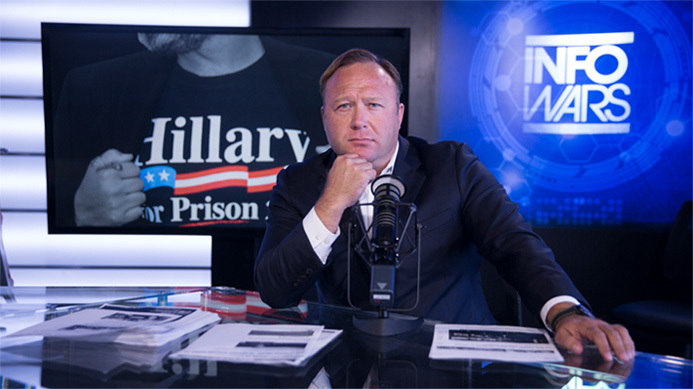 Alex Jones and Infowars stand against this onslaught. Every day connecting the dots, peeling back the onion. He digs deeper into the story with the insight of experts, whistleblowers and insiders. Seeking the truth and exposing the scientifically engineered lies of the globalists and their ultimate goal of enslaving humanity. 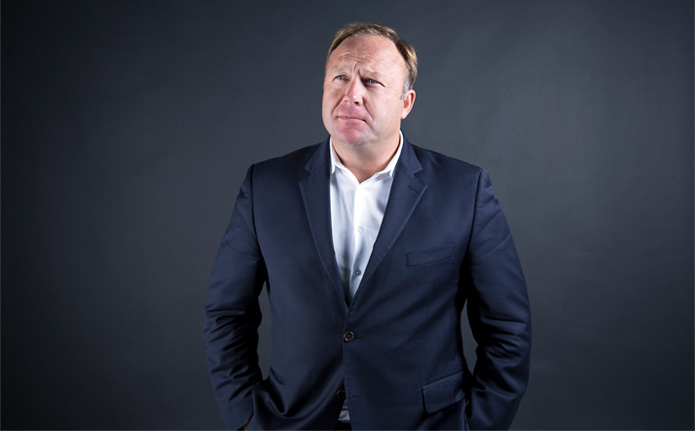 Alex Jones is internationally recognized by many as a trailblazer of new media and an icon of the burgeoning liberty movement.

Starting at the tender age of 20, Jones launched an access television show which within a year led to him scoring a highly rated week night radio show in Austin, Texas.

The Alex Jones Show is now syndicated on over 160 stations across the country and routinely breaks huge stories in addition to featuring some of the most insightful and news making guests from across the world.

Jones is dedicated to libertarian and constitutionalist ideas, in addition to what he has coined "1776 worldwide" - promoting a true culture of liberty, transparency and freedom on a planetary scale to empower humanity, while vehemently opposing Agenda 21 and the globalist threat to national sovereignty. 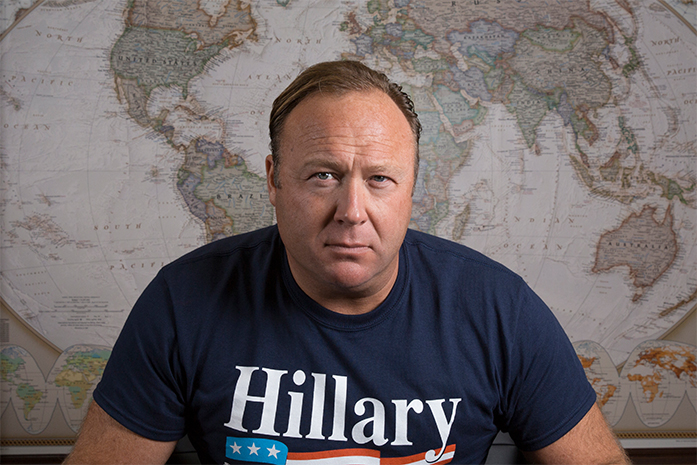 Jones believes that informing people about the true nature of power, we can foster a real debate about humanity's destiny and allow the species to evolve towards a more orderly singularity that has humans at the core of a system which is based around maintaining free will and integrity - defying the transhumanist goal of Social Darwinism and scientific dictatorship.

Amidst the mammoth ideological clash between techno-authoritarianism and free human movements across the globe, Jones is a bullhorn for true libertarian principles and the empowerment of humankind in the eternal battle against tyranny.

Jones has hit the headlines on numerous occasions for his outspoken advocacy for freedom, notably in January 2013 when he took part in a televised debate with CNN's Piers Morgan on gun control which garnered global attention.

A 2011 Rolling Stone article described Jones as "a giant in America's conspiracy subculture," with a subsequent in-depth profile adding that he made Glenn Beck and Rush Limbaugh, "sound like tea-sipping NPR hosts on Zoloft."

According to UT Professor Randolph Lewis, Jones is "one of the most important political media figures in the country" and "his circle of Texas libertarians is maybe the most important zone of resistance to surveillance culture right now."

"Alex Jones is a model for people to create their own media," Michael Harrison, editor of the industry trade magazine Talkers, told Rolling Stone writer Alexander Zaitchik. "When the history is written of talk broadcasting's transition from the corporate model of the 20th century to the digital, independent model of the 21st century, he will be considered an early trailblazer." By establishing a team of news reporters who provide cutting edge analysis and on the ground high tech breaking coverage, Infowars.com continually dominates the news coverage while wearing our bias - the truth - openly and proudly on our sleeve.

In the spirit of Thomas Jefferson and George Washington, Jones passionately argues against foreign entanglements and wars for the sake of corporate and banking interests. Jones avoids the bogus political labels of "left and right" and instead focuses on what really matters — what's right and wrong. As a tenacious journalist, Jones has broken hundreds of national stories over the span of his career, a feat that led to Matt Drudge giving Infowars.com a much coveted spot on the permanent links section of his hugely influential and highly trafficked website, DrudgeReport.com.

Jones' infiltration of the ultra-secretive Bohemian Grove compound in 2000 also caused shockwaves, with the occult cremation of care ritual being caught on camera for the first time.

Alex's mainstay is his nationally syndicated news-talk show produced from his studio in Austin and broadcast on the Genesis Communication Network, based in Minnesota. The Alex Jones Show airs on over 160 AM, FM, and shortwave stations across the United States Monday through Friday from 11:00 a.m.—2:00 p.m. Central Standard Time. As well, Alex's show is the largest draw for the talk genre on Shoutcast and the Internet.

"If you've never heard of Alex Jones, then you've been missing out on some of the most dynamic, hard-hitting radio on the planet," explains ZDNet. "This guy is a national treasure, a light breaking through the electronic Berlin Wall of the US media establishment," adds BBC investigative journalist Greg Palast.

Alex Jones is a prolific filmmaker, producing on average two films per year since his first documentary, America: Destroyed By Design, was released in 1997. Alex's films primarily document the emergence of the New World Order, world totalitarian government, the steady erosion of the Constitution and national sovereignty in the United States, government corruption, corporate fascism, eugenics, martial law and the encroaching police state.

"Find out how the sovereignty of the United States is being subordinated to the globalist interests, through such examples as the Foundations at the Presidio and the Panama Canal. See United Nations and Chinese Interests are affecting our nation. Witness the United Nation's indoctrination of America's children and watch exclusive interviews with witnesses of the Oklahoma City Bombing."

Documents how the U.S. Government grossly overstepped Constitutional boundaries, as well as the cover up that followed with the Branch Davidians in Waco, Texas.

There are over 85,000 Federal and regional governmental institutions: school districts, water and power authorities, country and city governments — and they own over 70 percent of the stock market. The video includes an interview with Joe Banister, former IRS Special Agent, exposing how the IRS is a collection agency for the private, run-for-profit Federal Reserve.

Jones' "Dark Secrets: Inside the Bohemian Grove" documented the first ever hidden camera incursion into the Grove and the bizarre pagan ritual, the Cremation of Care, practiced by its members, all men, including both Presidents Bush, Bill Clinton, Jimmy Carter, Colin Powell, and Henry Kissinger to name but a few.

Exposes the growing militarization of American law enforcement and the growing relationship between the military and the police.

From children in public schools being trained to turn in their peers and parents to the National Guard and Army patrolling our country's highways, The Takeover reveals the most threatening developments of police state control in our age.

Details the birth of a global police state, the history of government sponsored terrorism, the modern implementation of fear-based control, and the future plans of the New World Order.

In two hours, Alex Jones reveals the Globalists' master plan for world domination. In this powerful expose, Jones explains why the elite are using manufactured terrorism to drive the populations into accepting tyranny.

American Dictators is a 90+ minute expose chronicling the degeneration of America's political process. Alex Jones rips away layer after layer of the false left-right paradigm and finally reveals the 2004 election.

From the frontlines of the Police State to the darkest sanctum of the secret society that controls it, Martial Law reveals the master plan of a group hell-bent on capturing America today — and tomorrow the world.

Exposes the connections between the Bohemian Club and Skull and Bones and other occult secret societies. Jones explores the roots of the Grove and its links to occult networks dating back to ancient Egypt and Babylon.

TerrorStorm: A History of Government-Sponsored Terrorism (2006)

Throughout history, criminal elements inside governments have carried out terror attacks against their own populations as a pretext to enslave them. TERRORSTORM reveals how, in the last hundred years, Western leaders have repeatedly murdered their own citizens while posing as their saviors.

Jones chronicles the history of the global elite's bloody rise to power and reveals how they have funded dictators and financed the bloodiest wars—creating order out of chaos to pave the way for the first true world empire.

Including interviews with Jesse Ventura, Rosie O'Donnell, George Carlin, Willie Nelson and Martin Sheen, this film is unlike anything you have ever seen. The only question after viewing it is: will you become part of the Truth Rising?

In addition to producing the above films, Alex had a cameo role in Richard Linklater's Waking Life, a part that received a standing ovation at the Sundance Film Festival. He also appeared as the "street prophet" in Linklater's 2006 film, A Scanner Darkly, based on the novel of the same name by Philip K. Dick.