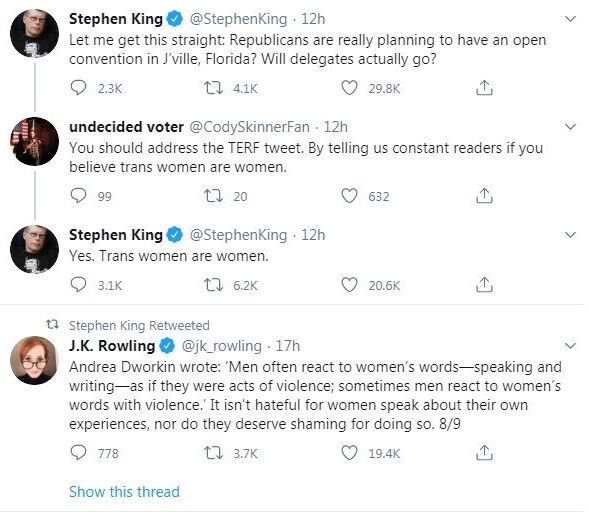 Her statements, however, were interpreted as “transphobic” by many transgender activists and criticised by public speakers, including the Harry Potter star himself, Daniel Radcliffe.

The Shining author Stephen King has weighed in on the controversy surrounding British writer JK Rowling by saying in a Twitter reply that “trans women are women”.

Rowling landed in hot water in June after commenting on a Devex article titled “Creating a more equal post-COVID-19 word for people who menstruate”. The writer mockingly asked whether it was “women” that the article was actually referring to. However, she soon received severe condemnation for her remark, with many accusing her of “transphobia” in relation to transgender men, who also menstruate.

‘People who menstruate.’ I’m sure there used to be a word for those people. Someone help me out. Wumben? Wimpund? Woomud?

​The Harry Potter author has continued to defend her position, however, speaking up for the importance of sex as a category that has defined the troubling experiences of many women, including her own.

“I respect every trans person’s right to live any way that feels authentic and comfortable to them. I’d march with you if you were discriminated against on the basis of being trans. At the same time, my life has been shaped by being female. I do not believe it’s hateful to say so”, she wrote on 6 June.

She later added that the issue of women’s rights was important to her due to her own background as “a domestic abuse and sexual assault survivor”.

“I’m mentioning these things now not in an attempt to garner sympathy, but out of solidarity with the huge numbers of women who have histories like mine, who’ve been slurred as bigots for having concerns around single-sex spaces”, the writer argued.

She also soon rushed to clarify her position in a short essay titled “J.K. Rowling Writes about Her Reasons for Speaking out on Sex and Gender Issues”.

The writer has continued to be criticised by many public figures, including the Harry Potter films’ key actor Daniel Radcliffe, who apologised to the saga’s fans who were offended by Rowling’s comments and laconically noted that “transgender women are women”.

“I’ve always revered Stephen King, but today my love reached – maybe not Annie Wilkes levels – but new heights”, she tweeted, according to the screens of her post. “It’s so much easier for men to ignore women’s concerns, or to belittle them, but I won’t ever forget the men who stood up when they didn’t need to. Thank you, Stephen”.

However, when The Green Mile author was asked to clarify his position in relation to the “TERF tweet”, referring to “trans-exclusionary radical feminism”, by one of his followers, King argued that he believes trans women are women.

Rowling’s tweet praising the author has now been deleted from her feed.