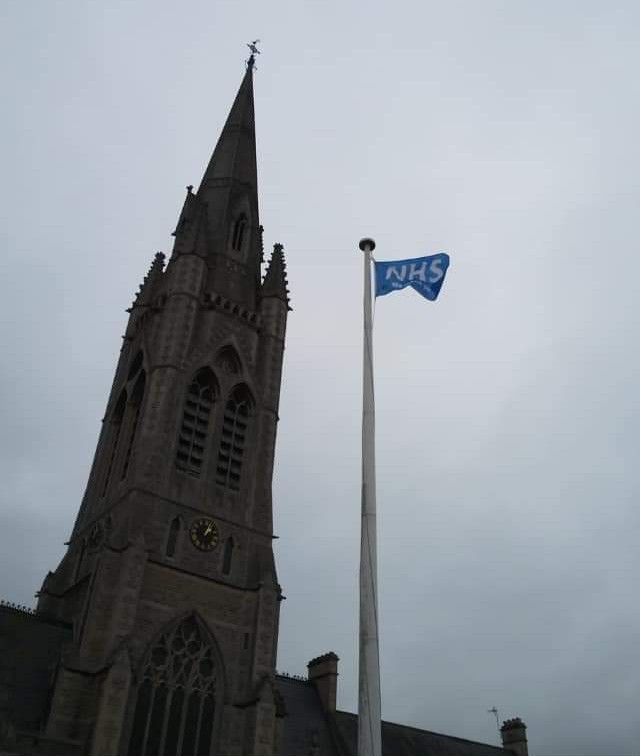 A Catholic Church in England has removed its Vatican flag and replaced it with an NHS flag, illustrating once again how the National Health Service is akin to a religious institution in the United Kingdom.

“My uni parish has taken down the Vatican flag and replaced it with…the NHS flag,” remarked the Twitter user who posted the image.

The NHS flag is being flown by St John The Evangelist’s Church, which is located in in the south-east section of Bath City Centre, one of Britain’s most historic and iconic towns.

The worship of health workers amidst the coronavirus pandemic is stronger in the UK than any other country in the world.

Every Thursday at 8pm, people are encouraged to clap for health workers outside their front doors and balconies.

This has led to some people being publicly shamed on social media for failing to take part in the weekly observance.

Several of these have appeared around my village. Someone even left flowers at the foot of this one.

Over the weekend, there were houses flying NHS flags, and many more have posters in the windows.

It's pretty scary for someone who clings to Reason.

A respondent to the tweet also highlighted how NHS worship has extended to yard signs, flags and posters in windows.

Anecdotal evidence also suggests that nurses are sometimes being applauded when they are seen in public, including when doing their grocery shopping.

Meanwhile, acute hospital beds in the UK are four times emptier than normal and thousands of cancer, heart attack and stroke victims are dying because they can’t get treatment.

There’s plenty of time and resources to create Tik Tok dancing videos though.