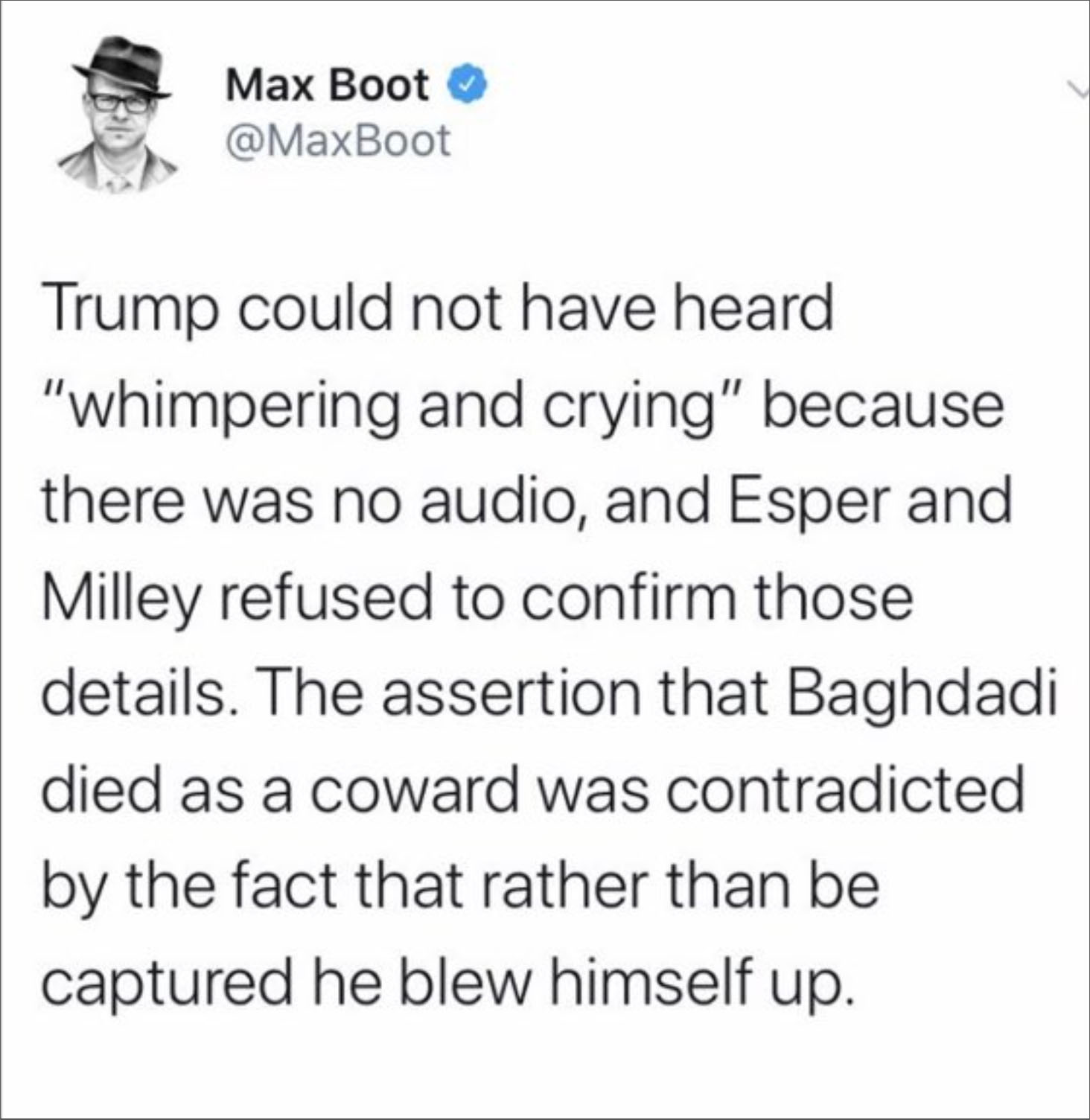 Washington Post contributor and CNN analyst Max Boot defended ISIS leader Abu Bakr al-Baghdadi in an op-ed on Monday, claiming that his blowing himself up along with his children was not a cowardly act, as President Trump has stated.

In his op-ed titled, “Baghdadi’s death could have been Trump’s finest hour. He messed it up anyway,” Boot claims that Baghdadi “blowing himself up” contradicted President Trump’s assertion that he died a coward.

“Trump could not have heard ‘whimpering and crying’ because there was no audio, and [Defense Secretary] Esper and [Chairman of the Joint Chiefs of Staff U.S. Army General] Milley refused to confirm those details,” Boot wrote. “The assertion that Baghdadi died a coward was also contradicted by the fact that rather than be captured he blew himself up.”

Boot repeated that shameful talking point on Twitter as well, which he deleted after fierce online backlash.

Seeing the left defend a rapist & mass murdering terrorist has been fun to watch #TrumpEffect😂 pic.twitter.com/5NQfXKb7UY

#1. Committing suicide instead of facing justice is the definition of cowardice

#2. He also blew up three 3 kids in the process pic.twitter.com/4DyQu3a7UE

Defending the honor- and that is what this is- of the guy who started ISIS merely to come up with an anti Trump angle to a column is next level anti-Trump delusion. How many more levels are there.

The liberal media is currently engaged in an active campaign to defend the honor of al-Baghdadi… let that sink in.

The internet is forever. I hope the @FBI will be showing up at your door soon. There is no place in America for pro-ISIS rhetoric. pic.twitter.com/dm0yHbG5bl

Following widespread criticism, Boot edited that bit defending Baghdadi’s honor in his article and stated that he didn’t mean what he wrote.

“An earlier version included a sentence questioning whether Trump was right to call Baghdadi a coward,” Boot tweeted. “That was removed b/c it wrongly conveyed the impression that I considered Baghdadi courageous. As I wrote Sun: Baghdadi was ‘a sick and depraved man.'”

An earlier version included a sentence questioning whether Trump was right to call Baghdadi a coward. That was removed b/c it wrongly conveyed the impression that I considered Baghdadi courageous. As I wrote Sun: Baghdadi was “a sick and depraved man.” https://t.co/R77v7ef0GR

As we reported, the mainstream media quickly sided with Baghdadi in their mission to bash Trump, criticizing the way he described the attack, the harsh rhetoric condemning the bloodthirsty jihadist terrorist group, and even his comments about Baghdadi “dying like a dog.”

Instead of celebrating the fact President Trump helped kill ISIS boss Baghdadi, the media instead slammed Trump and defended the murderous terrorist leader.