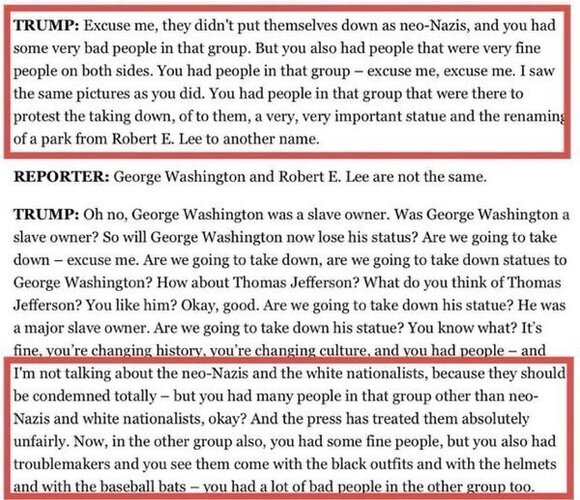 Spencer was asked on Twitter if he was going to vote for Biden given his “belief that Biden/Kamala will be tougher on crime/BLM than Trump.”

“I plan to vote for Biden and a straight democratic ticket. It’s not based on “accelerationism” or anything like that; the liberals are clearly more competent people,” responded Spencer.

I plan to vote for Biden and a straight democratic ticket. It’s not based on “accelerationism” or anything like that; the liberals are clearly more competent people.

This prompted Spencer, who supported Trump in 2016 but has since been given a platform by the likes of CNN to criticize the president, to immediately begin trending on Twitter.

Spencer was also a leading figure at the August 2017 Unite the Right rally in Charlottesville which was attended by neo-nazis.

Both the media and Biden have amplified the fake story that Trump described neo-nazis attending Charlottesville as “very fine people,” when in fact Trump specifically disavowed neo-nazis in the same breath.

“Despite Trump’s crystalline clarity, the media instantly created their hoax, falsely proclaiming that Trump had called white supremacists “fine people,” writes Widburg. “Joe Biden has been running with this hoax ever since. Indeed, it’s the accusation at the core of Biden’s campaign, for he mentioned it when he announced his candidacy, when he accepted the nomination, and when he had a brief, tightly controlled interview with ABC.”

When Donald Trump was endorsed by David Duke in 2016, the media never let it go, repeatedly asking Trump to disavow the former KKK leader.

Trump’s entire campaign then became dogged with the narrative that he was the candidate of choice for racists, white supremacists and neo-nazis.

One wonders if the corporate press will show the same level of enthusiasm in asking Biden to distance himself from Spencer.

I am demanding that you immediately disavow the support and backing of noted neo-nazi and white supremacist Richard Spencer.

P.S. I don’t make up the rules. These are the standards set by liberals. https://t.co/aRMUDzOLbU

Anyone on the Left who claims white supremacists are for Trump with nothing more than an old photo or anecdote to prove it must now contend with the fact that the poster boy of white supremacy, Richard Spencer, has announced he’s voting Biden & straight Democratic ticket

Liberals wet themselves over Joe Rogan supporting Bernie. If they don’t demand Biden condemn Richard Spencer, they have absolutely no leg to stand on. https://t.co/pRqYeYkriw

When will Joe Biden disavow the Richard Spencer endorsement?

In the age of mass Silicon Valley censorship It is crucial that we stay in touch.

I need you to sign up for my free newsletter here.