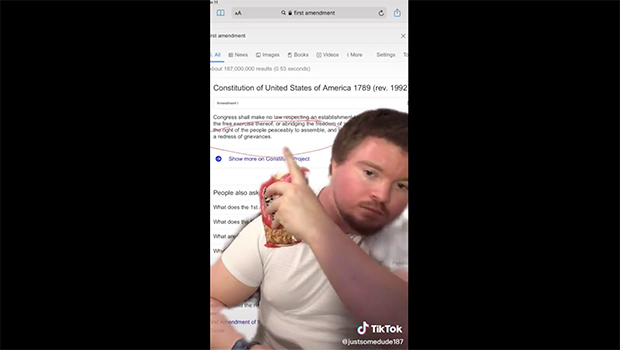 A man nonchalantly eating a bowl of uncooked ramen noodles with hot sauce has gone viral for debunking comments from CNN’s Chris Cuomo suggesting the riots are lawful.

In a viral TikTok video that’s since been shared across social media, a man is watching Cuomo explain the supposed constitutionality of rioting, before he pauses the segment and disproves the comments with a quick Google search.

“And please, show me where it says that protests are supposed to be polite and peaceful,” Cuomo asks his CNN audience.

Chris Cuomo get owned by a guy who eats uncooked top ramen. pic.twitter.com/Lr9hbALGDk

The man pauses the segment to show Cuomo the text of the First Amendment.

“It’s the First Amendment,” the man argued through a mouthful of raw ramen noodles, pointing at Google search results. “You just gotta look it up, Mr. Cuomo.”

The First Amendment of the US Constitution and Bill of Rights states:

Congress shall make no law respecting an establishment of religion, or prohibiting the free exercise thereof; or abridging the freedom of speech, or of the press; or the right of the people peaceably to assemble, and to petition the Government for a redress of grievances.

The video, created just three days ago, has since went viral and catapulted the man into meme stardom.

A Twitter account created by him under the handle @somedude187 has gained over 61.9K followers in just under a day.

The video speaks to the media’s treatment of the general public as uneducated morons, and demonstrates how common sense can easily debunk their gaslighting efforts.

In the Communist utopia of CHAZ, things are going entirely as expected!