At his MAGA rally in Florida Wednesday night, President Trump ran down the list of Democratic Presidential hopefuls, and mocked every one, stating “I’ll take any of them, just pick somebody, please.”

Trump described the Democratic primary race as a likely “choice between Sleepy Joe and Crazy Bernie.”

Trump also singled out Pete Buttigieg, drawing out the pronunciation of his name as “Boot-edge-edge” and proclaimed that the 37 year old mayor of South Bend, Ind., would be a laughing stock on the international stage.

“He’s got a great chance. He’ll be great. He’ll be great representing us against President Xi of China,” Trump noted, while the crowd roared with laughter.

“That’ll be great. I want to be in that room. I want to watch that one,” Trump concluded.

“And Beto. Beto, Beto. Boy, is he falling like a rock. What the hell happened to Beto?” Trump further boomed.

“I want to run so badly. I want this race to start immediately!” Trump declared as the crowd chanted “Four more years!”

“Let’s just pick somebody please and let’s start this thing,” he added.

The President also called on Democrats to stop the “nonsense” of investigations over claims of collusion with the Russian government.

“After two years, nothing — no collusion,” Trump said, adding “Now the Democrats are saying, ‘We want more.’ It’s time to stop this nonsense.”

“They want to do investigations instead of investments… I think it drives us onto victory in 2020.” Trump exclaimed.

Elsewhere during the rally, Trump slammed the media, pointing to reporters and bellowing “Those people back there, I call them the fakers, fake news media.”

“In six years, they’re all going to be out of business, folks,” Trump declared, adding “If we want to drive them crazy, I’ll say in 10 years.

“They’ll go crazy. ‘See, he is a despot. He is a despot.’” Trump added, mimicking the media’s probable response to the rally.

The focus of the media in the wake of the rally has been on Trump’s reaction to a supporter who suggested that immigrants should be shot at the border if they are attempting to enter the US illegally.

“That’s only in the Panhandle you can get away with that statement,” Trump responded.

The media is running with the headlines like ‘Trump laughs at idea of shooting migrants’. 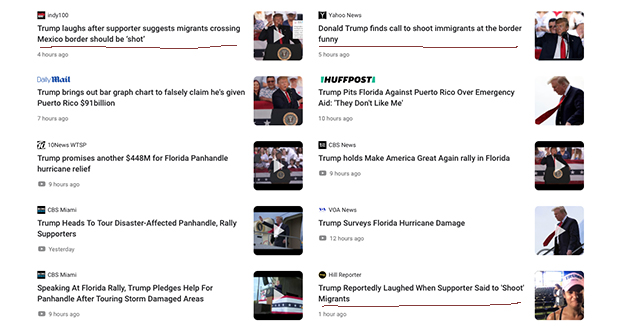 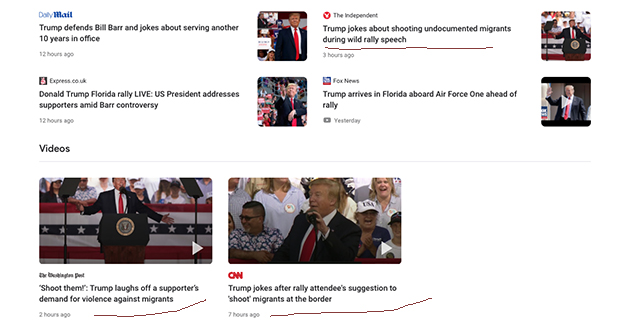 Watch the full rally below: