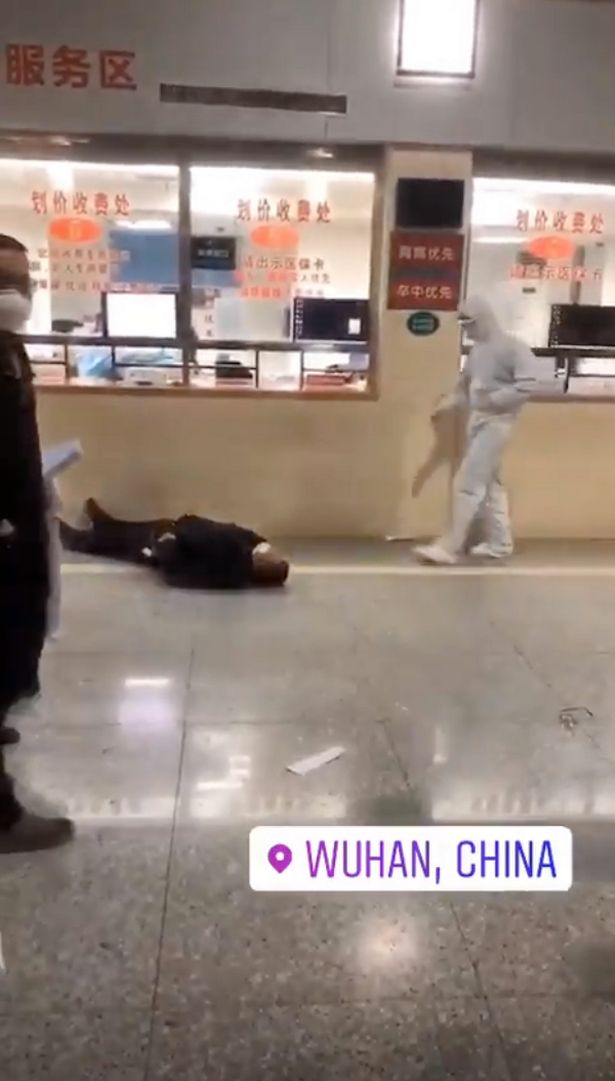 A video out of China purports to show a victim of the deadly new coronavirus after he collapsed on the streets of Wuhan.

The clip shows the man, who appears to be bleeding from his head following the fall, being attended to by ambulance workers in full medical bio-protection suits.

Another clip purports to show another victim of the virus who fell ill on the street being loaded into an ambulance.

Another image claims to show a coronavirus victim lying dead.

Three Chinese cities have been placed on complete lockdown in an attempt to stop the contagion, which has already killed 18 people.

In Wuhan, airports, train stations, ferries, subways and bus services have all been halted and the city’s 11 million residents have been ordered to wear masks.

The nearby cities of Ezhou and Huanggang and are also on lockdown.

Another slightly apocalyptic video filmed from a nearby apartment shows a vehicle spraying the deserted streets of Wuhan.

Today in Wuhan district in China 🇨🇳 everyone was restricted from moving out or inside of the city and everyone to stay indoors to prevent more further spread of the deadly #coronavirus #WuhanCoronavirus #CoronavirusOutbreak #China pic.twitter.com/LfcyGj2jCC

As we highlighted yesterday, experts are saying that the coronavirus has the same kill rate as the 1918 Spanish flu, which claimed 20-50 million lives.

Scientists say the virus could have spread to humans from snakes and bats, both of which are consumed as food products by some Chinese people.

Brian Wilson breaks down current information regarding the 2019 Novel Coronavirus which is infecting people worldwide.

Infowars reporter Rob Dew shows the patent number to the Coronavirus which is currently ravishing China.