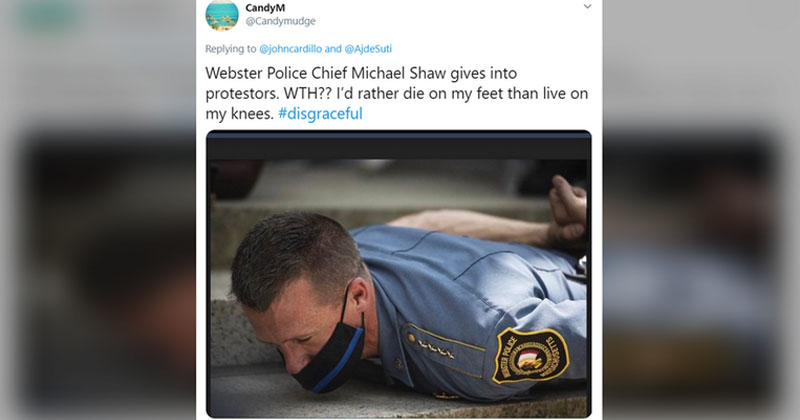 A video on social media shows the head of police in Webster, Massachusetts expressing his solidarity with Black Lives Matter activists by lying face down on the ground, prompting applause from protesters – and anger on Twitter.

In the footage circulating online, Michael Shaw is seen telling a group of demonstrators that he fully supports their right to peaceful assembly and that their message against police brutality and racism has been heard “loud and clear.” While other law enforcement officials have made similar statements, he went one step further by lying face down in front of a sign reading “I can’t breathe.” Many in the crowd joined him as they shouted, “Thank you, chief!”

In an incredibly powerful moment, Police Chief Michael Shaw, urged by chanting, joins the crowd laying face down on the pavement @telegramdotcom pic.twitter.com/nkuDPeODzo

Although some officers, soldiers and even FBI agents have been filmed ‘taking a knee’ in solidarity with the protesters, Shaw may be the first police chief to participate in a so-called ‘die-in’.

Shaw scored points with the demonstrators, but the scene sparked denunciations on social media. Twitter users described his actions as “disgraceful”, with some even calling for the police chief to be fired.

Webster Massachusetts police Chief. He should be fired. pic.twitter.com/pSNGHxogo8

The trend of “taking a knee” to show support for the anti-racist protests has divided Americans. Some have praised the gesture as a genuine show of compassion, while others have warned that it’s a sign of empty virtue-signaling and submission. The debate has even begun to polarize Europeans as BLM rallies spread to cities in the UK, Italy, France and Germany.

Alex Jones exposes those responsible for amping up the violence in the streets of America resulting in the deaths of black cops.