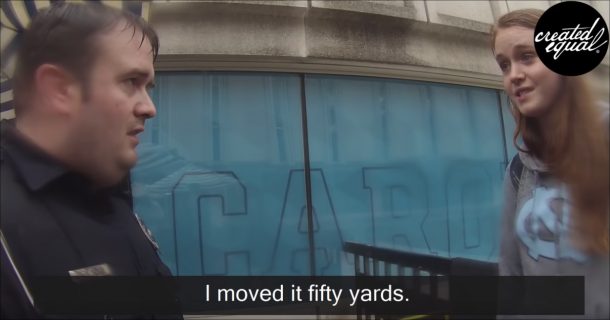 A woman on the University of North Carolina–Chapel Hill campus was caught on video stealing a sign from a pro-life protester who signaled a nearby police officer, resulting in the woman’s arrest.

The feminist took the sign from Austin Beigel of pro-life group Created Equal and ran off, but an officer quickly responded and stopped her from getting away.

“Why’d you rip it out of his hands?” asked the officer.

“Because,” the woman said, tapping on the sign, “this restricts women’s rights.”

Trying to leave, the woman complained, “I can’t believe y’all protect them,” but the officer held her up, saying, “Nope. You’re not going anywhere. Right now you’re being detained.”

“Detained for what?” pleaded the woman.

“Uh… larceny. You stole his sign,” the officer responded.

At this point, the woman’s facial expressions completely changed as she realized the officer wasn’t going to let her get away with bullying the protesters and taking someone’s property in broad daylight.

As she began tearing up, the woman claimed, “This is why women have such a problem getting abortions in North Carolina and y’all just let them get away with this s***.”

“Put your arms and hands behind your back. You’re under arrest for larceny,” the officer ordered.

The shocked woman then claimed she was “going to give it back to him” and asked, “Is there something else I can do?”

Explaining that he cannot “un-arrest” her, the officer then cuffed the woman and escorted her off campus.