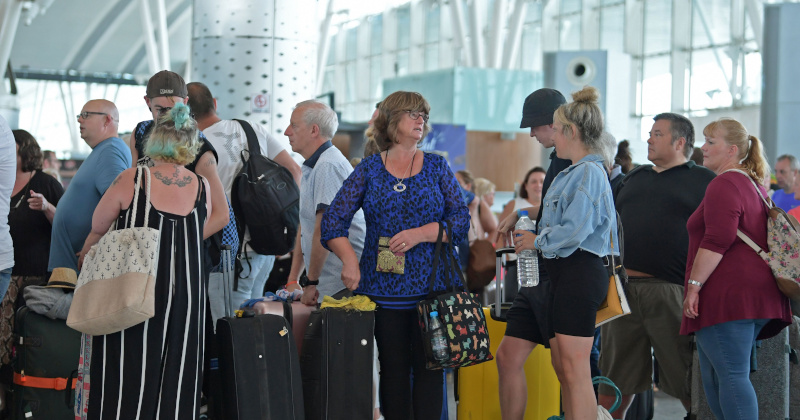 The UK government has stated it has plans “in place” to rescue stranded holidaymakers, while Germany will allow insurance companies to take charge.

In a statement, Thomas Cook said it was unable to reach an agreement between its stakeholders and proposed money providers, adding that “it had no choice but to take steps to enter into compulsory liquidation with immediate effect.”

The travel agency said that due to the scale of the situation, “some disruption is inevitable” but that the Civil Aviation Authority “will endeavor to get people home as close as possible to their planned dates.”

Thomas Cook UK confirmed the cancellation of all flights from British airports on September 23 and September 24 while in Germany Thomas Cook flights “are not guaranteed” on these dates.

The company’s chief executive apologized, adding that all attempts were made to avoid liquidation. The operator had been looking for €226 million ($250 million) from investors to save it from insolvency.

Peter Fankhauser said: “We have worked exhaustively in the past few days to resolve the outstanding issues on an agreement to secure Thomas Cook’s future. Although a deal had been largely agreed, an additional facility requested in the last few days of negotiations presented a challenge that ultimately proved insurmountable.”

He added: “It is a matter of profound regret to me and the rest of the board that we were not successful. I would like to apologize to our millions of customers, and thousands of employees, suppliers and partners.”

Its four airlines will be grounded and more than 20,000 staff worldwide are expected to lose their jobs. All Thomas Cook’s retail shops have also closed.

The UK government and the aviation regulator had drawn up a plan to use other airlines to bring Britons home, triggering the country’s biggest repatriation effort since World War II.

British repatriation will take place between September 23 and October 6, 2019.

In Germany, one of Thomas Cook’s biggest markets, insurance companies will help repatriate customers, according to an official.

German charter airline Condor, which comes under the insolvent travel operator’s umbrella, has applied for a €200 million ($219 million) bridging loan from the government. The carrier also said that, for now, flights will remain operational.

The German government is in the process of assessing whether to grant Condor’s “request for support.”

The British Prime Minister said that the government should not bail out Thomas Cook, arguing that doing so would create “a moral hazard” because other firms might expect similar treatment in the future.

“We need to look at ways in which tour operators one way or another can protect themselves from such bankruptcies in future,” Johnson said. “One is driven to reflect on whether the directors of these companies are properly incentivized to sort such matters out.”

While the UK government rejected Thomas Cook’s request for a bailout of about £150 million ($187 million), Johnson pledged to return stranded British holidaymakers.

Thomas Cook declared bankruptcy after failing to resolve a last-minute rescue deal over the weekend.

China’s Fosun Group had led a final bid to save the British firm and said on Monday it was “disappointed that Thomas Cook Group has not been able to find a viable solution for its proposed recapitalization with other affiliates.”

In the statement, Fosun confirmed its position remained unchanged throughout the process and extended their sympathy to those affected.

The CAA offered advice to passengers who had already booked Thomas Cook flights. “Customers currently overseas should not travel to the airport until their flight back to the UK has been confirmed on the dedicated website.”

“Thomas Cook customers in the UK yet to travel should not go to the airport as all flights leaving the UK have been canceled.”

Alex Jones and David Knight bring to light the documented plan for the government to survive the end of the world.