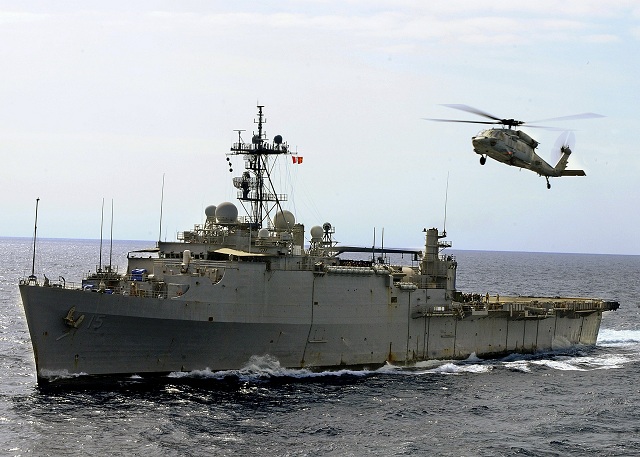 The U.S. Navy’s “mothership,” the USS Ponce, will serve as staging platform in the Persian Gulf.

Following a move by Iran to blunt an EU-imposed oil import embargo that went into effect on Sunday, the New York Times reports that the Pentagon has moved “significant military reinforcements” into the Persian Gulf to send a message to Iran’s leadership. The Pentagon announced the new influx of military hardware after Iran responded to the latest round of sanctions on the country.

On Monday, the Iranian parliament drafted a bill to block oil shipments to countries cooperating in sanctions. Ibrahim Agha Mohammadi, a member of the Parliament’s national-security and foreign-policy commission, said the legislation is an “emergency plan to block the strait” following the implementation of additional sanctions.

“What we can look forward to in the coming weeks and months is that the Iranians will make a series of moves, beginning with this bill in the Majlis,” investigative journalist Gareth Porter told Russia Today. Porter speculated that the Iranians may at first place a limited number of mines in the Gulf in order to raise the price of oil and wage economic war on the Western countries currently imposing sanctions in response to Iran’s unsubstantiated nuclear weapons program.

In 2008, Iran established a naval and air force base at Jask, adjacent to the Gulf. Iran’s Admiral Habibollah Sayyari said opening the base represented a new line of defense and is designed to block the Gulf. “In this region we are capable of preventing the entry of any kind of enemy into the strategic Persian Gulf if need be,” Sayyari said.

Christian Le Miere, a naval warfare specialist at the London-based International Institute for Strategic Studies, told RIA Novosti in late January Iran’s “fast missile boats do present a serious threat to merchant shipping. They would primarily use their fast boats and mines to threaten anything in the Gulf and the Strait of Hormuz.”

Iran’s Revolutionary Guards Corps also launched a new military drill this week. Dubbed the Great Prophet 7, the exercise provided an opportunity to test a new missile system capable of striking targets in Israel, according to The Wall Street Journal. In addition to hitting Israel’s Iron Dome missile-defense system, Iran boasted that the new ballistic missile, called Arm, is capable of hitting NATO targets in Turkey and ships in the Persian Gulf.

Over the last few weeks, the Pentagon has sent a large number of Navy ships into the Persian Gulf along with an array of warplanes, including F-22s and F-15Cs, which are capable of striking deep inside Iran as well as taking out its coastal missile batteries. The U.S. Navy has also moved a converted amphibious transport and docking ship, the Ponce, into the Gulf to serve as a floating staging base for Special Operations forces or “humanitarian assistance,” according to the Times.