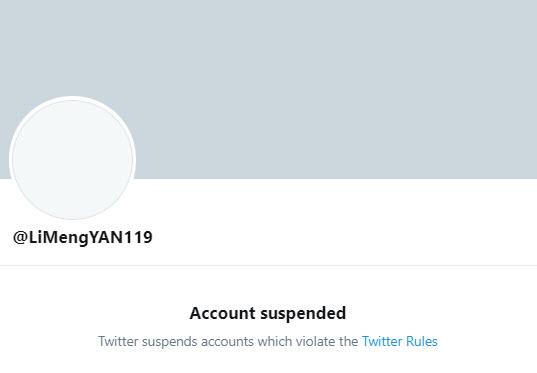 On Sunday afternoon we asked how long before the twitter account of the “rogue” Chinese virologist, Dr. Li-Meng Yan, who yesterday “shocked” the world of establishment scientists and other China sycophants, by publishing a “smoking gun” scientific paper demonstrating that the Covid-19 virus was manmade, is “silenced.”

We now have the answer: less than two days. A cursory check of Dr Yan’s twitter page reveals that the account has been suspended as of this moment.

The suspension took place shortly after Dr Yan had accumulated roughly 60,000 followers in less than 48 hours. The snapshot below was taken earlier in the day precisely in anticipation of this suspension.

It was not immediately clear what justification Twitter had to suspend the scientist who, to the best of our knowledge, had just 4 tweets as of Tuesday morning none of which violated any stated Twitter policies, with the only relevant tweet being a link to her scientific paper co-written with three other Chinese scientists titled “Unusual Features of the SARS-CoV-2 Genome Suggesting Sophisticated Laboratory Modification Rather Than Natural Evolution and Delineation of Its Probable Synthetic Route” which laid out why the Wuhan Institute of Virology had created the covid-19 virus.

While we appreciate that Twitter may have experienced pressure from either China, or the established scientist community, to silence Dr Yan for proposing a theory that flies in the face of everything that has been accepted as undisputed gospel – after all Twitter did just that to us – we are confident that by suspending her account, Jack Dorsey has only added more fuel to the fire of speculations that the covid virus was indeed manmade (not to mention countless other tangential conspiracy theories).

If Yan was wrong, why not just let other scientists respond in the open to the all too valid arguments presented in Dr. Yan’s paper? Isn’t that what “science” is all about? Why just shut her up?

Because if we have already crossed the tipping point when anyone who proposes an “inconvenient” explanation for an established “truth” has to be immediately censored, then there is little that can be done to salvage the disintegration of a society that once held freedom of speech as paramount.

For those who missed it, here is our post breaking down Dr. Yan’s various allegations which twitter saw fit to immediately censor instead of allowing a healthy debate to emerge.

We hope Twitter will provide a very reasonable and sensible explanation for this unprecedented censorship.

For those who missed it, her paper is below:

A Chinese scientist whistleblower exposes the latest scandal surrounding China’s cover-up of the coronavirus outbreak and its origins.