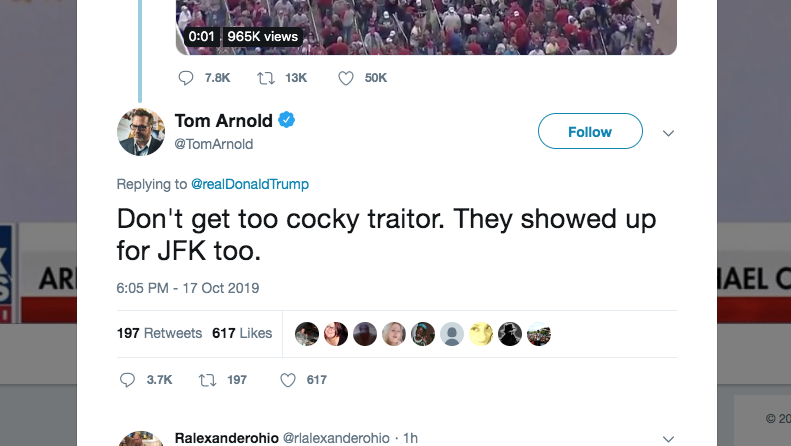 Actor Tom Arnold raised the prospect of another JFK-style assassination after Trump arrived in Dallas, Texas for an event at the American Airlines Center last night.

After Trump tweeted a video of the huge crowd that awaited him with the words, “Just arrived at the American Airlines Center in Dallas, Texas. Will be out shortly as we wait for more of you to get in! #TRUMP2020,” Arnold responded with a veiled threat.

“Don’t get too cocky traitor. They showed up for JFK too,” he tweeted.

The meaning of the tweet wasn’t hard to deduce given what happened to JFK in Dallas 56 years ago.

Other Twitter users also flagged the tweet to the Secret Service, with one commenting, “This imbecile is threatening the President of the United States.”

Arnold was previously interviewed by Secret Service agents over his anti-Trump tweets.

As we previously highlighted, the actor’s wife claimed that Arnold’s obsession with Donald Trump combined with his drug addiction led to the end of their marriage.

“Tom’s fixation on ‘taking down’ Donald Trump was an ongoing issue in our marriage,” said his wife, adding “For the past two years it has consumed his life and presented numerous safety issues for our family.”

She also accused the actor of “abuse of prescription drugs,” namely Phentermine and Fenfluramine.