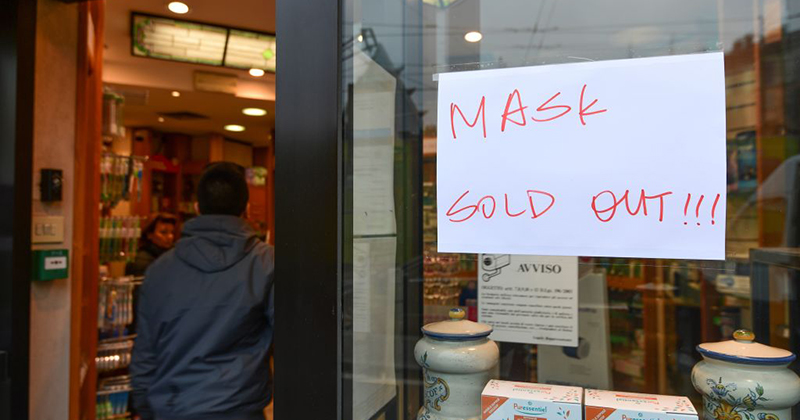 U.S. government officials are doing their best to keep the general population calm, but everyone can see what is happening in the rest of the world.

There are now empty store shelves in Italy just like there are in China.

People are waiting in extremely long lines to buy masks in South Korea just like we saw in Hong Kong.

And victims are literally collapsing in public in Iran just like we witnessed in Wuhan.

Mike Adams joins The Alex Jones Show to break down the latest news about the spread of coronavirus.

This coronavirus outbreak is rapidly becoming a true global pandemic, and the panic that this has caused on Wall Street resulted in a 1,031 point drop for the Dow Jones Industrial Average on Monday.

Fear is rising all over the planet, and many believe that it is just a matter of time before the same things that are happening elsewhere start happening here.

Originally, 99 percent of the confirmed cases were in China, but now the rest of the globe is starting to catch up.

In fact, the number of confirmed cases outside of China has gotten more than 10 times larger over the last three weeks.

If we continue to see that sort of exponential growth we will soon be facing a nightmare of epic proportions.

In Italy, the number of confirmed cases went from a handful to 229 in just a matter of days.  Authorities are desperate to stop this sudden outbreak, and so at this point much of northern Italy is being shut down…

Realizing that they may have to stay home for an extended period of time, many in northern Italy have been “panic buying” food…

People in several regions of Italy have reacted to coronavirus spreading throughout the country by panic buying, leaving some store shelves empty.

With 165 people infected, Italy has the most coronavirus victims out of any country in Europe. Five people have died.

Footage out of Milan shot yesterday shows some products almost or entirely out of stock.

Once this virus starts spreading rapidly inside the United States, the same thing will start happening here.

So you might want to take this opportunity to stock up on the things you will need while you still can.

In South Korea, the number of confirmed cases has now risen to 833, and the national government has raised the alert level to the highest possible level…

Meanwhile, South Korea reported another spike in new coronavirus cases on Monday, bringing its total to 833 cases with seven deaths. South Korean President Moon Jae-in has raised the national alert level for the virus to “highest,” the first time the country has done so in 11 years.

Just like we have seen elsewhere in Asia, demand for face masks is off the charts.  In fact, at one South Korean store there were literally “hundreds of people” lined up around the block to buy masks…

Aerial footage shows hundreds of people lining up around the block to buy face masks in Daegu as most of the new South Korean cases of coronavirus were traced to the city.

Here in the U.S., there will come a point where masks are not available for the general public at all if this outbreak gets bad enough.

So if you think that you may need masks, you should grab them now while you still can.

The other day my wife checked our local Home Depot, and there were only a few left on the shelves.  They are still available in most areas, but supplies are definitely getting tighter.

In Iran, it is being claimed that infected people are literally collapsing in the streets, and one Iranian politician is saying that the true death toll is far higherthan the government is reporting…

CORONAVIRUS has claimed the lives of “50 people” in just one single Iranian city, a politician has claimed, accusing the government of covering up the true seriousness of the outbreak.

And one expert in infectious diseases has suggested the country could become a “hotspot” for “seeding” countries outside Iran with the virus, officially known as Covid-19. The Iranian Government this morning put the total number of deaths for the entire country at 12 – but Ahmad Amirabadi Farhani, a Parliamentary representative for the city of Qom, insisted the true figure was many times higher. The semi-official ILNA news agency reported Mr Farhani as saying: “Up until last night, around 50 people died from coronavirus. The health minister is to blame.”

If that is accurate, that is an extremely ominous sign.

This certainly has the potential to become a truly horrifying global pandemic, and the World Health Organization is warning that the world is “not ready for a major outbreak”…

As new cases of the coronavirus spiked on two continents, the World Health Organization warned on Monday that the world was not ready for a major outbreak, even as it praised China’s aggressive efforts to wrest the epidemic under control.

After two weeks on the ground in China, a team sent by the W.H.O. concluded that the draconian measures China imposed a month ago may have saved hundreds of thousands of people from infection. Such measures — sealing off cities, shutting down businesses and schools, ordering people to remain indoors — have provoked anger in China and could be difficult to replicate in democratic countries with a greater emphasis on protecting civil liberties.

Despite all of the measures that have been taken to control the spread of this virus, it just continues to pop up in more areas around the globe.

So how bad could this outbreak eventually become?

Well, Harvard epidemiology professor Marc Lipsitch believes that “40 to 70 percent of people around the world will be infected” by the time this crisis is over…

In an article entitled You’re Likely to Get the Coronavirus, the Atlantic explains how the coronavirus is particularly dangerous because it may cause cause no symptoms at all in many carriers of the infection.

According to Harvard epidemiology professor Marc Lipsitch, this contributes to his prediction that coronavirus “will ultimately not be containable.”

“Lipsitch predicts that, within the coming year, some 40 to 70 percent of people around the world will be infected with the virus that causes COVID-19,” reports the Atlantic.

If that projection ends up being accurate, the death toll will be in the millions.

We should truly hope that Lipsitch and the other experts that are warning of imminent doom are dead wrong.

But we would also be exceedingly foolish to completely ignore their warnings.

These scientists have been studying infectious diseases throughout their entire careers, and now they are telling us that the next great global pandemic has arrived.

If that is true, all of our lives are about to change in a major way.

Personally, I am still hoping for the best, but I am also checking the latest numbers coming in from all over the globe multiple times per day.