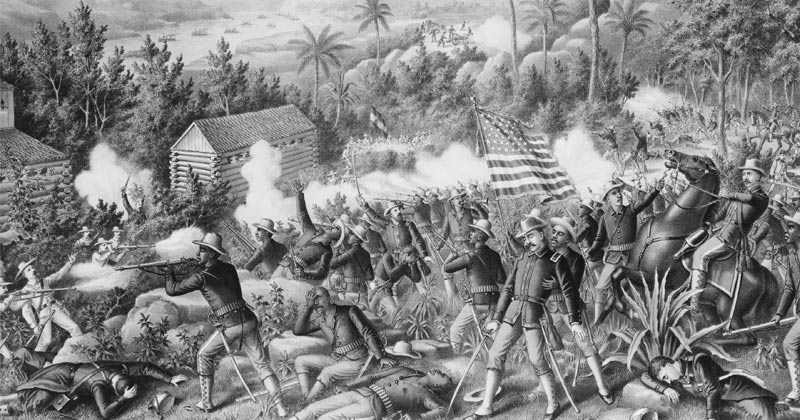 The year 1898 was a landmark in American history. It was the year America went to war with Spain—our first engagement with a foreign enemy in the dawning age of modern warfare. Aside from a few scant periods of retrenchment, we have been embroiled in foreign politics ever since.

Starting in the 1880s, a group of Cubans agitated for independence from Spain. Like many revolutionaries before and after, they had little real support among the mass of the population. Thus they resorted to terrorist tactics—devastating the countryside, dynamiting railroads, and killing those who stood in their way. The Spanish authorities responded with harsh countermeasures.

Some American investors in Cuba grew restive, but the real forces pushing America toward intervention were not a handful of sugarcane planters. The slogans the rebels used—”freedom” and “independence”—resonated with many Americans, who knew nothing of the real circumstances in Cuba. Also playing a part was the “black legend—the stereotype of the Spaniards as bloodthirsty despots that Americans had inherited from their English forebears. It was easy for Americans to believe the stories peddled by the insurgents, especially when the “yellow” press discovered that whipping up hysteria over largely concocted Spanish “atrocities”—while keeping quiet about those committed by the rebels—sold papers.

Politicians on the lookout for publicity and popular favor saw a gold mine in the Cuban issue. Soon the American government was directing notes to Spain expressing its “concern” over “events” in Cuba. In fact, the “events” were merely the tactics colonial powers typically used in fighting a guerrilla war. As bad or worse was being done by Britain, France, Germany, and others all over the globe in that age of imperialism. Spain, aware of the immense superiority of American forces, responded to the interference from Washington by attempts at appeasement, while trying to preserve the shreds of its dignity as an ancient imperial power.

When William McKinley became president in 1897, he was already planning to expand America’s role in the world. Spain’s Cuban troubles provided the perfect opportunity. Publicly, McKinley declared, “We want no wars of conquest; we must avoid the temptation of territorial aggression.” But within the US government, the influential cabal that was seeking war and expansion knew they had found their man. Senator Henry Cabot Lodge wrote to Theodore Roosevelt, now at the Navy Department, “Unless I am profoundly mistaken, the Administration is now committed to the large policy we both desire.” This “large policy,” also supported by Secretary of State John Hay and other key figures, aimed at breaking decisively with our tradition of nonintervention and neutrality in foreign affairs. The United States would at last assume its “global responsibilities,” and join the other great powers in the scramble for territory around the world.

The leaders of the war party camouflaged their plans by speaking of the need to procure markets for American industry, and were even able to convince a few business leaders to parrot their line. But in reality none of this clique of haughty patricians—”old money,” for the most part—had any strong interest in business, or even much respect for it, except as the source of national strength. Like similar cliques in Britain, Germany, Russia, and elsewhere at the time, their aim was the enhancement of the power and glory of their state.

In order to escalate the pressure on Spain, the battleship USS Maine was dispatched to Havana’s harbor. On the night of February 15, the Maine exploded, killing 252 men. Suspicion immediately focused on the Spaniards—although they had the least to gain from the destruction of the Maine. It was much more likely that the boilers had blown up—or even that the rebels themselves had mined the ship, to draw America into a war the rebels could not win on their own. The press screamed for vengeance against perfidious Spain, and interventionist politicians believed their hour had come.

McKinley, anxious to preserve his image as a cautious statesman, bided his time. He pressed Spain to stop fighting the rebels and start negotiating with them for Cuban independence, hinting broadly that the alternative was war. The Spaniards, averse to simply handing the island over to a terrorist junta, were willing to grant autonomy. Finally, desperate to avoid war with America, Madrid did proclaim an armistice—a stunning concession for one sovereign state to make at the bidding of another.

But this was not enough for McKinley, who had his eyes set on bagging a few of Spain’s remaining possessions. On April 11, he delivered his war message to Congress, carefully omitting to mention the concession of an armistice. A week later, Congress passed the war resolution McKinley wanted.

In the Far East, Commodore George Dewey was given the go-ahead to carry out a prearranged plan: proceed to the Philippines and secure control of Manila’s harbor. This he did, bringing along Emilio Aguinaldo and his Filipino independence fighters. In the Caribbean, American forces quickly subdued the Spaniards in Cuba, and then, after Spain sued for peace, went on to take over Puerto Rico as well. In three months, the fighting was over. It had been, as Secretary of State John Hay famously put it, “a splendid little war.”

The quick US trouncing of decrepit Spain filled the American public with euphoria. It was a victory, people believed, for American ideals and the American way of life against an Old World tyranny. Our triumphant arms would guarantee Cuba a free and democratic future.

Against this tidal wave of public elation, one man spoke out. He was William Graham Sumner—Yale professor, famed social scientist, and tireless fighter for private enterprise, free trade, and the gold standard. Now he was about to enter his hardest fight of all.

On January 16, 1899, Sumner addressed an overflow crowd of the Yale chapter of Phi Beta Kappa. He knew that the assembled Yalies and the rest of the audience were brimming with patriotic pride. With studied irony, Sumner titled his talk “The Conquest of the United States by Spain.”

Sumner threw down the gauntlet:

We have beaten Spain in a military conflict, but we are submitting to be conquered by her on the field of ideas and policies. Expansionism and imperialism are nothing but the old philosophies of national prosperity which have brought Spain to where she is now.

Sumner proceeded to outline the original vision of America cherished by the Founding Fathers, radically different from what prevailed among the nations of Europe:

They would have no court and no pomp; nor orders, or ribbons, or decorations, or titles. They would have no public debt. There was to be no grand diplomacy, because they intended to mind their own business, and not be involved in any of the intrigues to which European statesmen were accustomed. There was to be no balance of power and no “reason of state” to cost the life and happiness of citizens.

This had been the American idea, our signature as a nation: “It is by virtue of this conception of a commonwealth that the United States has stood for something unique and grand in the history of mankind, and that its people have been happy.”

The system the Founders bequeathed to us, Sumner held, was a delicate one, providing for the division and balance of powers and aimed at keeping government small and local. It was no accident that Washington, Jefferson, and the others who created the republic issued clear warnings against “foreign entanglements.” A policy of foreign adventurism would, in the nature of things, bend and twist and ultimately shatter our original system.

As foreign affairs became more important, power would shift from communities and states to the federal government, and, within that, from Congress to the president. An ever busy foreign policy could only be carried out by the president, often without the knowledge of the people. Thus, the American system, based on local government, states’ rights, and Congress as the voice of the people on the national level, would more and more give way to a bloated bureaucracy headed by an imperial presidency.

But now, with the war against Spain and the philosophy behind it, we were letting ourselves in for the old European way, Sumner declared—”war, debt, taxation, diplomacy, a grand governmental system, pomp, glory, a big army and navy, lavish expenditures, political jobbery—in a word, imperialism.”

Already, it seems, the global meddlers had come up with what was to be their favorite smear word: “isolationist.” And already Sumner had the appropriate retort. The imperialists “warn us against the terrors of ‘isolation,'” he said, but “our ancestors all came here to isolate themselves” from the burdens of the Old World. “When the others are all struggling under debt and taxes, who would not be isolated in the enjoyment of his own earnings for the benefit of his own family?”

In abandoning our own system, there would be, Sumner freely admitted, compensations. Immortal glory is not nothing, as the Spaniards well knew. To be a part, even a pawn, in a mighty enterprise of armies and navies, to identify with great imperial power projected around the world, to see the flag raised on victorious battlefields—many peoples in history thought that game well worth the candle.

Only—only, it was not the American way. That way had been more modest, more prosaic, parochial, and, yes, middle class. It was based on the idea that we were here to live out our lives, minding our own business, enjoying our liberty, and pursuing our happiness in our work, families, churches, and communities. It had been the “small policy.”

There is a logic in human affairs, Sumner the social scientist cautioned—once you make a certain decision, some paths that were open to you before are closed, and you are led, step-by-step, in a certain direction. America was choosing the path of world power, and Sumner had little hope that his words could change that. Why was he speaking out then? Simply because “this scheme of a republic which our fathers formed was a glorious dream which demands more than a word of respect and affection before it passes away.”

Hillary believes she has three covert roads to the White House.