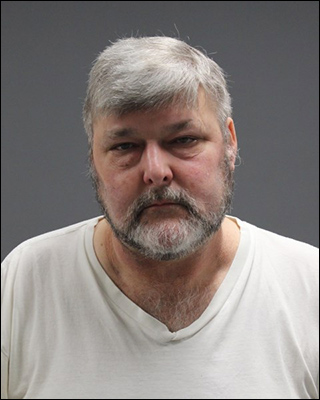 A teacher at a Massachusetts public school was arrested last week, accused of planting a live bullet inside the facility to blame students.

Southbridge Middle/High School Biology teacher Alfred Purcell III, 57, was caught on film appearing to toss a live round of 9mm ammo in the corner of a stairwell.

Moments later he’s seen returning to the area and taking out his cell phone to snap a photo of the bullet, before notifying school officials who contacted the school resource officer.

The school was placed on lockdown for an hour while police reviewed footage to find the culprit.

Lo and behold they discovered Purcell might have been responsible.

Upon searching his vehicle, police found 102 live rounds of .20 gauge shot gun ammunition. They also discovered he had an expired Conncecticut license to carry.

Police claim when questioned Purcell admitted to dumping the ammo in efforts to get metal detectors installed at the school.

“After learning and gathering all that evidence, our police officers arrested Mr. Purcell on scene, transported him to police headquarters, and during the booking process he had said that, he admitted that he had dropped that round of ammunition,” Southbridge Police Chief Shane Woodson said. “He said the reason why he did it is because he believes that the school needs to have metal detectors.”

Despite the damning footage and Purcell basically confessing his guilt to police, his defense attorney claimed “there was a misunderstanding and that Purcell did not plant the round in the stairwell,” according to CBS Boston.

The Southbridge superintendent was outraged at Purcell’s alleged actions.

“I’m appalled,” said Superintendent Jeffrey Villar. “This individual acted in a disgusting manner. I feel very badly for our students because its an adult that has failed them. A lot of our children have plenty of hardship and they need adults to help them.”

“It’s absolutely abhorrent that this individual decided to try to make a case in such a manner that demonstrated horrible judgement and really does a massive disservice to our children. They deserve much better.”

According to local newspaper The Citizen Chronicle, Purcell is charged with: “two counts of unlawful possession of ammunition; two counts of carrying ammunition on school grounds; disturbing a school assembly; disorderly conduct and disturbing the peace.”

He’s been placed on leave and ordered not to return to school grounds.

Notably a student did cause a lockdown earlier in the week after bringing spent rounds of ammo to school, which police say might have given Purcell the idea in the first place.