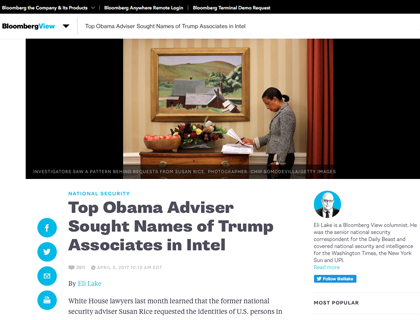 PBS host Judy Woodruff asked Rice to explain why House Intelligence Committee Chairman Devin Nunes would level allegations that Trump’s team may have been surveilled under the Obama administration.

“I know nothing about this,” Rice responded. “I was surprised to see reports from Chairman Nunes on that count today.”

Rice, Obama’s former National Security Advisor, went on to say that “no president, no White House can order the surveillance of another American citizen,” but that “legal, lawful” incidental collection may have occurred.

Woodruff referred Rice to the New York Times article which admitted that Obama allowed individuals to disseminate information throughout the government about what they knew about Trump and Russia.

“Could there be a connection there?” Woodruff asked.

“I’m not aware of any connection,” she said. “I read the New York Times story. I must say, Judy, as one of the most senior White House officials and the most senior responsible for national security, I found that report a bit perplexing.”

“I wasn’t aware of any orders given to disseminate that kind of information.”

However, White House lawyers discovered in a National Security Council review that Rice requested the identities of U.S. persons connected to Trump’s team dozens of times.

The establishment and MSM pushed back hard on Trump after he asserted that Obama “wiretapped” him and his team at Trump Tower last month, with several members of Congress and the intelligence community consequently denying any wiretapping took place.

But cracks have been forming around the denials, especially after Obama’s former Deputy Assistant Secretary of Defense Evelyn Farkas recently admitted on MSNBC that Obama did in fact spy on Trump in order to gather “intelligence” for political purposes.