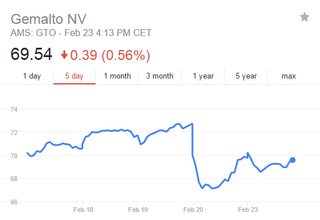 Apparently, execs at Gemalto went to the same crisis management training program as the top execs at Lenovo. As you probably recall, last week The Intercept revealed that the NSA and GCHQ had hacked into the systems at Gemalto, the world’s largest maker of SIM cards for mobile phones, in order to get access to their encryption keys. This is a pretty massive security breach, allowing these intelligence agencies to decrypt calls that people thought were encrypted. But Gemalto insists its SIM cards are perfectly secure:

“Initial conclusions already indicate that Gemalto SIM products (as well as banking cards, passports and other products and platforms) are secure and the Company doesn’t expect to endure a significant financial prejudice.”

This sounds an awful lot like Lenovo’s initial reaction to the reports about the Superfish/Komodia vulnerability it shoved onto many of its customers computers, saying (totally incorrectly):

We have thoroughly investigated this technology and do not find any evidence to substantiate security concerns.

Lenovo, at least, pretty quickly changed its tune and admitted to it being a major problem. Of course, there are some differences here. With Lenovo, the company had made the choice to include Superfish — whereas the Gemalto hacking was done (obviously) without the company’s knowledge. You’d hope that the company would be much more upfront about the seriousness of the issue, rather than insisting that everything is just fine and dandy.

Of course, it’s that last phrase — about not having to “endure a significant financial prejudice” — that shows what’s really going on. Gemalto’s stock price took a huge hit, and the company is trying to assure investors that everything is okay — not necessarily its customers. See if you can tell when the news about this came out?

So now the question is, which is more important to Gemalto? Keeping its stock price up or its users secure?