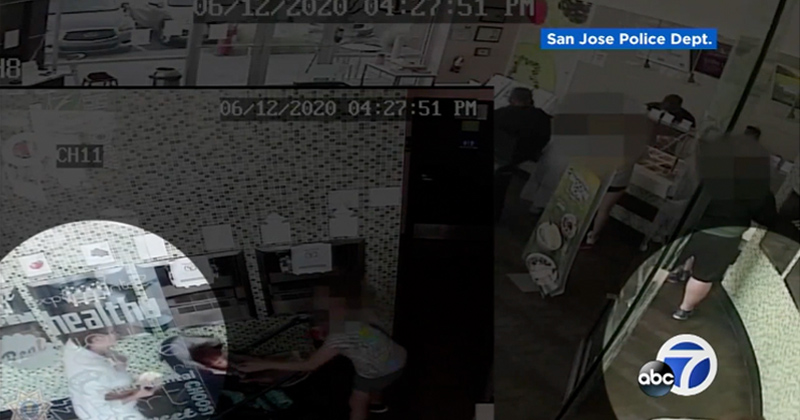 A woman wearing a face mask was caught on camera lowering the mask to cough on a baby inside a California yogurt shop, upset the baby’s mother was allegedly violating social distancing rules.

Security footage inside Yogurtland in San Jose shows the woman walk into the shop and get in line, before another woman pushing a baby stroller gets in line behind her.

The lady pushing the stroller does not appear to notice she’s gone beyond a pink line on the floor designating six feet of distance between customers.

Surveillance video shows the mother is called out by the angry woman, who points and tells her to obey the pink line.

Upset the mother doesn’t immediately abide by the line, the woman pulls her face mask down below her mouth and proceeds to cough on the 1-year-old child in the stroller.

“It happened so quick I was in shock,” the baby’s mother, Mireya Mora, told KGO. “She got close, she took off her mask, and she coughed three times super hard on my son’s face.”

“She coughed on him super-hard. It wasn’t an accident… A person with a heart that cares would not do that to a baby,” Mora said, attributing the incident to possible racism on the woman’s part.

Police are looking at filing assault charges once they locate the woman. They released a description to get the public’s help in finding her:

Owen explains why patriots must stand against the peer pressure and refuse to wear mask or welcome slavery.