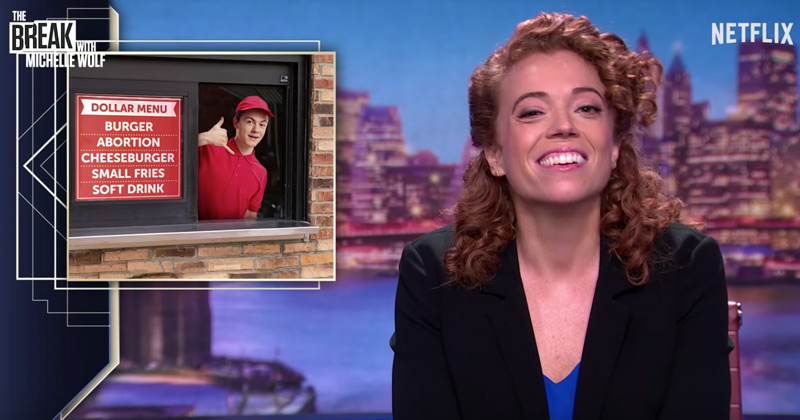 A new show on Netflix hosted by comedian Michelle Wolf celebrated the murder of babies in the womb.

In its latest episode, “The Break with Michelle Wolf” threw a star-spangled tribute to abortion, as liberals fear Roe v. Wade could be overturned by President Trump’s new Supreme Court pick.

Wolf’s act included “jokes” claiming abortion is not killing a baby, but instead like going back in time: “Some people say abortion is killing a baby. It’s not; it’s stopping a baby from happening. It’s like Back to the Future and abortion is the DeLorean. And everyone loves DeLoreans. ”

She also claimed there’s no such thing as someone who is pro-life: “And, I know, some people call themselves ‘pro-life’- but, ‘pro-life’ is a propaganda term that isn’t real, like healthy ice cream and handsome testicles.”

Abortions, Wolf said, should be obtained as easily as getting a burger off the dollar-menu at McDonald’s.

Wolf went on to cheer with a marching band as she threw glitter every time she mentioned abortion:

“Abortion, I salute you!

“Women, if you need an abortion, get one!

“If you want an abortion, get one!

“If you’re not pregnant but you think you eventually might be and want to order a future abortion, get one!

“If you’re pregnant and you want to be pregnant, don’t get one!

“And women, don’t forget: you have the power to give life and men will try to control that – don’t let them!

Wolf’s biggest accolade is hosting the White House correspondence dinner where she made several vile jokes at the expense of members of the Trump administration in attendance.

President Trump will announce his choice to replace Justice Anthony Kennedy’s position on the Supreme Court on Monday evening.