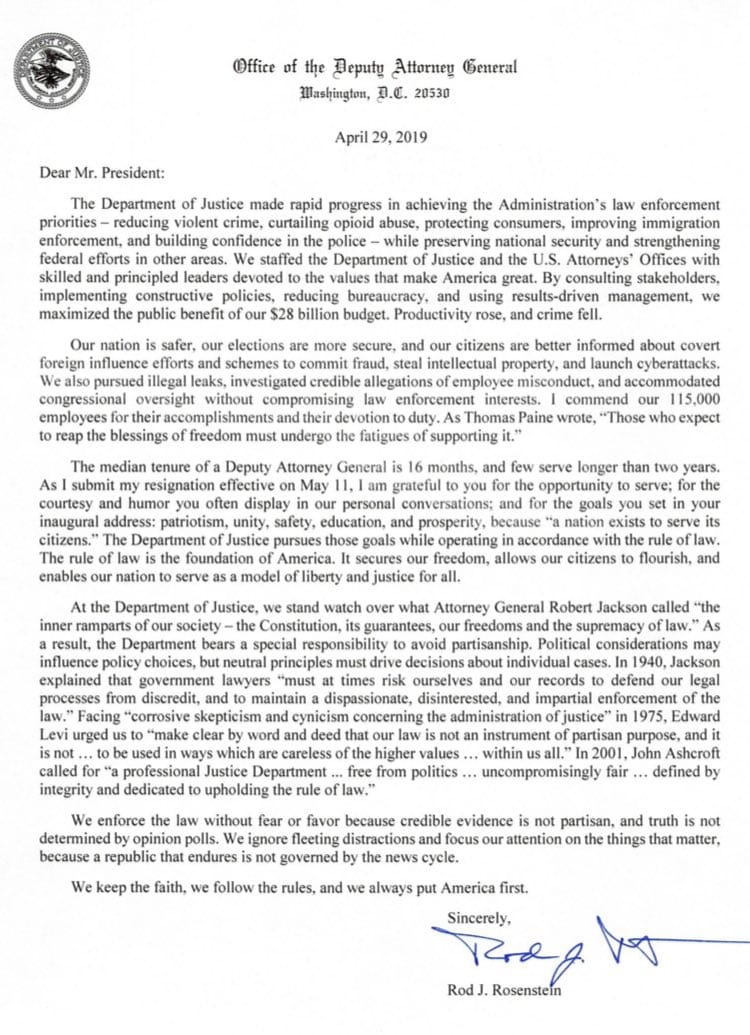 Deputy Attorney General Rod Rosenstein has submitted his letter of resignation to President Trump on Monday.

Rosenstein, who served as Deputy AG since 2017 and appointed FBI Special Counsel Robert Mueller to investigate Russian government “interference” in the 2016 presidential election, said his resignation would be effective May 11.

The letter praised Trump for his commitment to making America great again, and assured him that the Department of Justice was meant as a vehicle of law and order, free from political influence.

“The Department of Justice pursues those goals while operating in accordance with the rule of law,” Rosenstein wrote.

“The rule of law is the foundation of America. It secures our freedom, allows our citizens to flourish, and enables our nation to serve as a model of liberty and justice for all.”

Rosenstein also took a jab at the mainstream corporate media for their role in perpetuating fake news during Mueller’s wide-ranging 2-year investigation.

“We enforce the law without fear or favor because credible evidence is not partisan, and truth is not determined by opinion polls,” Rosenstein wrote.

“We ignore fleeting distractions and focus our attention on the things that matter, because a republic that endures is not governed by the news cycle.”

Rosenstein’s exit seemed inevitable after fired Deputy FBI Director Andrew McCabe confirmed in February that he proposed surreptitiously wearing a wire around Trump, and discussed using the 25th Amendment to unseat him.

Read the letter below:

President Trump delivered a speech to the NRA and also gave Sean Hannity an interview covering his plans to go after the Deep State. Alex breaks down the critical breaking news that the President is about to drop the hammer on the enemies of America.