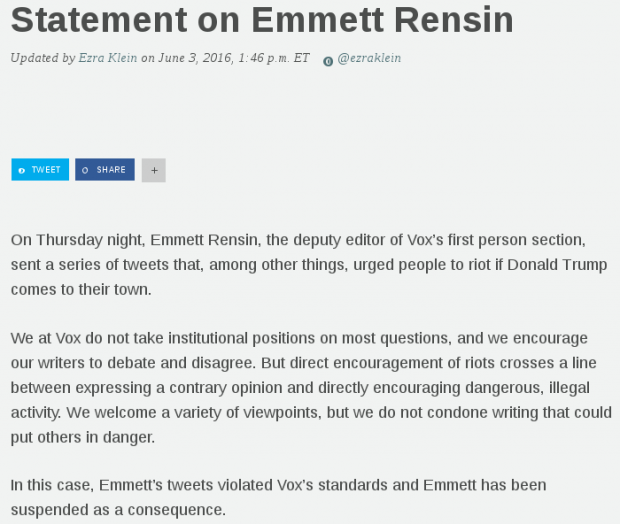 An editor for left-wing media outlet Vox was suspended Friday after a tweet promoting riots at Trump rallies allegedly violated the company’s “standards.”

Emmett Rensin, the deputy editor of Vox’s first person section, sparked outrage after telling his followers to “start a riot” if Trump comes to speak in their town.

Advice: If Trump comes to your town, start a riot.

A statement released by Vox founder Ezra Klein shortly after argued that “direct encouragement of riots crosses a line between expressing a contrary opinion and directly encouraging dangerous, illegal activity.”

“We welcome a variety of viewpoints, but we do not condone writing that could put others in danger,” Klein wrote. “In this case, Emmett’s tweets violated Vox’s standards and Emmett has been suspended as a consequence.”

Despite attempts by Vox to distance itself from employees who paint riots in a favorable light, Twitter users were quick to point to what they saw as hypocrisy from the company.

In April of 2015 Klein himself sent out an article on Twitter by Vox writer Jenée Desmond-Harris in which “Baltimore residents who didn’t riot explain why they’re okay with those who did.”

Baltimore residents who didn’t riot explain why they’re okay with those who did: http://t.co/jBQVtXtvMi pic.twitter.com/BtXrmOMW1y

“They may not have participated in or celebrated the violence — the looting, the setting fires, the destruction of local businesses — but they’re acutely aware that these things are exactly what forced a flood of national news outlets to show up where they live,” Desmond-Harris wrote.

One Twitter user responded at the time by asking if black-business owners were also interviewed by Vox after their livelihoods were destroyed by their own customers.

@ezraklein did your reporters ask these folks if they’re ok with the rioting? http://t.co/6gpZ52vT3r

“Riots can lead to real, substantial change,” German wrote. “We see some of this in media coverage today: Baltimore is certainly getting a lot more attention following the looting and fires.”

Yet articles legitimizing the destruction of other people’s property by left-leaning media outlets is unsurprising.

A 2014 article published by Time.com entitled “Ferguson: In Defense of Rioting” also tried to legitimize the act.

“The violent protests in Ferguson, Mo., are part of the American experience,” Darlena Cunha wrote. “Peaceful protesting is a luxury only available to those safely in mainstream culture.”