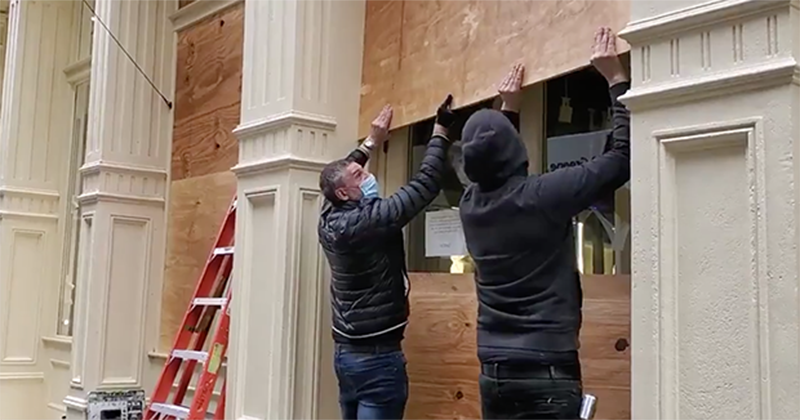 High-end stores across the country have been boarding up their stores in anticipation of civil unrest due to the Chinese coronavirus pandemic.

In Beverly Hills, the Pottery Barn and West Elm stores near Rodeo Drive were spotted with boards across the windows according to TMZ.

Alex Jones is on air now covering this important story and others!

The “Magnificent Mile” in Chicago today. It looks like Chile in November. All fancy stores boarded up. Are they afraid of #Covid19 or of something else? @DMatamala pic.twitter.com/Ag2SU2iJ2a

John Mark joins Alex Jones to break down the idea of propertarianism and how it guards against tyranny.

San Francisco looks like a town expecting a Hurricane, with storefronts boarded up, and people lining up at stores, while others wander around without any apparent destination or plan, as if propelled by Brownian motion.

Everyone is waiting for Hurricane Covid-19 to crest. pic.twitter.com/XseFzhSuts

Sad sight of a restaurant being boarded up in Canterbury. pic.twitter.com/oj05FbCWc9

Couple of @ThePlazaKC stores now boarded up during the shelter in place order pic.twitter.com/qq77n7JE9Q

Weeks ago, reporter Savannah Hernandez covered how businesses in downtown Austin, Texas, were already preparing by boarding up store windows.