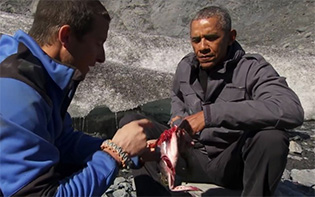 President Barack Obama, who has appeared on a reality TV show, imparted to the American people Wednesday that the race to the presidency is not “reality TV.”

Appearing as a guest on NBC’s Tonight Show for his 7th time, Obama intimated he would attempt to unite his party against Donald Trump – a candidate whom he claims the Democrat party is happy with.

“The main role I’m gonna be playing in this process is to remind the American people that this is a serious job. You know, this is not reality TV,” Obama jabbed at Trump when asked whether Bernie Sanders would ever throw his support behind Hillary Clinton.

Obama had previously only appeared in a “slow jam” skit with Fallon, but has been a guest on “Jimmy Kimmel Live,” “The Late Show With David Letterman,” “The Daily Show” and “The Colbert Report” throughout his 7-year tenure.

The president’s comments regarding reality TV and the presidency are quizzical given the fact Obama himself has been criticized for appearing on reality TV.

Confronted about a deleted tweet in which Spade asked, “Why is Obama on Bear Grills trying to survive in the tundra?”, the Joe Dirt actor said the president and First Lady’s craving for media attention came off “a bit thirsty.” 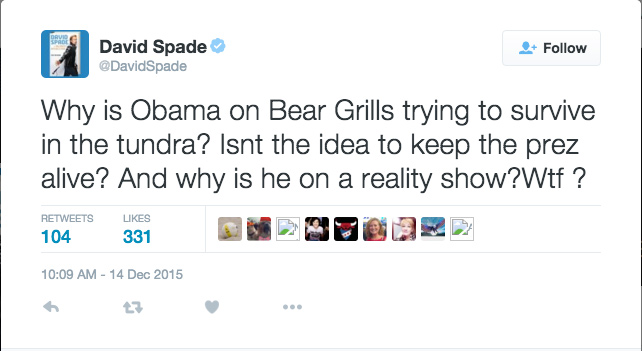 “I criticized Obama because I thought, you know, a president should have a little more dignity than… I mean I realize Woodrow Wilson went on Dancing With the Stars once,” Spade joked to entertainment gossip site TMZ.

“But what president does reality shows? It just sounds weird to me, you know what I mean? It’s just too much,” Spade said.

“I think that Michelle Obama’s on Ellen more than I am,” the Emperor’s New Groove voice actor told TMZ. “It’s just a new world. It’s just I’m not used to it… It just seems a bit thirsty for me.”

“He’s on GQ, I’m like, ‘Leave that to Bradley Cooper,’” Spade continued. “You don’t need to go… You’re the president, you’re above all of us. You’re above stars, you’re above everything. When he’s trying to get in the mix like, ‘I want to present at the MTV awards,’ it’s like, ‘Alright, guy. Relax. You’ve got it.’”