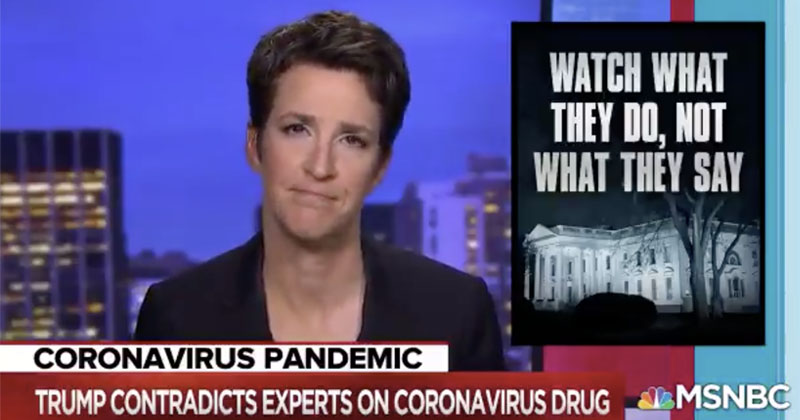 As President Trump’s approval numbers climb over his response to the growing coronavirus pandemic, the mainstream media has begun to call for censoring his White House briefings.

“If Trump is going to keep lying like he has been every day on stuff this important, we should, all of us, stop broadcasting it. Honestly, it’s going to cost lives,” Maddow said on “The Rachel Maddow Show.”

Maddow: If Trump is going to keep lying like he has been every day on stuff this important, we should, all of us, stop broadcasting it. Honestly, it's going to cost lives. pic.twitter.com/tMvyrE3YTK

But Maddow isn’t the only leftist concerned about Trump’s near-daily White House briefings.

An op-ed in The Boston Globe called for the same thing, claiming that Trump is putting the American people in danger by spreading “misinformation.”

And an op-ed in The Nation claims networks are helping Trump disseminate racism when he refers to the Wuhan coronavirus as the “Chinese virus.”

CNN even went so far as to claim that Trump was offering the American people false hope in a bizarre op-ed.

The more direct communication Trump has with the American people amid the coronavirus pandemic, the less power the media has to whip up hysteria and panic.

Its gonna be the Chinese Century come hell or high water, and it couldn’t have been telegraphed any clearer.