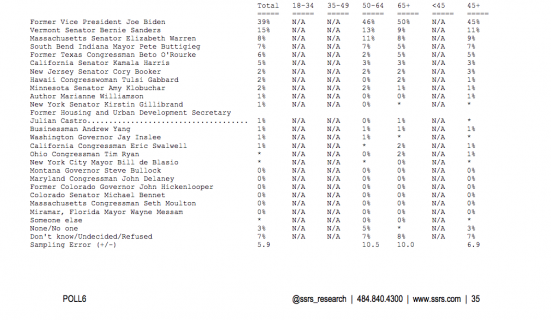 A CNN-sanctioned poll oversampled Baby Boomers and Gen Xers while practically ignoring young voters in a poll that showed Joe Biden with a huge lead in the 2020 Democratic primary, an activist claims.

An image shared by a Bernie Sanders activist shows the age breakdown from a Democratic subgroup of a recent poll, and interestingly, ages under 50 are marked with a ‘N/A’ or ‘Not Applicable,’ suggesting there wasn’t enough respondents under 50 to factor into the poll.

This is absurd. CNN’s poll showing a “huge bump” for Biden didn’t poll people under 50 (or not enough to factor in). Biden has next to no support under 50 and millennials are the biggest voting bloc in 2020. This is effectively CNN lying to the public. Look at the data yourself: pic.twitter.com/01DzyQbVum

The image probably came from Page 35 of a CNN poll published on April 30th, which lists a breakdown of respondents who “are Democrats/Democratic-leaning independents and are registered to vote:”

If the poll is oversampled, as the activist claims, it could explain why Biden would be so far ahead of Bernie Sanders, given that Sanders enjoys strong support from young voters.

It’s also worth noting that Biden is currently the establishment’s choice.

While the activist first made the claims around April 30th, it’s barely been mentioned in the media – and the story itself offers a peek inside the ongoing fracturing of the Democratic Party, particularly with a plurality of Bernie Sanders supporters outright rejecting Biden.

Joe Biden is an out of touch corporatist with a terrible record, an Anita Hill problem, a MeToo problem, a millennial problem, a plagiarism problem, & he says something disqualifying every day.

“Unless the Democratic field is winnowed by the night of the Iowa caucuses, I believe there will be a brokered convention because no Democrat will have a majority of delegates to get the nomination,” wrote a guest columnist for the Des Moines Register. “That means negotiations will have to take place at the convention and all kinds of deals made until one Democrat gets the requisite number.”

The tide is turning against the conspirators behind the Russiagate hoax.