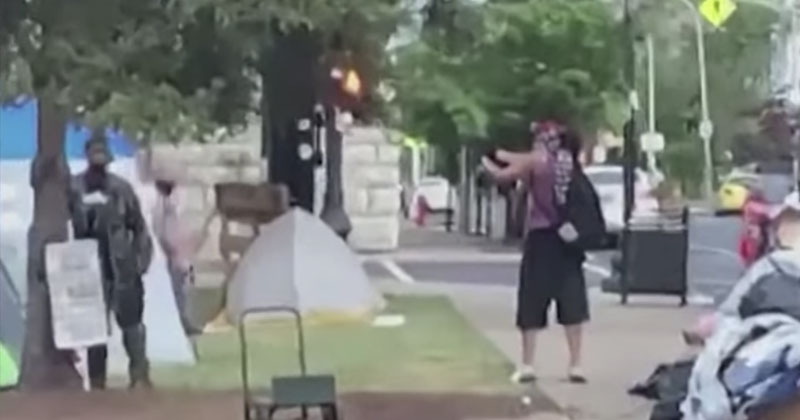 Shocking videos have surfaced on social media, show the chaos that unfolded on Saturday evening at a park in Louisville, Kentucky, where a man opened fire on demonstrators who had gathered to protest the death of Breonna Taylor, reported The Epoch Times.

At least one person was killed, and another injured at Jefferson Square Park around 9 pm, the Louisville Metro Police Department (LMPD) said in a statement, adding that shortly after gunshots rang out in the park, sheriffs arrived on scene to conduct life-saving measures on a male who eventually died. A second shooting victim was found at the Hall of Justice near the park, who suffered non-life-threatening injuries.

Just about 9 p.m., there were reports of shots fired in Jefferson Square Park. Calls then came in that Sheriff’s Department personnel were in the park performing life-saving measures on a male who eventually died at the scene.

Videos of the incident were posted on social media, several uploaded to YouTube, show a man opening fire at the perimeter of the park. He unloaded a clip into the demonstration area – as he fired the third round, it appears someone returned fire with a larger caliber weapon.

At the end of the video, one of the shooting victims was bleeding on the ground. A man dressed in all black wielding an AR-15 or a variant of the rifle was seen in the final seconds of the clip – still, there’s no conclusive evidence of who returned the fire.

LMPD said an investigation into the shooting was launched immediately:

“We’re trying to gather as much information as possible to identify all who were involved in the incident.”

Mayor Greg Fischer tweeted: “I am deeply saddened by the violence that erupted in Jefferson Square Park tonight, where those who have been voicing their concerns have been gathered… “It is a tragedy that this area of peaceful protest is now a crime scene.”

The park has been the epicenter of demonstrations in Louisville for weeks after the police killings of Taylor and George Floyd.

Venezuela, Cuba, Eastern Europe – toppling statues to topple civilizations. Those tearing down statues understand the value of what they represent. Do we?