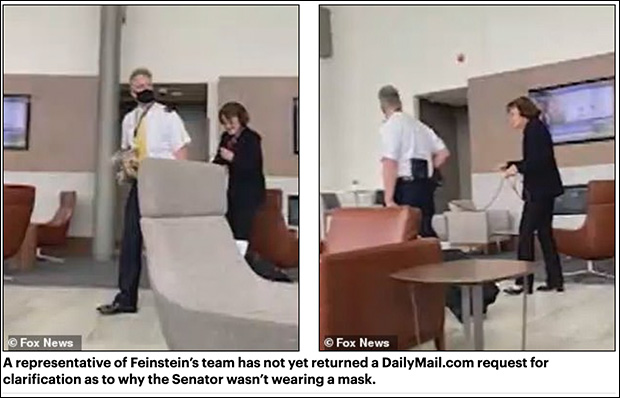 Photos obtained by Fox News’ Tucker Carlson appear to show Sen. Dianne Feinstein (D-Calif.) walking through an airport terminal without a face mask, despite her pushing for new FAA mask rules and a nationwide mask mandate.

The photos, displayed on Tucker’s show Monday night, feature the 87-year-old Feinstein smiling as she makes her way through a private terminal at Dulles International Airport in Washington DC last Friday, as a pilot walks alongside her wearing a face mask and carrying bags and a small dog.

The damning photos follow months of activism from Feinstein – who’s notably in the highest-risk demographic – accusing airports and airlines of enacting a “patchwork of rules” which she claims “have only sowed confusion among passengers,” along with calls to “issue clear, nationwide, mandatory mask requirements for all aviation employees and travelers.”

We need a nationwide mask mandate immediately for airplanes, airports and public transit. It’s clear that masks help slow the spread of this virus, so ahead of the Fourth of July, we must ensure we're doing all we can to slow the surge of cases. https://t.co/HLAU08HyCC

Wearing masks in public should be mandatory. When the Senate takes up the next coronavirus economic relief bill later this month, I intend to offer an amendment to prohibit sending funds to states that haven’t adopted a statewide mask requirement. https://t.co/DvwiVr02Vo pic.twitter.com/2uqFyNAUL4

Commenting on Feinstein’s lack of a mask, Carlson facetiously claimed she’d been set up by Dulles International, similar to claims made by House Speaker Nancy Pelosi after she visited a San Francisco salon earlier this month in violation of lockdown and face mask orders.

“We can be sure of one thing: this isn’t really Dianne Feinstein’s fault. Just like when the hair salon framed Nancy Pelosi, caught not wearing a mask while getting her hair done, Dulles Airport, the diabolical FBO, probably masterminded the whole thing,” Tucker joked.