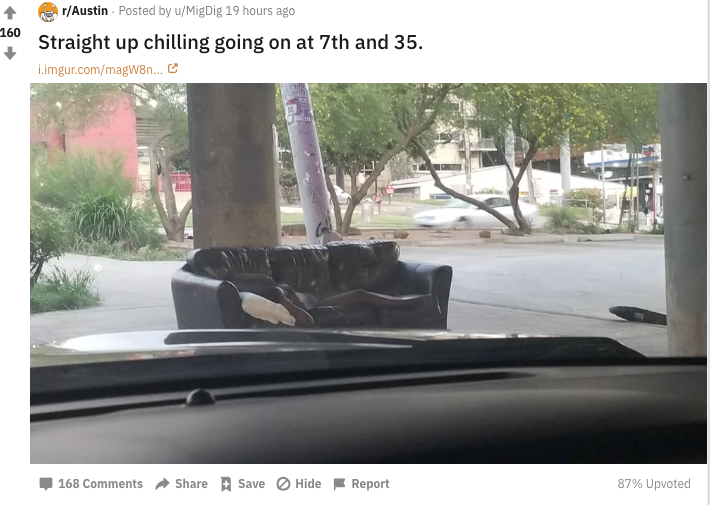 Over the years, Austin has struggled with one of the hardest problems facing modern-day American big cities – an overwhelming homeless crisis of epic proportions.

WOW! This photo was taken at a Discount Tire in #Austin yesterday. Today, it became legal for the #homeless to camp on Austin streets, except at City Hall. #Homelessness

A viewer shared this photo of what appears to be #homeless individuals grilling in the middle of a median near #BenWhiteBoulevard. Early this morning, the #Austin City Council passed changes to ordinances dealing with the homeless population. MORE INFO: https://t.co/UBBuaX6rKN pic.twitter.com/fEHjk9IBDV

As of today it’s now legal to camp, sit or lie down in most public areas/sidewalks in Austin unless a person is putting themselves or others at risk. City is working on list of places where camping will and won’t be allowed with “non-criminal” penalties. @fox7austin #homeless pic.twitter.com/s8ufAKYDWj

DOWNTOWN MATTRESS: we were told a person was sleeping on this mattress at 2nd and San Antonio St. in downtown Austin. The person is gone but the bedding is still there. #austinhomeless @fox7austin pic.twitter.com/W2wDhYcjUX

This means transients are free to camp out on sidewalks, in front of houses and in front of businesses — and police can do little about it.

The new ordinance has led to homeless people camping in places they otherwise would not, to the detriment of Austin residents and tourists.

The new rules didn’t sit well with the Austin Police Association, which has campaigned against changes to the homeless ordinance.

The Austin police union, which has opposed changes to homeless ordinances, shared this pic today. pic.twitter.com/ZNWxNJyz9C

In a Facebook post Monday, the police union posed a hypothetical question, along with its hypothetical answer: “People are sleeping on the sidewalk in front of my residence. This is concerning to my family. Can’t y’all do anything about that?”

“Answer: No, the new obstruction/camping ordinances allow camping on sidewalks, alleyways, and other public places (except parks and City Hall), which includes in front of your house, provided the people camping are not making the sidewalk unreasonably inconvenient or hazardous.” 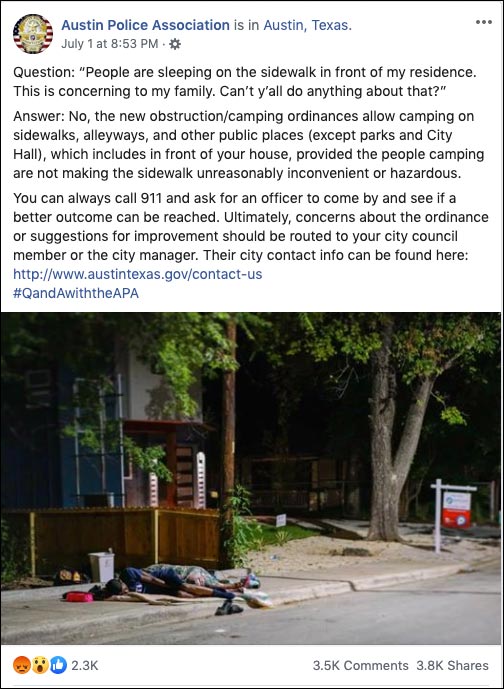 Texas Gov. Greg Abbott has indicated he plans to override the “reckless” city ordinance, after calling out the “insanity” it is creating.

“If Austin— or any other Texas city—permits camping on city streets it will be yet another local ordinance the State of Texas will override,” Abbott tweeted Wednesday.

Look at this insanity caused by Austin’s reckless homeless policy.

All state-imposed solutions are on the table including eliminating local sovereign immunity for damages and injuries like this caused by a city’s homeless policy.

The horror stories are piling up. #txlege https://t.co/WkBryvLKWU

If Austin— or any other Texas city—permits camping on city streets it will be yet another local ordinance the State of Texas will override.

There are far better solutions for the homeless & citizens. https://t.co/xYezoovVCg

President Trump in an interview with Fox News also spoke about the need to shut down “disgraceful” tent cities in Sanctuary cities run by liberals.