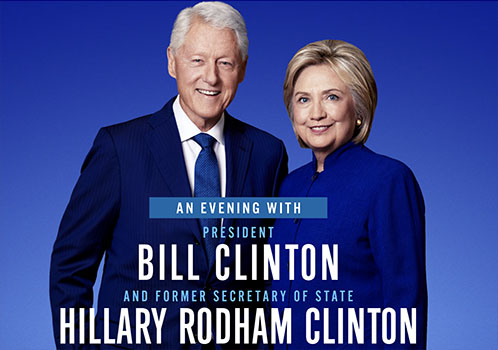 Despite record disapproval among Americans, the Clintons are back and are poised to kick off a national stadium tour just days after the midterm elections.

The globalist power couple will take “An Evening with President Bill Clinton and former Secretary of State Hillary Rodham Clinton” on the road on Nov. 18, nearly two weeks after the midterms.

“From the American presidency to the halls of the Senate and State Department to one of the United States’ most controversial and unpredictable presidential elections, they provide a unique perspective on the past, and remarkable insight into where we go from here,” tour promoter LiveNation announced Monday.

JUST ANNOUNCED: An Evening with President @BillClinton and former Secretary of State @HillaryClinton is coming to a city near you!

The fact the Clintons are readying this national tour highlights their tone-deafness with the current political culture, as even many Democrats have distanced themselves from the “liability” that is the once-influential couple ahead of the midterms.

Even in the height of Clinton’s popularity during the 2016 election race, she still struggled to fill seats, despite being bolstered by basketball star Lebron James and pop singer Katy Perry.

And after her crushing loss to Donald Trump, only crowds of 20 or 30 people came to see Clinton during her promotion tour for the unpopular book What Happened in the toilet paper aisles of Costco.

Meanwhile, President Trump still enjoys packed stadiums, with still many thousands of people watching outside due to overflow of arena capacity.

The making of a @realDonaldTrump rally! Watch 12000+ people enter with a time lapse camera. #maga pic.twitter.com/iqXzBe0v5L

In fact, the crowd sizes of Trump’s recent rally blitzes for the midterms generated headlines themselves.