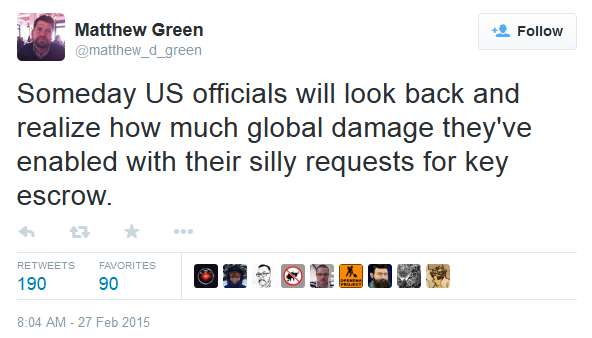 Back in January, we pointed out that just after US and EU law enforcement officials started freaking out about mobile encryption and demanding backdoors, that China was also saying that it wanted to require backdoors for itself in encrypted products. Now, President Obama claims he’s upset about this, saying that he’s spoken directly with China’s President Xi Jinping about it:

In an interview with Reuters, Obama said he was concerned about Beijing’s plans for a far-reaching counterterrorism law that would require technology firms to hand over encryption keys, the passcodes that help protect data, and install security “backdoors” in their systems to give Chinese authorities surveillance access.

This comes right after the US Trade Rep Michael Froman issued a statement criticizing China for doing the same damn thing that the US DOJ is arguing the US should be doing:

U.S. Trade Representative Michael Froman issued a statement on Thursday criticizing the banking rules, saying they “are not about security – they are about protectionism and favoring Chinese companies”.

“The Administration is aggressively working to have China walk back from these troubling regulations,” Froman said.

Those claims would sound a hell of a lot stronger if they weren’t coming immediately after DOJ officials from Attorney General Eric Holder to FBI Director James Comey had more or less argued for the exact same thing.

Just last week, Yahoo’s chief security officer Alex Stamos raised this exact issue with NSA director Admiral Mike Rogers, asking if Rogers thinks it’s appropriate for tech companies to build backdoors for other countries if they build them for the US. Rogers ignored the question, just saying “I think we can work our way through this,” which is not an answer. And now we’re “working our way through this” by having to deal with other countries, such as China, leaping at this opportunity.

And the week before, President Obama himself claimed that he was all for strong encryption, but argued that there were tradeoffs worth discussing, and that some in his administration believed that demanding backdoors made sense to try to stop terrorist attacks. But it’s tough to see how he can claim that it’s okay to entertain those ideas on the one hand, while using the other hand to try to slap China for doing the exact same thing.

As security researcher Matthew Green rightly points out, “someday, US officials will look back and realize how much global damage they’ve enabled with their silly requests for key escrow.” But that day is apparently not today.

The administration keeps bleating on and on about how China is a massive cybersecurity “threat” out there, and then hands the country this massive gift by having a kneejerk reaction to better encryption that protects American citizens.