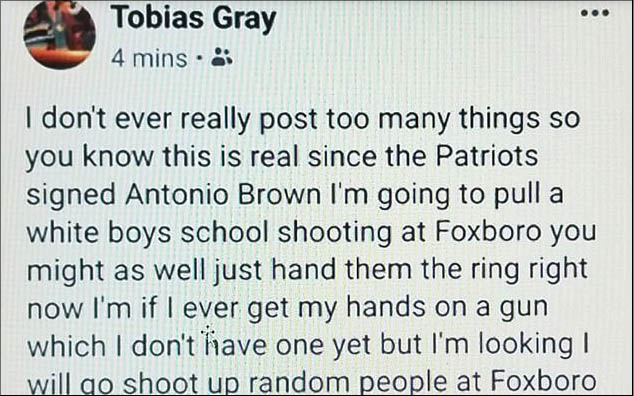 A 44-year-old New York Giants fan from Rhode Island has been arrested after threatening to “shoot up random people” at the New England Patriots’ Foxboro Stadium.

The fan, Tobias Gray, made the threat in a Facebook post where he made it clear that New England’s recent signing of WR Antonio Brown was the catalyst for his rage.

“I don’t ever really post too many things so you know this is real since the Patriots signed Antonio Brown I’m going to pull a white boys school shooting at Foxboro you might as well just hand them the ring right now I’m if I ever get my hands on a gun which I don’t have one yet but I’m looking I will go shoot up random people at Foxboro,” the post read.

He was charged in Massachusetts with making terroristic threats and a fugitive of justice complaint.

Gray even wore a New York Giants jersey during his court appearance on Monday where he was also charged with simple and domestic assault after threatening police officers who came to arrest him following the online threat.

Tobias Gray's lawyer told us he was surprised he was arrested after made a Facebook post about the @Patriots signing Antonio Brown. But Foxboro Police tell us those threats were "terroristic" in nature.

More details coming up live at 5 on @wpri12. pic.twitter.com/9nmItE9c2w

Gray, who has an extensive criminal background, allegedly told an arresting officer, “I will give your kid short-term memory loss. You better watch your back.”

The Wrentham District Court is expected to arraign Gray sometime this week.

CBS Boston covered the story in the following report:


Yet another mass shooting immediately politicized by Beto O’Rourke this time in Odessa and Midland Texas over the weekend with 7 reported dead and 21 injured.

Like an ambulance chaser, if there is a mass shooting in Texas, you can guarantee Beto O’Rourke will be there to grab the national spotlight before all of the information is in and the families have had time to heal.