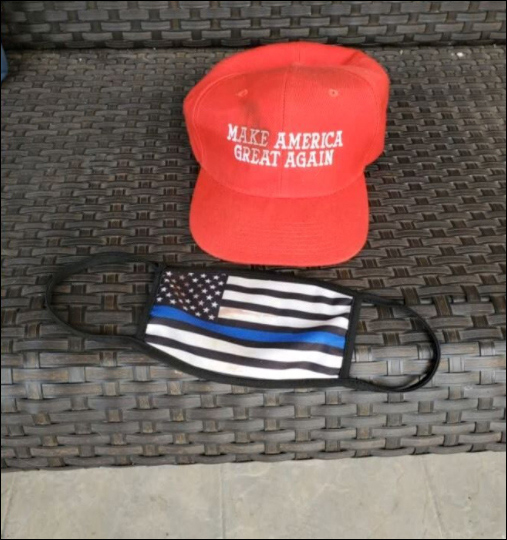 Police in California arrested an anti-Trump leftist for reportedly beating up a 77-year-old military veteran after being triggered over his Make America Great Again hat.

The Vietnam war veteran, who was not identified in reports, said the attack happened in broad daylight while he was visiting his local post office in Red Bluff.

The veteran, who also wore a “Thin Blue Line” pro-police face mask, said a man and a woman approached him and told him they were offended by the hat.

“She looked at me and she goes, ‘We just don’t like people like you,” the man described to local media KRCR.

“Just kind of got shocked a little bit and said, ‘Well, that breaks my heart,’ and no more sooner out of my mouth, I get hit on the left side of my head. ”

After the thug sucker punched the veteran, he continued to pummel him on the ground and proceeded to steal the man’s MAGA hat.

“Then somehow he got me in a headlock and started pounding me on top of my head … I got blood all over the place and I’m trying to figure, you know, where’s my hat, where’s my package?”

The assailant, 26-year-old Daniel Gomez Martinez was later arrested and charged with battery and elder abuse.

The veteran said he feels partly responsible for not utilizing his military training to anticipate the attack.

“I just feel kind of bad, seven years in the military, Vietnam veteran and 30 plus years in law enforcement and you’re always taught situational awareness. And this guy came out of … I never saw it coming.”

“I was so shocked for the hate that people have, you know. I don’t hate them. I never met them. I just can’t believe they would do something like that.”

Tayler Hansen joins Owen to break down how he was assaulted by ANTIFA thugs after they identified him as a conservative.