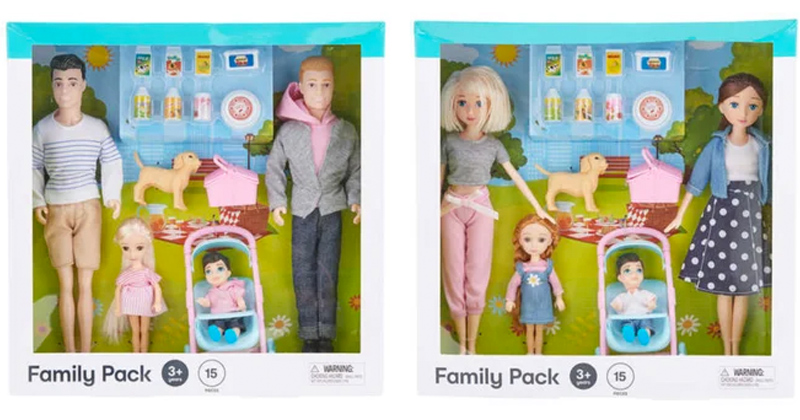 Kmart stores in Australia are selling a line of same-sex family dolls, complete with two children and a pet, oriented toward children as young as three-years-old.

According to Aussie news site 10Daily, the store has released “family playset” dolls for children age 3 years and older, which include two fathers, or two mothers, as well as a young child, a baby, a dog and a picnic set.

The dolls are supposedly “inclusive for same sex couples,” according to 10Daily, which does not explain why children as young as three would be concerned with the dolls’ gender.

The article goes on to quote various adult Facebook commenters who expressed approval of the dolls, under the headline “Kmart Fans Applaud Same-Sex Family Doll Sets.”

However, some “Kmart fans” quoted in the article did not “applaud” or seem excited over the dolls, with some pointing out “Kids don’t notice what [gender] the dolls are,” and another saying “no thanks.”

Another Aussie news site, 7News, laid the LGBT propaganda thick with the headline “Kmart launches same-sex family doll sets and people are absolutely loving them,” however several commenters on the 7News Facebook page pushed back against the dolls, asking if they were really necessary.

Others joked the virtue signal was not woke enough, and asked for fat parent options, or a cat option instead of a dog, driving the point home that the progressive left can never be appeased.

The Star Observer reports Kmart will also select one of three playsets to send to people who order them, since there’s also a heterosexual couple option.

From the Star Observer:

“We cannot guarantee which design you will receive as products are selected at random for online orders,” the Kmart website warns, meaning shoppers don’t get to discriminate in what kind of doll family their child receives.