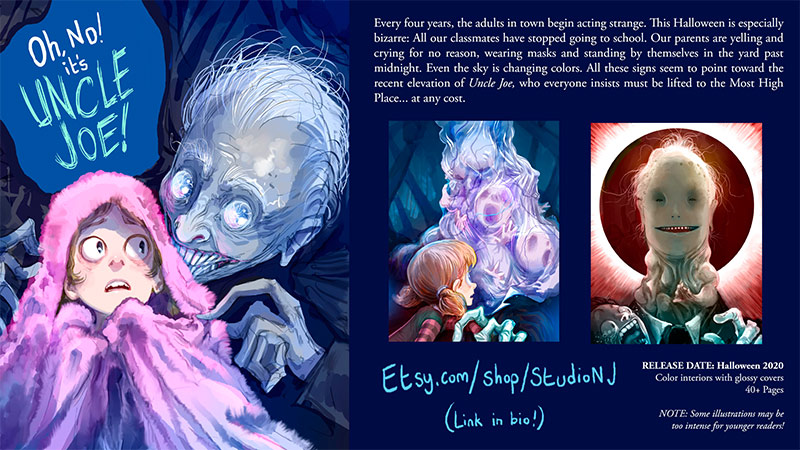 A comic book illustrator is making waves for producing political art portraying 2020 Democrat presidential candidate Joe Biden as a soulless zombie that survives by sucking the life force from children.

The Biden demon will be the centerpiece in artist George Alexopoulos’ upcoming book, “Oh No! It’s Uncle Joe!” set to be released this upcoming Halloween – three days ahead of the US election. 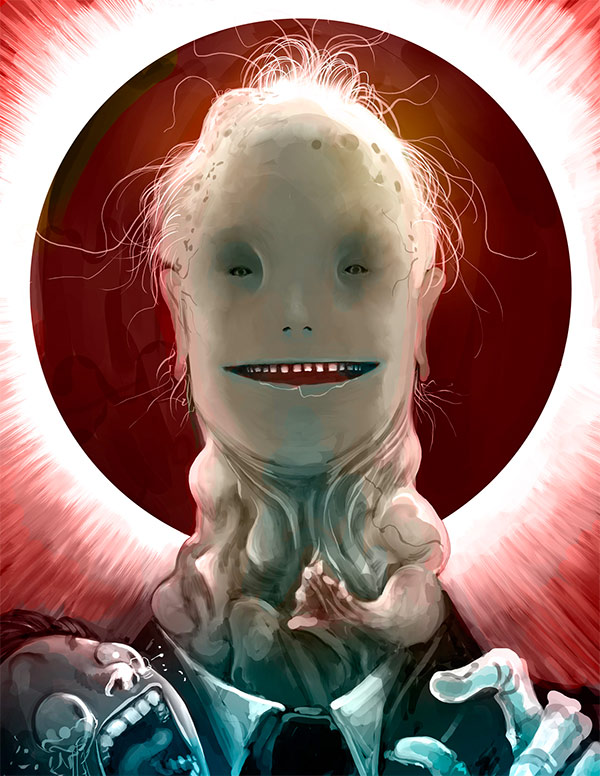 In an exclusive interview with Infowars, Alexopoulos (on Twitter: @GPrime85), explained his motivation behind creating some of the most powerful art of 2020, the inspiration for his creepy Biden book and demon character, and the realization his art had gone from fan fiction to visceral symbolism.

George Alexopoulos: Laughter and horror often go hand in hand. My first Biden joke was written during the Primaries, when I thought “they couldn’t possibly nominate this man.” The only asset Biden seemed to possess was name recognition. Everyone on the internet already knew he displayed bizarre habits like sniffing people, so I thought it’d be silly to draw him eating them, too. Like a monster in a children’s book. 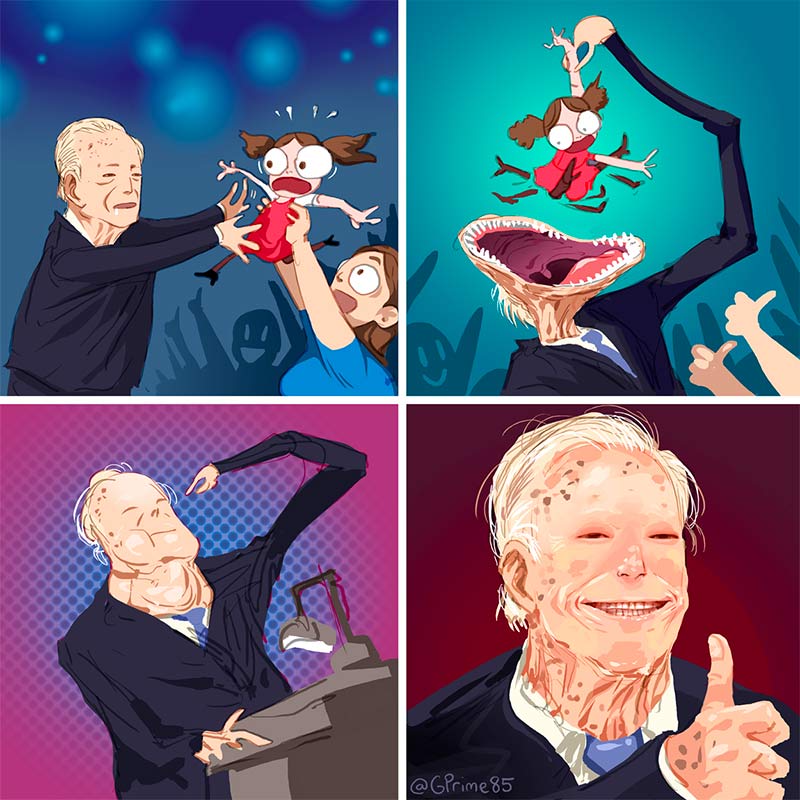 GA: After Biden knocked Sanders out of the primaries I thought, “he’s eating the entire Democrat party.” Lifelong Dems who never would’ve considered supporting him were now doing it against their will. (As we saw with the “vote blue no matter who” hashtag.) So I drew him eating that famous woman wearing a [Bernie] shirt. Unintentionally, my drawings had gone from facetious pokes to visceral symbolism: Biden became the symbol of a beast devouring everything in its path, held tightly from a leash by off-camera handlers. 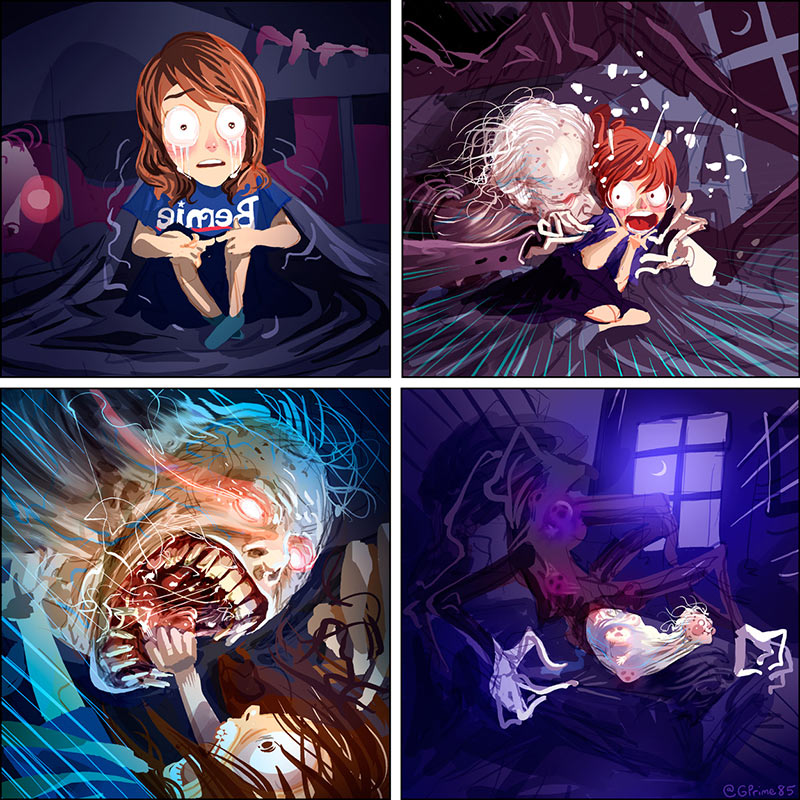 Even worse, Biden’s Alzheimer’s Disease was becoming obvious to anyone who listened to him speak for five minutes without a teleprompter. He became a Lovecraftian creature, driven solely by instinct and hunger – not knowing where he was, or why he was there. He simply “was.” 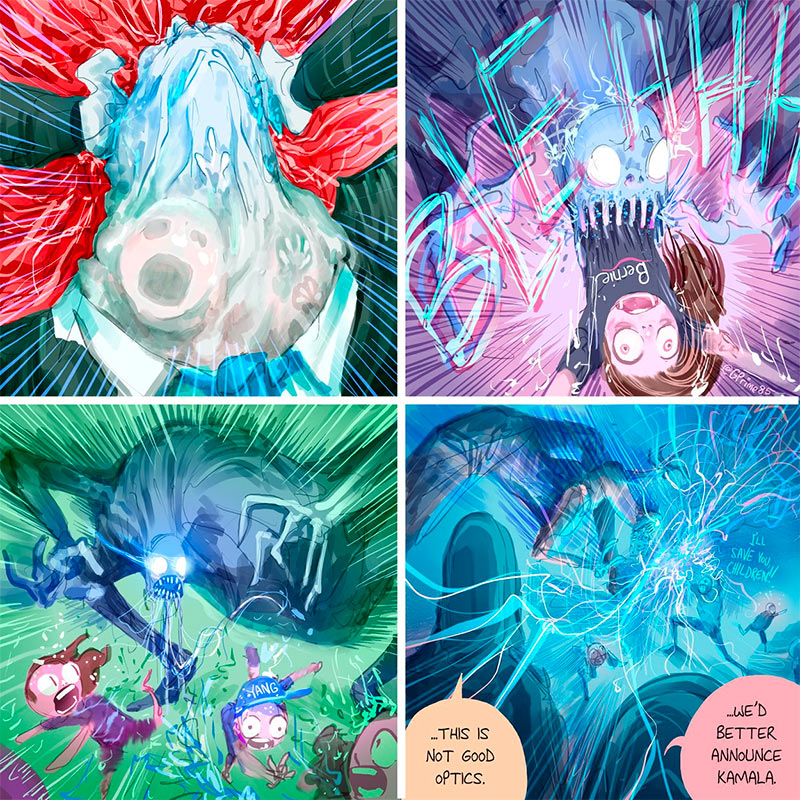 When his VP was announced, the Democrat play was obvious: Biden would retire immediately and hand control to someone else. Kamala, then, is the most obvious Trojan Horse in modern American history (Alexandria Ocasio-Cortez a close second). Realizing this, I drew a comic where Biden doesn’t know what month it is. He announces his retirement prematurely, to the anger and embarrassment of Harris. 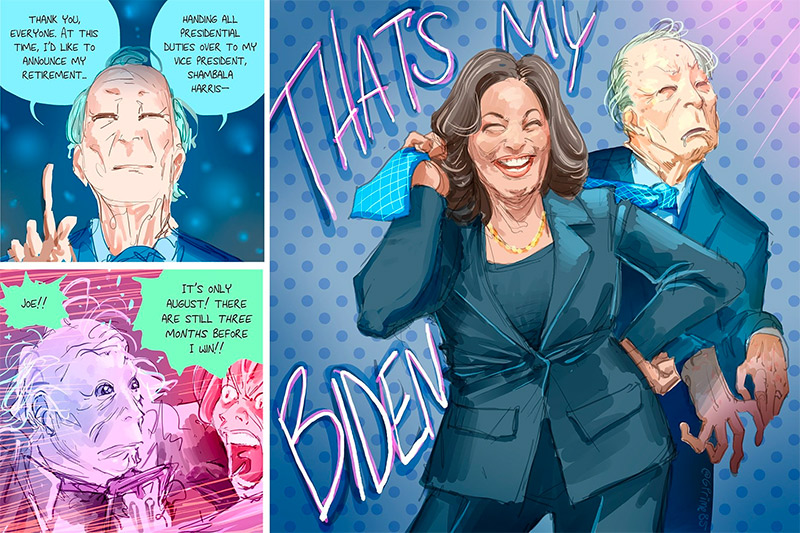 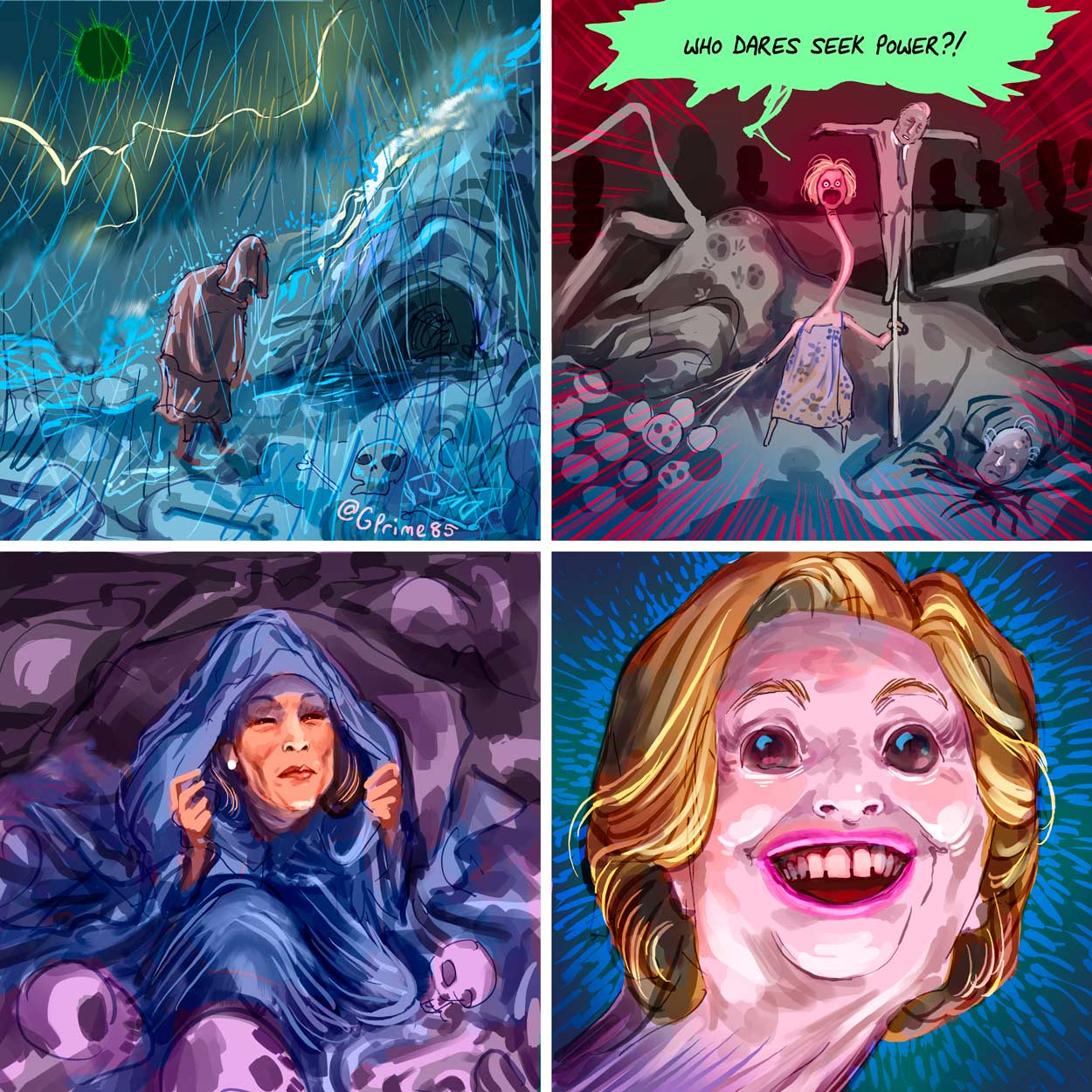 GA: The Democrats had three uninterrupted years since 2016 to propose a better leader than Donald Trump. In a country of over three hundred million people, surely there’s at least one person more capable? Somehow, no: The Democrats spent that entire time kicking and screaming, trying to mock Trump out of the White House. When that failed, they desperately scraped the bottom of the barrel for any excuse to impeach him. Finally in the eleventh hour, like a student who spent all night playing video games but didn’t do their homework, they realized they had no Plan B.

These next three months are going to be delicious. pic.twitter.com/3oN5x4YQJu 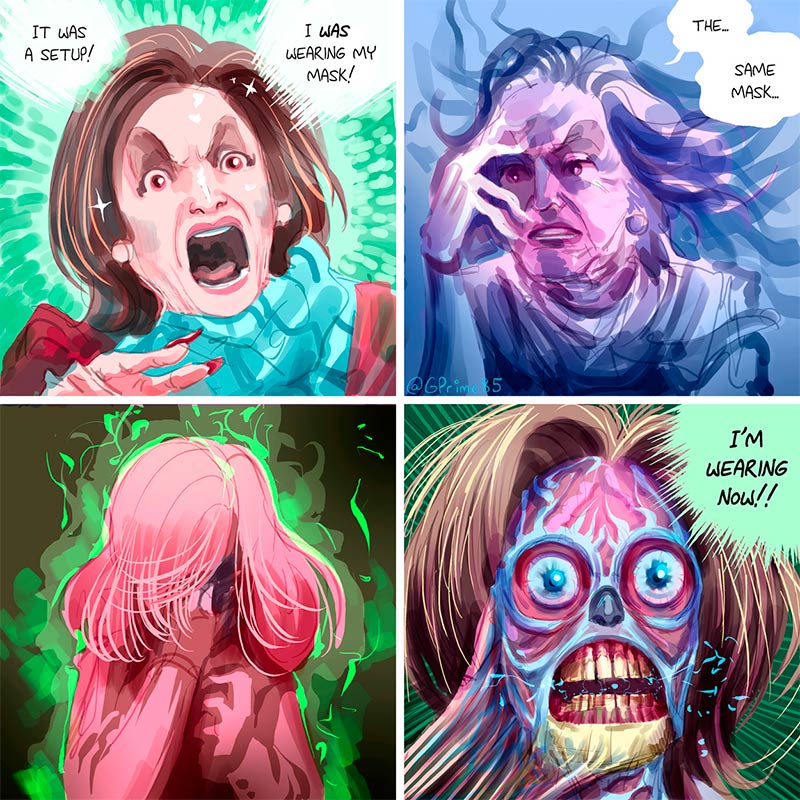 GA: What’s the Democrat strategy now? Throw Biden into the ring with Trump and hope he isn’t embarrassed too badly during the debates? Cry “foul” if Trump is too mean? I wonder if that line has ever worked on an invading army in history: “Knock that off, you’re being jerks!” What the Democrats will put Biden through on September 29th is borderline elder abuse, and it won’t be Trump’s fault. Being made fun of is nothing compared to the real-world horrors and choices the American President has to face every day. Harsh rhetoric are all tests, reflections of what a leader will encounter when negotiating with foreign powers – or worse – enemies.

Alexopoulos’ art distributed mainly via social media stays up-to-date with current events, as evidenced by his most recent four-panel illustration depicting a theoretical debate moderated by podcast host Joe Rogan, a discussion President Trump affirmed he would gladly participate in.

The artist argues President Trump has frequently been unfairly portrayed by the media, despite being clearly competent.

GA: Consider how much criticism, mockery, and abuse Trump has endured these past few years (some of it not undeserved): He’s taken all of it, and even reversed it on his attackers. Like it or not, Trump is a tank. What’s worse for his critics, he’s competent. Trump is as competent as any President I’ve seen in my lifetime. He hasn’t started or extended any wars. The economy, somehow, has remained afloat. Covid has passed with relative ease, with few (if any) interruptions in supply lines even at its worst. As someone who lives near NYC, the area worst hit in the entire country: the simple fact my family could always find groceries is an incredible, if understated, achievement. The worst thing my family endured this whole time was boredom. I’ll gladly take that over panic, hunger, and catastrophic societal failure that my grandparents had to endure in Russia and Greece over half a century ago. Incredibly, Trump didn’t take the bait of turning the 2020 riots into a photo op for leftist extremists by using overwhelming military force. He placed responsibility where it belonged: On the laps of incompetent Democrat leaders like Ted Wheeler, Jenny Durkan, and Lori Lightfoot.

Asked why he mostly steers clear of drawing anti-Trump artwork, Alexopolous says “most jokes about him have already been exhausted.” 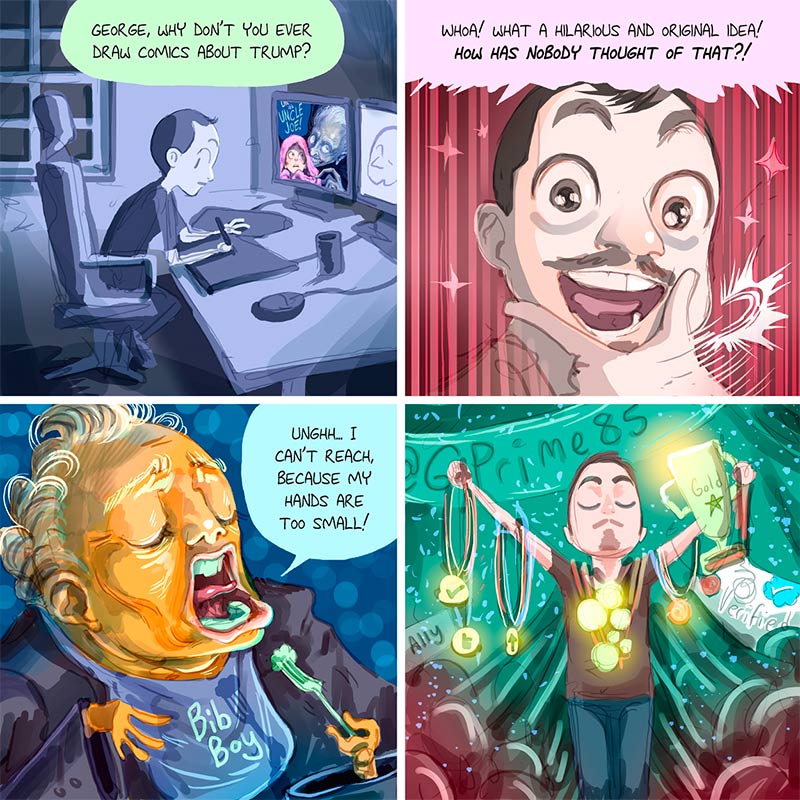 GA: I’m sometimes asked why I don’t make comics about Trump. First, most jokes about him have already been exhausted. The constant, desperate attacks against him have made it boring in 2020. By contrast, I actually don’t enjoy drawing Biden as a monster, though I feel like the only cartoonist doing it. It’s so effective, it almost feels cruel. However, political cartooning is a necessary tradition that goes back to even before the printing press. We citizens are harsh with our leaders because we demand the absolute best leadership. If our elected representatives can’t tolerate simple jabs from our side, how will they deal with the haymakers of foreign powers?

Plus, he adds, Trump has demonstrated he has the energy and stamina to lead the country.

GA: Americans want a fighter in the White House. It makes us feel confident. Very few borderline octogenarians aren’t known to seize the day, nor have the superhuman energy to inspire others to. These elderly are to be pitied, not run through the fiercest political gauntlet our country can legally conceive.

I pity Biden. The morbid circus leading him needs to stop. He shouldn’t have been nominated in the first place, and I’m not even sure Biden has the mental capacity to consent to his appearances anymore. Kamala might as well debate Trump later this month. We all know what the Democrat plan is.

On the subject of whether Trump has his vote in November, Alexopolous says he’ll be monitoring him closely during the debates, the first one of which takes place on Monday, Sept. 28.

GA: Whether or not I vote Trump in November will depend on his demeanor during the upcoming debates. I want to see class and competence. I want to feel optimistic. I wouldn’t mind a laugh or two, either. If I’m unsatisfied, I’ll vote like I always have, and vote myself. Four years ago, I never imagined I’d even consider voting for Donald Trump. I always thought of him as a walking punchline, a real estate mogul with ties to the Tri-State casino industry, up to their necks in corruption and taking advantage of people. The fact I’ll even consider voting for him today with a straight face is a testament not only to his competence, but the incompetence of his opponents. I’ll never vote for a man with Alzheimer’s, nor will I support a party grotesque enough to nominate one.

A stunning three-part series of four-panel comics revolves around Biden’s awkward comments that black people who don’t vote for him “ain’t black.” 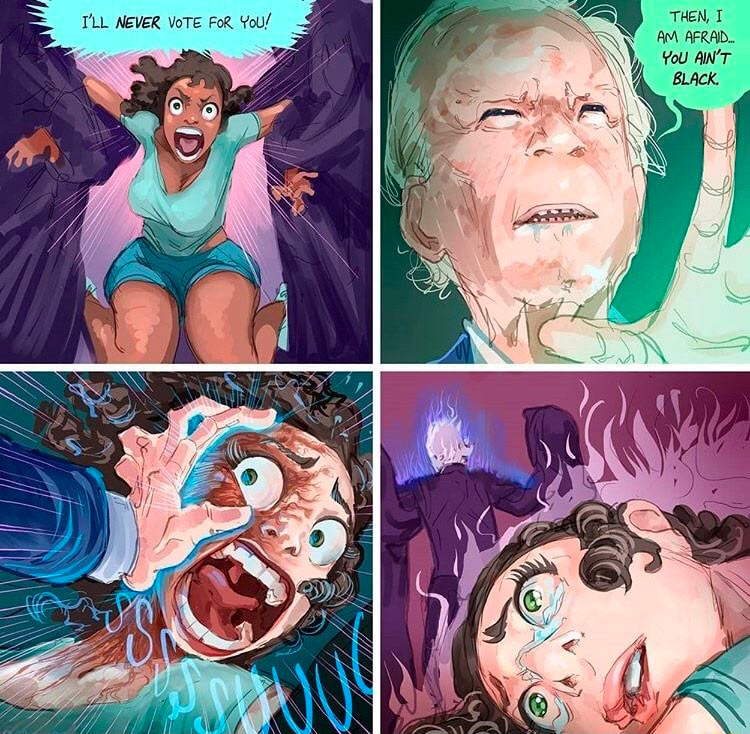 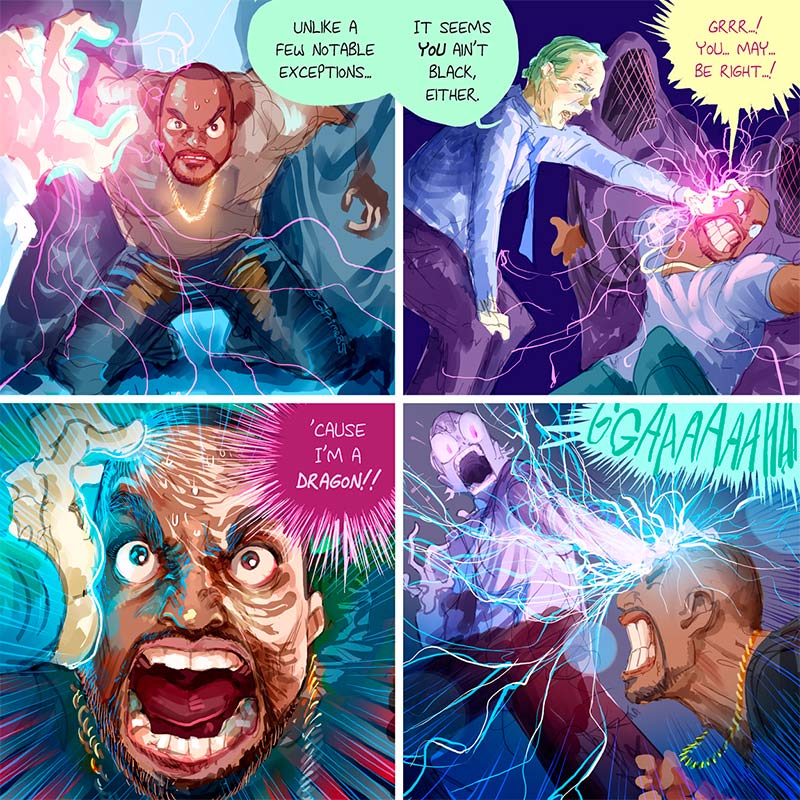 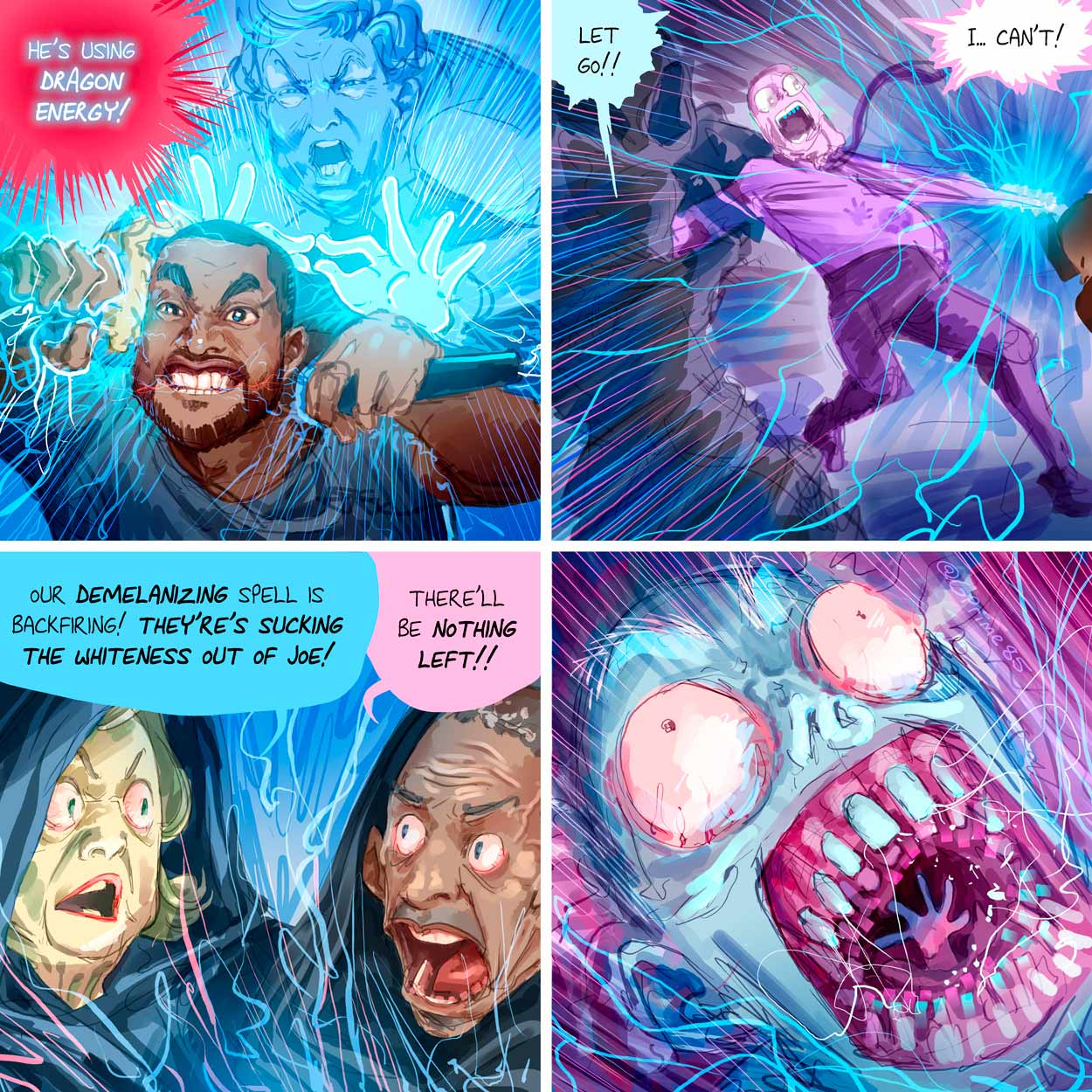 GA: The Democrats have desperately tried blame to everyone but themselves for their failure these past four years, climaxing with the unbelievable rioting, looting, and political violence we’ve seen these past few months. (Or the mostly-peaceful wildfires.) The American Left is pitifully unwilling to admit the obvious: They created their own worst nightmare. They continue to do so, every day, by refusing to look in a mirror.

In one of several commentaries on social issues, Alexopoulos illustrated a comic showing the absurdness of a London Independent editorial complaining about “manspreading joggers” not socially distancing. 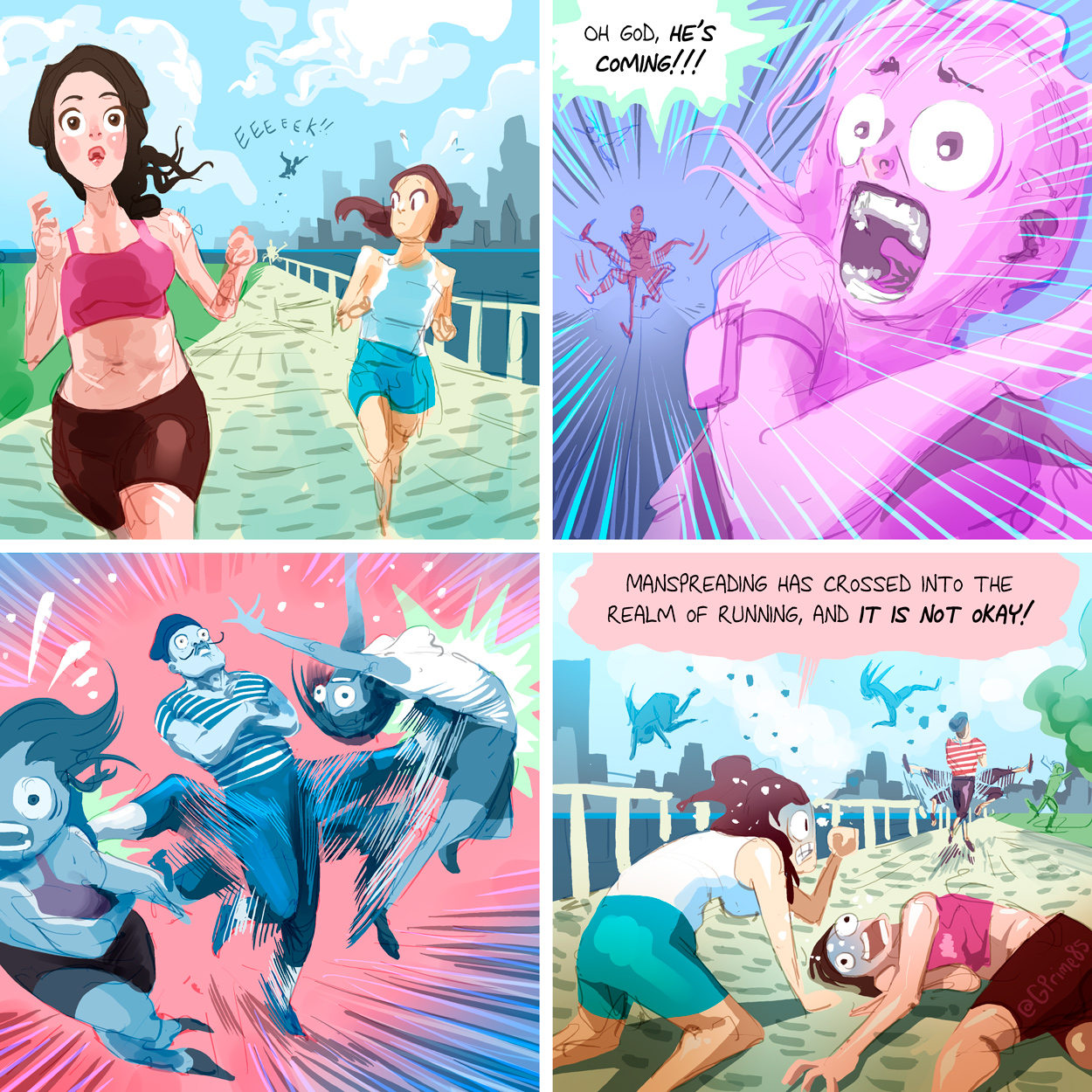 GA: As far as I’m concerned, my minor role in this wretched mosh pit isn’t to draw silly comics. My job as an artist is to render reality as I see it using symbols, pictures, and words. To show others what I see when I look at the world. If my work was merely boring, or my interpretations incorrect, nobody would notice or care about my work. However, that isn’t the case. Many people laugh. They say, “this is so true.” Some viewers hate what I show them. Some have even tried to attack me personally, to ruin my career.

To them, I say the same thing told Reddit in December 2018 before I was brigaded off the platform under false pretenses: You can break every mirror in the world, but you can’t destroy your own reflection.

Say good-bye to Family Guy and The Simpsons as you know it.