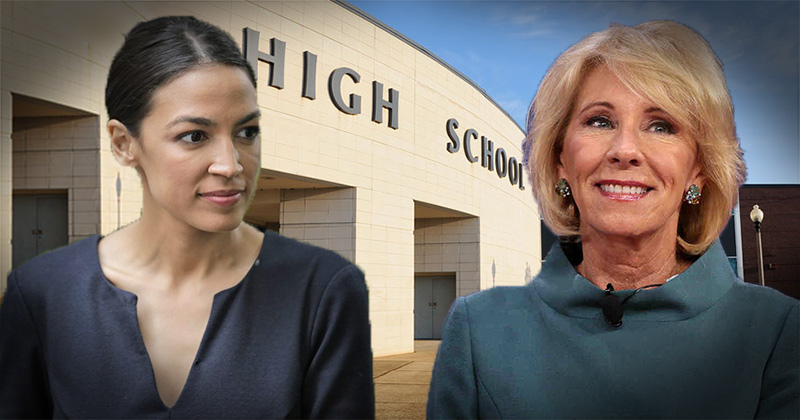 “How nice that AOC claims to have helped her goddaughter get into a public charter school,” she wrote. “It’s a shame she works to deny that opportunity to every other disadvantaged family in America. ‘Good for me, but not for thee,’ indeed.”

How nice that @AOC claims to have helped her goddaughter get into a public charter school. It’s a shame she works to deny that opportunity to every other disadvantaged family in America. “Good for me, but not for thee,” indeed. #EducationFreedomhttps://t.co/a2RhOEeU0o

In a 2017 video, before AOC thrust herself into the public sphere, the then-bartender explained how she got her goddaughter into a charter school in the Bronx.

“This area’s like a lot of where my family is from,” she says while walking down Hunts Point Avenue in the Bronx. “My goddaughter, I got her into a charter school like maybe a block or two down.”

In addition to the 2017 video, an anecdote from AOC’s personal life also makes a strong case for school choice.

Speaking at a Bernie Sanders rally in October of 2019, AOC explained how her family had to make difficult financial sacrifices in order for her to attend a better school.

Living in the Bronx at the time, AOC’s family made the tough decision to buy a house in Westchester county so she could transfer to the superior school district.

“My family made a really hard decision,” she said. “That’s when I got my first taste of a country who allows their kids’ destiny to be determined by the zip code they are born in.”

While AOC’s family was privileged enough to purchase a house in a town where the average household income is $1.2 million, most families cannot afford that and should be able to attend the school that works best for them no matter where it’s located.