Human Rights Watch (HRW) during the height of the Kony 2012 hysteria, dusted off one of its old propaganda videos titled, “Joseph Kony – LRA” uploaded on November of 2010, to try and capitalize on the attention Invisible Children raised earlier this month. However, the Kony 2012 campaign imploded just as fast, and perhaps even more spectacularly than it rose – with vast numbers of people pointing out the untenable narrative it attempted to peddle and the fact that it served as nothing more than a pretext for an expanded US AFRICOM presence in Africa.

Both Human Rights Watch and Invisible Children are funded by Wall Street speculator George Soros through his Open Society Institute and the myriad of corporate-funded foundations it funnels money through. At least one foundation behind Invisible Children (.pdf, page 22), “Enough,” who is also involved in the George Clooney promotion of a US AFRICOM intervention in oil-rich Sudan, actually counts Human Rights Watch a partner. 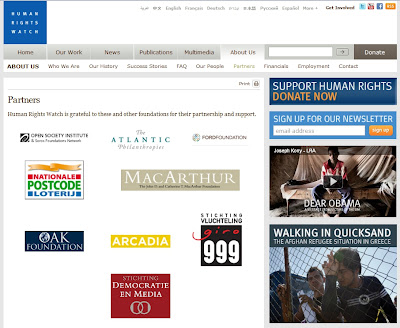 Image: HRW’s partners include Wall Street speculator George Soros’ Open Society Institute which also funds Invisible Children through a myriad of proxy foundations. Note on the right-hand side the “Dear Obama” video which is featured below. It was originally uploaded in 2010, but has just recently been featured on HRW’s website in the midst of the recent Kony 2012 hysteria.

After Invisible Children collapsed under the weight of overexposure – simply the sheer volume of people scrutinizing and exposing the fraud being peddled – we can begin to appreciate the necessity the Wall Street-London elite see in cultivating a vast array of redundant “human rights” fronts. This is to compartmentalize catastrophes like Invisible Children, and just like a ship that loses an entire section to flooding, it can be sealed off and the agenda kept afloat. In this case, the AFRICOM agenda can still keep moving forward even with “all hands lost” at Invisible Children.

HRW video has Africans “begging” for AFRICOM to carry out its mission.

Video: HRW’s video features “Africans” operating under the false perception that the US President is a global arbiter. These “Africans” are also suspiciously eager for the US to intervene in their respective nations and “bring security” – which just so happens to be AFRICOM’s stated objective.

Examining the mission statement of US Africa Command (AFRICOM), as provided on their official website we see:

1. A safe, secure, and stable Africa is in our national interest.

2. Over the long run, it will be Africans who will best be able to address African security challenges and that AFRICOM most effectively advances U.S. security interests through focused security engagement with our African partners.

Upon watching the HRW propaganda video we see “Africans” addressing President Obama regarding atrocities being committed by Joseph Kony’s Lord’s Resistance Army (LRA). As they plea for help, they claim the indigenous people are powerless and incapable of stopping “the war,” and that Africans “want” Obama to intervene. One character conveniently wearing an Obama medallion literally says, “with tears in our eyes, we ask the President to end this terrible suffering and bring security to our region.”

“Bring security to our region,” indeed – which of course just so happens to be AFRICOM’s stated mission objective. When we consider that Kony was last believed to be in the Congo and hasn’t been seen in 6 years (4 years when HRW uploaded this video in 2010) and that the war in Uganda against the LRA has long since ended, it is clear that HRW, like Invisible Children, is grossly mischaracterizing the alleged plight in the region to serve as a pretext for AFRICOM expansion.

Like Invisible Children, Human Rights Watch is a corporate-backed fraud.

Just like the Kony 2012 fraud and Invisible Children, Human Rights Watch merely leverages legitimate concerns regarding human rights to carry out the neo-imperial ambitions of their corporate sponsors. HRW claims that they have “gathered evidence at massacre sites,” but seem to have overlooked the very real and quite extensive abuses and atrocities committed by Ugandan President Yoweri Museveni. In fact, while Kony has been MIA for years, Museveni is currently carrying out mass displacements affecting tens of thousands of Ugandans as he auctions off their land to British and American corporations.

That HRW and Invisible Children ignore this inconvenient truth, as well as propose supporting, funding, and further arming Museveni who has undemocratically reigned over Uganda for nearly 30 years while selling out his nation, exposes the true mission of US AFRICOM. It is the continued pillaging of Africa started by European Empires during the “scramble for Africa.” 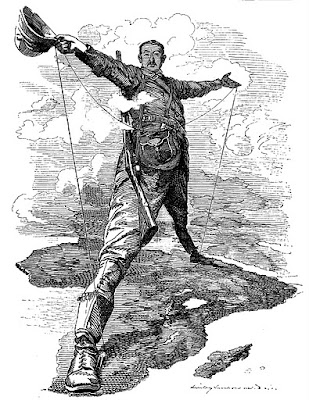 Image: Cecil Rhodes whose British South Africa Company (BSAC) (1889-1965) helped conquer a commanding swath of the African continent in the name of the British Empire. His megalomania was “honored” by the British later naming an entire nation after him, “Rhodesia,” now modern-day Zimbabwe.
…. 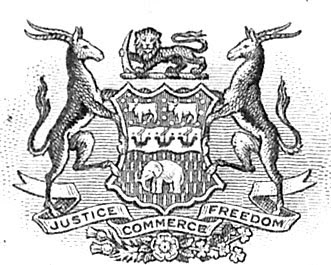 Image: The coat of arms of the British South Africa Company (BSAC) (1889-1965) – a predecessor of modern neo-imperialism. The BSAC was chartered by the British Empire and lent its resources and capabilities to help loot the natural wealth of Africa. This mirrors exactly AFRICOM and the legion of corporate-backed NGOs carrying out the modern-day looting of Africa. Note the terms “justice” and “freedom” used upon the company’s coat of arms. Humanitarian concerns have long been used to mask wide scale human exploitation. The term “commerce” is also present in both the coat of arms pictured above and in the intents of AFRICOM Vice Admiral Robert T. Moeller openly declaring AFRICOM’s guiding principle as “protecting the free flow of natural resources from Africa to the global market.”

Video: “Colonialism in 10 Minutes: The Scramble For Africa” explains why Africa is the way it is and that the “scramble” is still very much ongoing today. AFRICOM, Kony 2012, and HRW are just the latest tricks and perpetrators of what can easily be described as the rape of a continent.

When we look at the history of Africa and the genesis of the current strife being manipulated and used as a pretext for continued Western intervention, we will realize that it was the West that created many of these problems in the first place. It then stands to reason that the West’s return in the form of Wall Street-funded “humanitarian NGOs” and US AFRICOM are the least likely solutions to improving the long-plighted continent.