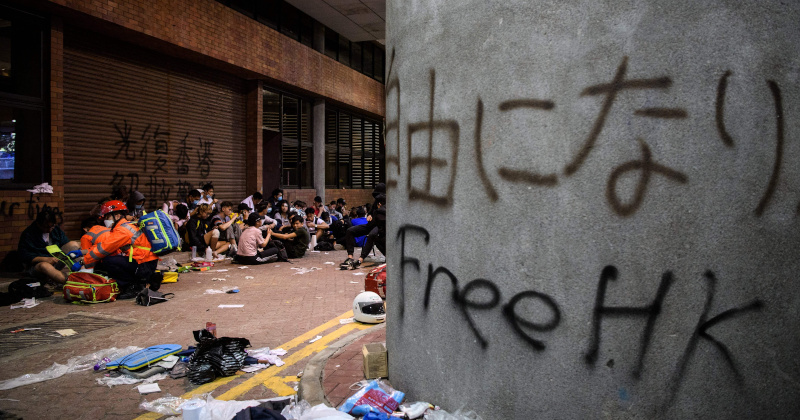 The siege has witnessed the most intense violence since anti-government demonstrations escalated more than five months ago.

Hong Kong leader Carrie Lam said Tuesday that an estimated 100 protesters remain trapped inside the city’s Polytechnic University for the third consecutive day of the siege by police.

Police have surrounded the university in the center of the bustling Kowloon peninsula and are arresting anyone who leaves.

Lam said 600 protesters had left the campus, including 200 who are under 18 years old, adding that those under 18 would not be arrested immediately but could face charges later. The other 400 who left have already been arrested.

“We will use whatever means to continue to persuade and arrange for these remaining protesters to leave the campus as soon as possible so that this whole operation could end in a peaceful manner,” Lam said after a meeting with her advisers.

She warned campus protesters must surrender if there was to be a peaceful resolution.

“This objective could only be achieved with the full cooperation of the protesters, including of course the rioters that they have to stop violence, give up the weapons and come out peacefully and take the instructions from the police,” she told a press conference in her first comments on the standoff.

The new phase of the protests has led to chaos throughout Asia’s financial hub, with schools closed, train lines disrupted and major roads blocked by barricades. Police say they have arrested around 1,100 people in the last 24 hours for charges including rioting and possessing an offensive weapon.

Social unrest has caused havoc across the city for more than five months.

Demonstrators said supplies, including food, were quickly running out at the campus.

“There have been so many people who have sacrificed for this,” said one 21-year-old university student who had escaped from the campus on Tuesday.

Dozens of mask-wearing protesters were seen escaping the university on Monday night by sliding down plastic hosing from a bridge and fleeing on waiting motorbikes as police fired.

Two officials were permitted to enter the campus late on Monday in an attempt to mediate, but many protesters refused to leave voluntarily.

Whole pavements have been torn up to build these extensive road blocks in Tsim Sha Tsui. Tear gas visible in the background. A few metres away, a Starbucks is completely gutted. #HongKong pic.twitter.com/2DC2A0AKj3

According to Chinese state media outlet Xinhua, Beijing insisted on Tuesday that only China had the authority to rule on constitutional matters in Hong Kong. It condemned the Hong Kong High Court decision to veto the ban on face masks during public demonstrations.

“No other institution has the right to make judgments or decisions,” said Chinese parliament spokesperson Zang Tiewei.

The Hong Kong High Court had ruled Monday that the mask ban enacted over a month ago by Lam was unconstitutional.

US Secretary of State Mike Pompeo said Monday that the US was “gravely concerned” about the protests and that the main responsibility for restoring peace rested with the government in Hong Kong.

The human rights office of the United Nations called for authorities to de-escalate the humanitarian situation, “which is clearly deteriorating,” for those holed up inside the university. Food supplies inside are said to be dwindling. The office added that protester violence was “deeply regrettable and cannot be condoned.”

Larry Nichols joins The Alex Jones Show to break down the corrupt establishment’s intentions to crush the will of the people.