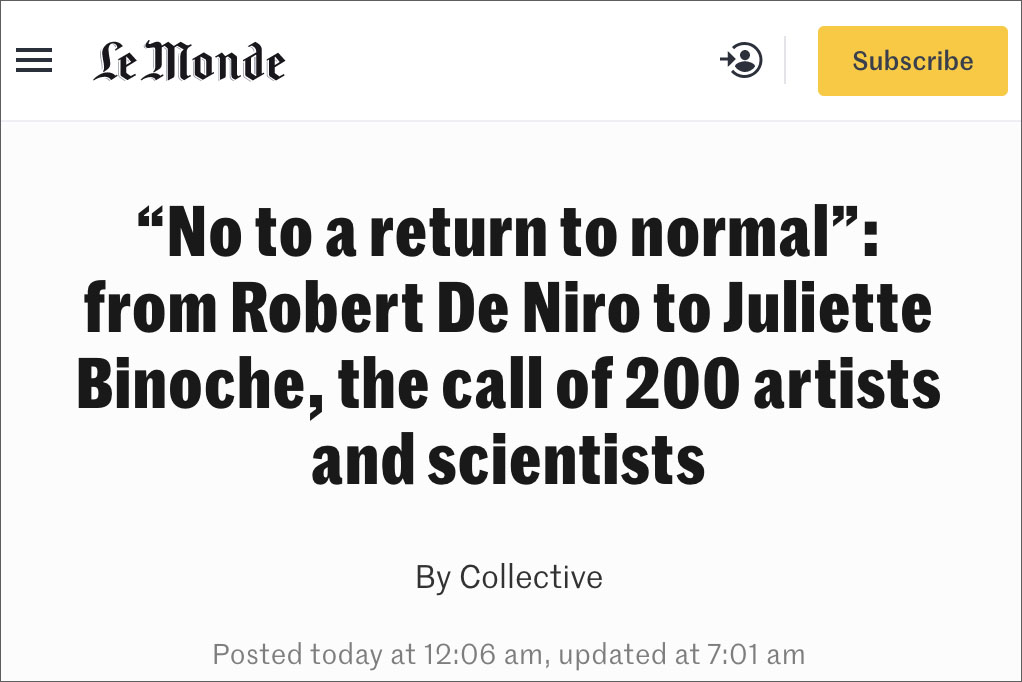 Over 200 Hollywood celebrities and scientists published an editorial on French newspaper Le Monde on Wednesday demanding that society accept a new “radical transformation” of America brought on by the coronavirus pandemic.

Among the celebrities were the usual far-left activists like Robert De Niro, Madonna, Barbra Streisand, and Jane Fonda, along with singers, directors, and Nobel Prize-winning elitists, using the coronavirus crisis to spout their usual climate change talking points.

“The ongoing ecological catastrophe is a meta-crisis: the massive extinction of life on Earth is no longer in doubt, and all indicators point to a direct existential threat. Unlike a pandemic, however severe, a global ecological collapse will have immeasurable consequences,” the statement said.

“The pursuit of consumerism and an obsession with productivity have led us to deny the value of life itself: that of plants, that of animals, and that of a great number of human beings. Pollution, climate change, and the destruction of our remaining natural zones have brought the world to a breaking point.”

“The radical transformation we need – at all levels – demands boldness and courage. It will not happen without a massive and determined commitment. We must act now. It is as much a matter of survival as one of dignity and coherence,” the statement concluded.

As Joe Saunders of The Western Journal noted, the virtue-signaling Hollywood elites frequently push the left’s socialist agenda no matter what crisis is taking place.

“Whether it’s preaching about open borders from behind gated properties or attacking the right of self-defense while being protected by armed guards, the leftists of the entertainment world rarely pass up an opportunity to signal their superiority to the masses below them,” he wrote.

Are the celebrities giving away their wealth ?
Will we all live in mansions?

For anyone slightly aware of the actual truth behind the Chinese SARS devastation. Hollywood has revealed themselves as they truly are. Arrogant misinformed spoiled a#$holes who would rather support a foreign power that is responsible for sending the United States over a cliff than support the efforts of their own Republic.