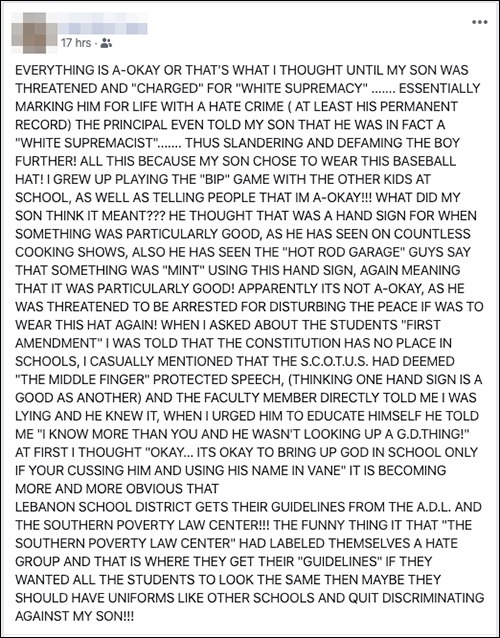 A student at a high school in Missouri was accused of promoting white supremacy due to a baseball cap sold by Infowars, which features the OK hand gesture.

Parents of the Lebanon High School student say their son had his hat confiscated after administrators claimed it displayed a hate symbol.

“So yesterday I got a text from my son saying that his hat was confiscated due to the fact that it means white supremacy,” the boy’s mother wrote on Facebook, alongside an image of the hat sold at Infowarsstore.com for $14.95.

The student’s mother claimed she was unable to obtain documentation of the offense due to a delay in an update to the school server, but upon visiting the school to retrieve the hat, the boy’s father says a principal there referred to his son as a white supremacist.

“The principal even told my son that he was in fact a ‘White supremacist,’” the boy’s father described in a separate Facebook post, claiming the school was “Thus slandering and defaming the boy further! All this because my son chose to wear this baseball hat!”

According to the father, the boy thought the gesture meant that something was good.

Furthermore, the father claims school officials threatened to have his son “arrested for disturbing the peace” if he brought the hat back to school.

When asked whether his son’s rights were protected under the First Amendment, he says he was told “the constitution has no place in schools.”

“It is becoming more and more obvious that *** school district gets their guidelines from the A.D.L. And the southern poverty law center!!!” the father wrote.

While school dress code does prohibit wearing hats “inside the school building at anytime,” the student’s alleged offense does not seem to meet any of the state’s hate crime criteria.

Missouri statutes describe a hate crime as one “which the state believes to be knowingly motivated because of race, color, religion, national origin, sex, sexual orientation or disability of the victim or victims.”

The school did not respond to Infowars’ request for comment as of writing.

The Anti-Defamation League in September of last year designated the Okay hand gesture as a hate symbol, after months of trolling from the website 4chan which tricked the media into believing it was a White Power symbol.

The baseball cap is marketed by Infowars as the “It’s Ok to be Ok politically incorrect” designer hat and is intended to challenge the liberal hysteria over the common and popular hand gesture.

Former president Obama has been pictured flashing the “white supremacist” OK hand gesture that a Cub’s fan was banned for flashing recently. Alex exposes how this overreaction to symbols is being used by the globalists to control the population.