A group headed by a former congressional candidate is offering private dinners exclusively to white women, where they are lectured about how racist and supremacist they are, even if they don’t realise it.

The organisation, co-founded by self described ‘racial justice activist’ Saira Rao, has called itself ‘Race To Dinner’, and claims to provide a way for women to alleviate their white guilt.

The group’s website explains that white diners are able to “bear witness” to the pain of “Black and Brown” women, while noting that the event is not actually for them because “you and your dudes wrote the book,” on white supremacy.

The organisation states that “as a white person in America, you are an active participant in upholding white supremacy,” even if you actively denounce racism.

In other words, it’s not OK to be white.

“Black and Brown” people are “on the receiving end of white supremacy” while white women “are on the giving end.” the diatribe continues.

The website is replete with statements about how white women need to be made to feel uncomfortable and how ‘the truth’ must be heard. 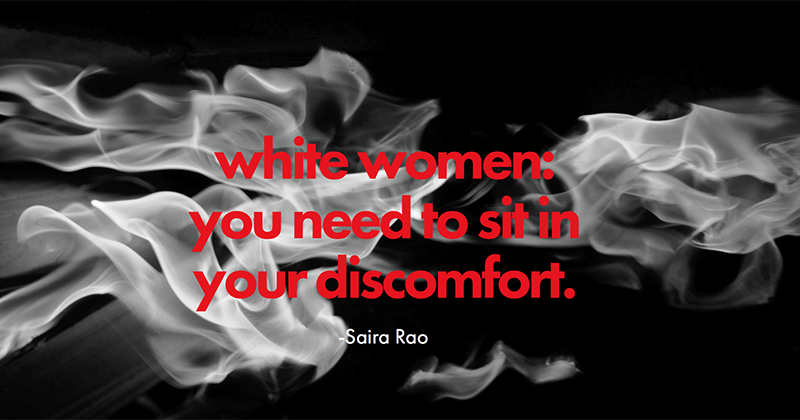 The group also has a Facebook page which claims that “white women cause harm every single day.”

The organisation even asks white women to “smash your white fragility” and “set aside your white woman tears,” by hosting the events. 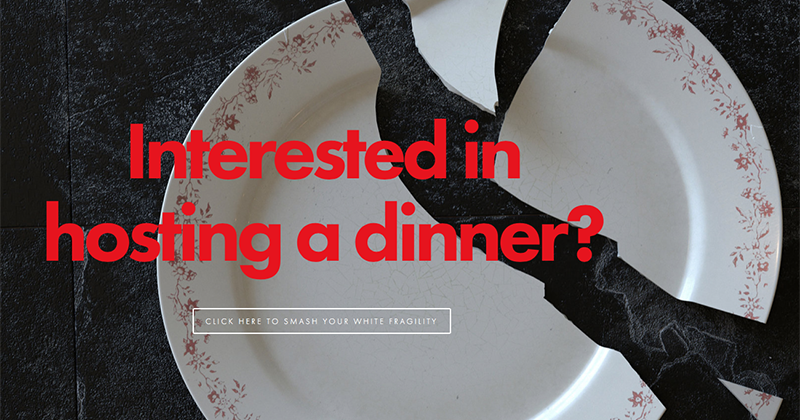 “White women hosts and attendees are there for one reason and one reason only: TO BEAR WITNESS TO OUR PAIN.” The intent is to “reveal the naked truth about RACISM in America and YOUR COMPLICITY as white women,” the site notes.

“Our goal is to dig out the tumor called white privilege, power, control and reveal it for what it is, as an even more sinister and toxic form of RACISM. You are an integral part of this system. It is time for you to own that.” it continues. 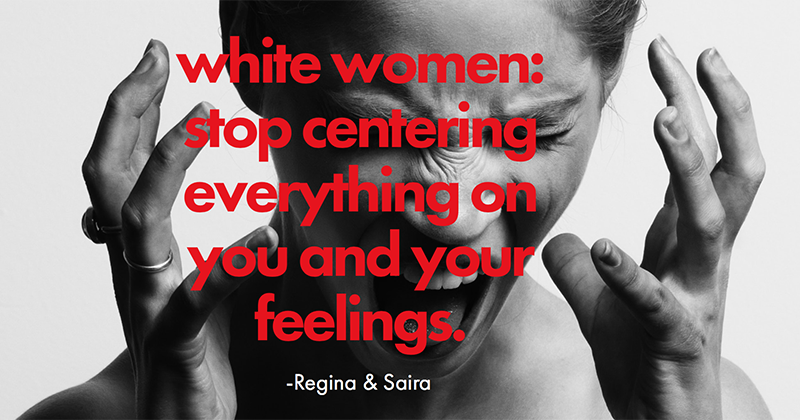 Co-founder Rao lost a primary in Denver, Colorado during the last election run. At the time, she vowed to “give up on white people”.

Short and long answer: YES.
Should I Give Up on White People? https://t.co/MD0JDNgFNx

She claims these statements led to death threats, not just from ‘Trump’s people’, but also from ‘white Democrats’.

Race to Dinner has received stinging backlash on social media:

This sounds like fun. Go to dinner and apologize for being white.

"The dinner will be painful, uncomfortable, maddening, and upsetting."
That's fine. But no peanuts, please. I'm allergic. https://t.co/onOxGMNmmg

I seriously don't know how I feel about Race2Dinner when a phrase promoting it says "White women stop your crying." This statement implies white women aren't discriminated against or don't suffer. Shouldn't it B Women2Dinner. A chance 2 share OUR stories. https://t.co/Kpjeqti8Qh

This sounds like just about the worst dinner anyone could ever go to but…. what's cooking? I'll sit through anything for ziti.https://t.co/iqXdTmFVCo

Race To Dinner. WTAFunk?? Hoping this is a spoof, fearing it’s not. What utter nonsense and stupidity. https://t.co/ZFZo6UhoJD

This service allows white women to hire women of color to come to dinner so the white women can "bear witness to our pain, the pain you [the women who invited the WoC to dinner] have caused." "Race2Dinner" nicely sums up contemporary upscale progressivism.https://t.co/rcNdSAKpA8 pic.twitter.com/qU8HBhPgPO

Well looking at your tweets you say many racist things against white people. So you're talking about yourself here.

And also this beyond idiotic thing.https://t.co/COUMTthYd6