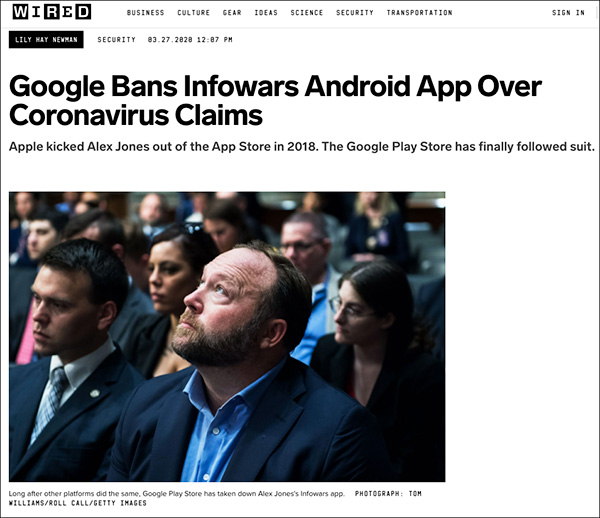 Google’s decision to ban the Infowars app is yet another brazen attack on free speech and the First Amendment by anti-American Big Tech firms that are exploiting the COVID-19 crisis as a smokescreen for their continued efforts to censor dissenting voices. Every American should be outraged by Google’s actions, and should remember that Infowars has long been the canary in the coal mine when it comes to political censorship. Americans do not want mega corporations like Google to decide what they can and cannot think, say, or do. Today’s ban is a clear preview of what is to come: total internet censorship for those who dare to question the mainstream narrative.

Watch Alex Jones break this down on the Friday edition of the Alex Jones Show:

ON FRIDAY, GOOGLE removed the Infowars Android app from its Play Store, extinguishing one of the last mainstream strongholds of infamous conspiracy theorist Alex Jones. The takedown on the heels of a video, posted in the Infowars app last week and viewed by WIRED, in which Jones disputed the need for social distancing, shelter in place, and quarantine efforts meant to slow the spread of the novel coronavirus.

Google confirmed to WIRED that it removed the app on Friday. The app had more than 100,000 downloads according to Google Play’s published metrics, and was rated “E10+,” meaning safe for all users 10 and older. The Infowars app sold products like supplements and protein powder, broadcast The Alex Jones Show live, and posted videos and articles from Jones and others.

“Now more than ever, combating misinformation on the Play Store is a top priority for the team,” a Google spokesperson told WIRED. “When we find apps that violate Play policy by distributing misleading or harmful information, we remove them from the store.”

According to Wired, Jones in a video last week made remarks claiming, “everybody dies under the new world order except maybe one tenth of one percent that believe they’re going to merge with machines and have made deals with this inter-dimensional thing that gave them all the technology. … You can’t make a deal with these aliens, OK, that the Bible tells you about and ever get off the planet.”

“Elsewhere in the video, Jones claims that natural anti-virals exist to treat the novel coronavirus,” reports Wired, without citing or linking to the actual video.

I ordered Alex Jones to immediately stop selling & marketing products as a treatment or cure for #coronavirus on his website.

If he doesn’t cease & desist these activities immediately, I won’t hesitate to take legal action & hold him accountable for the harm he’s caused.

While other unofficial Alex Jones apps are still available at the Google Play store, Infowars confirmed the Infowars Official app was unavailable as of writing.

Google Play Store users had rated the Infowars official app 5 stars, and it was one of the last places to download the Infowars Official app on Android, after several big tech giants simultaneously decided to remove Infowars on August 6, 2018.

But after being blacklisted from most Big Tech sites, including the Apple App Store (where it overtook CNN in terms of downloads), Twitter and YouTube, Infowars spread out to other independent social media platforms, such as Gab, Minds and Bitchute, and launched its own successful video platform at Banned.video.

Alex Jones breaks down the recent decision by Google to ban another Alex Jones app from their Play store for exposing the dems blocking coronavirus treatments, ushering in the era of digital book burning.