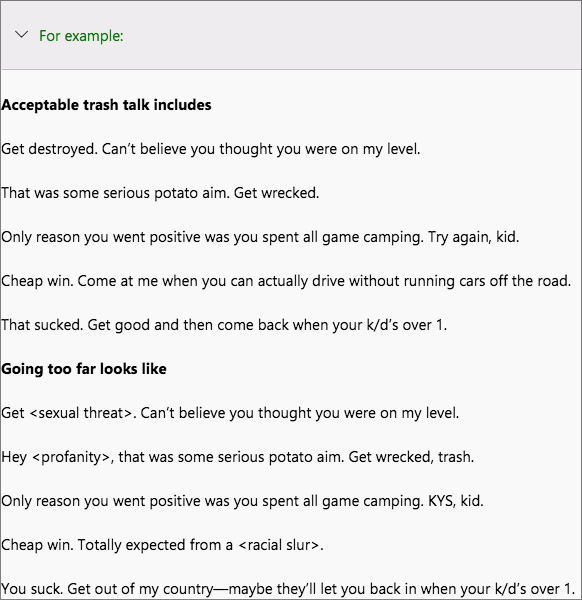 Microsoft’s new community standards for Xbox Live lay out a guideline for how to properly trash talk without being “offensive” or “hateful” to other players.

If a player sends a message deemed “harassing” they could have their entire account suspended, and several offenses will definitely get you banned.

According to the standards, when a user is permanently suspended they are forced to “forfeit all licenses for games and other content, Gold membership time, and Microsoft account balances.”

Sexual threats, profanity aimed at others and racism are three vague topics Xbox will be looking for.

Even “Flooding voice chat with music during a multiplayer match” can get you in trouble under the new rules.

Redditors on the subreddit r/xboxone brought the new guidelines to light, and their reaction was largely negative.

Xbox does provide examples of language that will get you banned as well as examples of trash talk that are deemed acceptable.

“Man the examples of acceptable/unacceptable trash talk are gold,” said the top comment on the Reddit thread.

In another section, the new standards explain how being “overly edgy” or trying to “get a rise” out of people is no longer tolerated.

In an age of increased sensitivity and college safe spaces, who’s to say what’s too “edgy” and what happens when a snowflake claims someone is trying to “get a rise” even if they’re not?

The following screenshot shows more vague content or actions that could get you flagged, such as making “provocative religious comments” and promoting “controversial politics.” 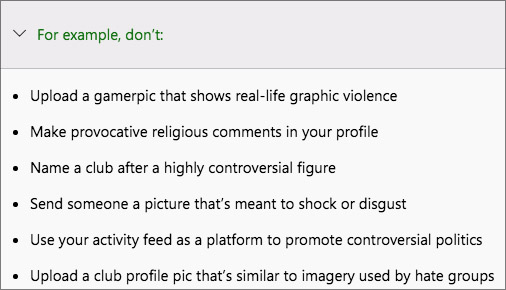 And don’t think you can trick the keen eyes at Xbox who will find out if you use “double entendres” or “an inappropriate play on words” in your profile.

A segment titled, “They’ll See What You Did There,” explains that “if your content is designed to trick others into thinking they’re reading or seeing something inappropriate, we’ll have to treat it that way.”

A Microsoft spokesperson told Motherboard, “The standards are not a new set of rules, but are a call to action that empowers every player to evaluate their behavior and adjust accordingly in order to be a force for good.”