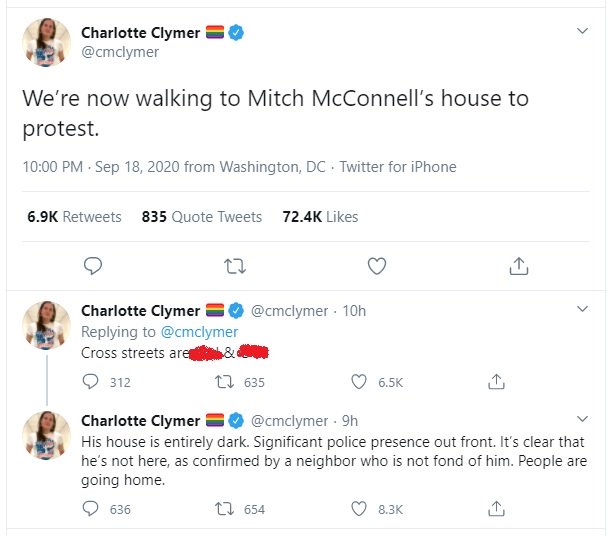 Just hours after Ginsburg’s death was announced, leftists quickly doxxed McConnell, who has the power to bring a vote on the Senate floor for President Trump’s Supreme Court nominee, and mobilized their fanatics to protest outside his Kentucky home.

The woman is being transported to jail. pic.twitter.com/xwQtGnXdU0

Dozens of demonstrators were seen gathered outside of McConnell’s home with signs like “Ruth sent us.”

McConnell announced on Friday that the Senate would hold a vote for President Trump’s SCOTUS nominee, which Trump has indicated he will quickly name.

Wow, so many Seattle liberals must be disgusted to see these protesters showing up to Mitch McConnell’s house, after they spent all summer condemning the local protests at the homes of public servants. 😮 pic.twitter.com/2hfKGAIkXE

“Americans reelected our majority in 2016 and expanded it in 2018 because we pledged to work with President Trump and support his agenda, particularly his outstanding appointments to the federal judiciary. Once again, we will keep our promise,” McConnell said.

“President Trump’s nominee will receive a vote on the floor of the United States Senate,” McConnell added.

This isn’t the first time the left targeted McConnell’s home.

Last year, leftists surrounded his house at night chanting for him to be “stabbed in the motherf*cking heart” for his pro-Second Amendment views, resulting in Twitter suspending his account for posting videos of the incident.