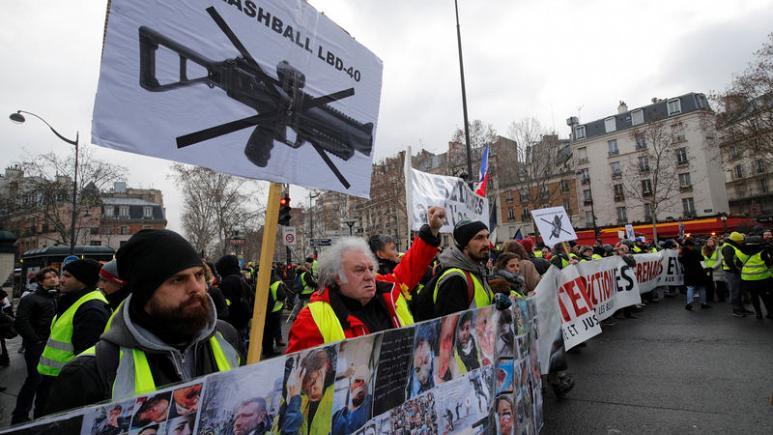 One week after a Yellow Vest organizer was “handicapped for life” by French police, protesters dedicated Saturday’s demonstrations to denouncing police violence – only to be beaten and gassed by said police.

There have been 1,900 protesters and around 1,000 police injured since the movement began in November, and 10 fatalities, including an 80-year-old Marseille woman who was killed when a police tear-gas canister was launched into her apartment window while she was trying to close the shutters. She was taken to a nearby hospital but died during an operation after suffering shock, according to a local media report.

More French police throwing down, beating, batoning, and abusing their own people.

Police used several weapons against the activists on Saturday, including rubber bullets and Flash Ball weapons. The French Interior Ministry said that 80,000 security officials had been deployed across France, including 5,000 in Paris.

In Valance in the south of France, the mayor said measures had been taken to prepare for about 10,000 demonstrators. Authorities fear up to 1,000 of those could be violent rioters. –Daily Mail

Protesters in Paris began chanting “Macron Resign” Saturday morning as they threw bottles and other projectiles at police, resulting in the deployment of tear gas.

Alex Jones reveals the globalists’ master plan and the ultimate long, con-game they play on humanity. The question is, are humans across planet Earth going to stand up and fight back against it?

“We want him out, but we also want the police to stop wounding us with their Flash Ball weapons,” said 33-year-old Yellow Vest Jacques Caron. 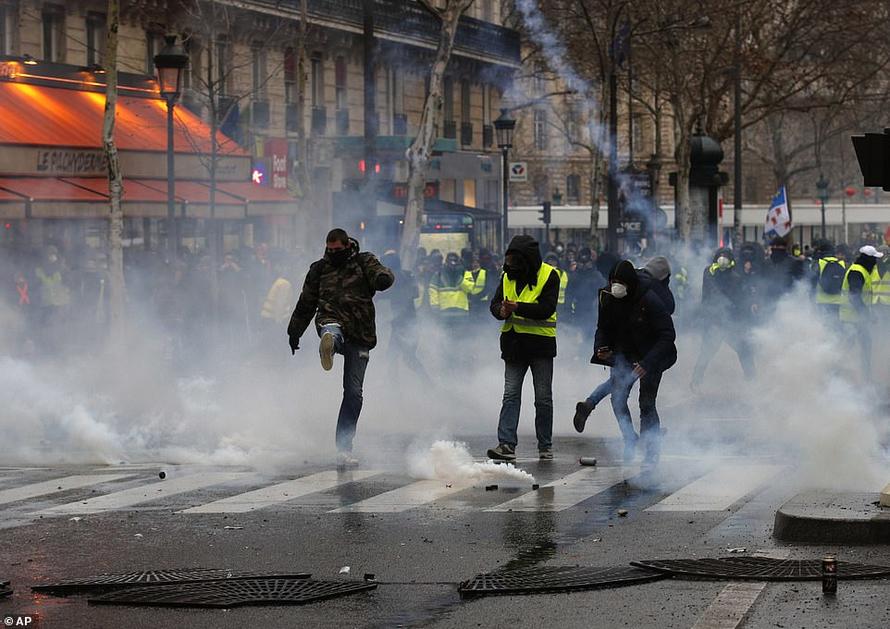 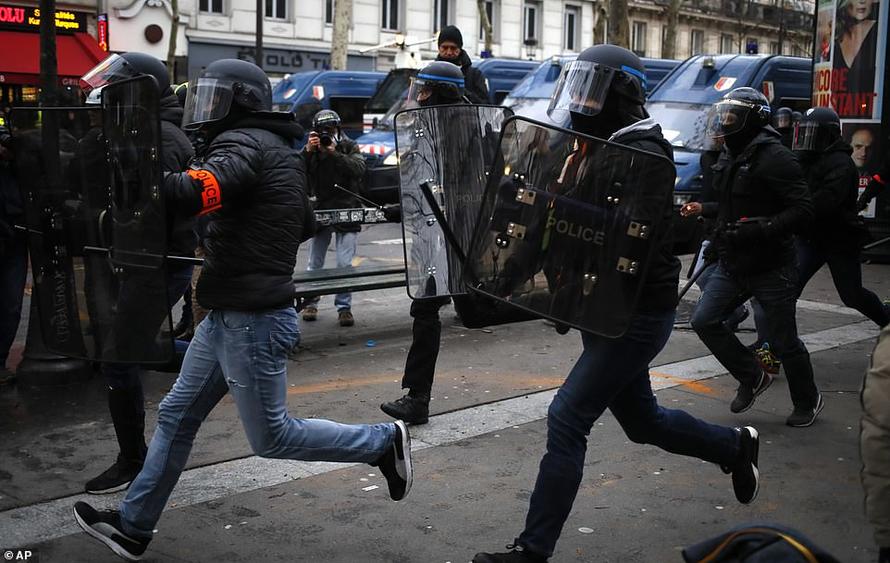 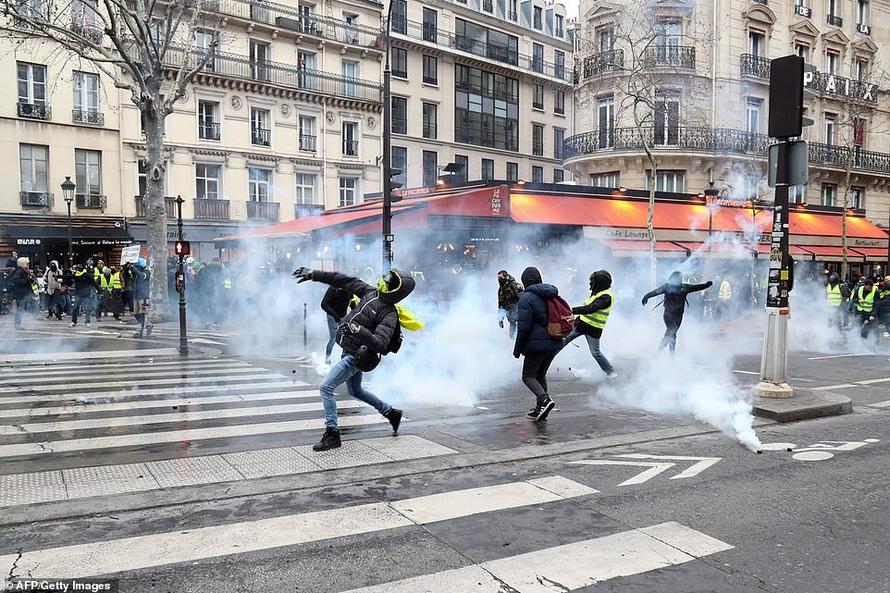 Yellow Vest organizer Jerome Rodrigues, 40, was “handicapped for life” last weekend after being struck with a projectile fired by police, which his attorney said was a flashball. Rodrigues addressed a Paris crowd on Saturday before the day’s protests. 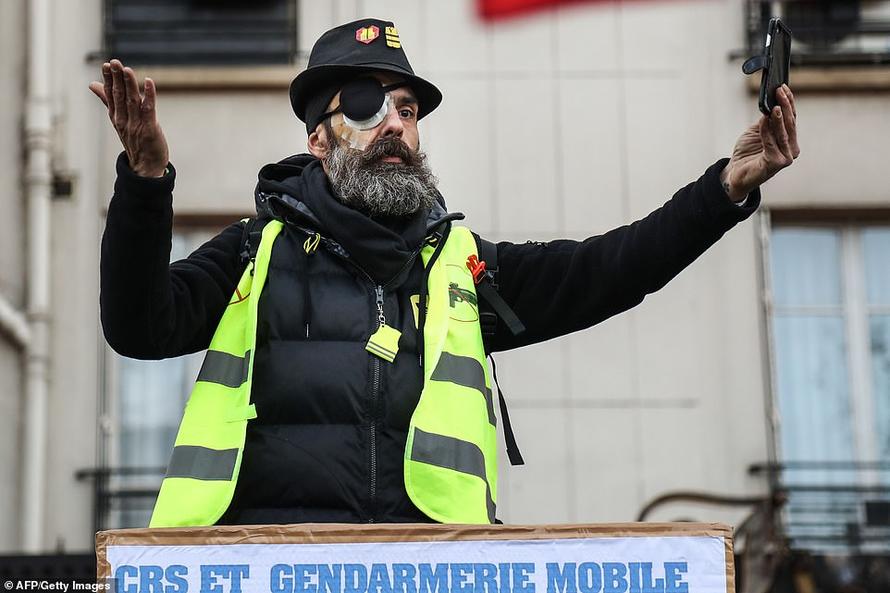 Like others who have been mutilated in recent months, he said he was hit by a so-called Flash Ball – rubber projectiles fired from police guns.

A bid to have them outlawed failed last week, and numerous officers were seen carrying them today.

Dramatic video of the Rodrigues incident led to other Yellow Vests calling for a ‘mass uprising’ against the Macron administration.

In turn, police suggest that a non-lethal grenade exploded in front of Mr Rodrigues, and he was hit by shrapnel. –Daily Mail 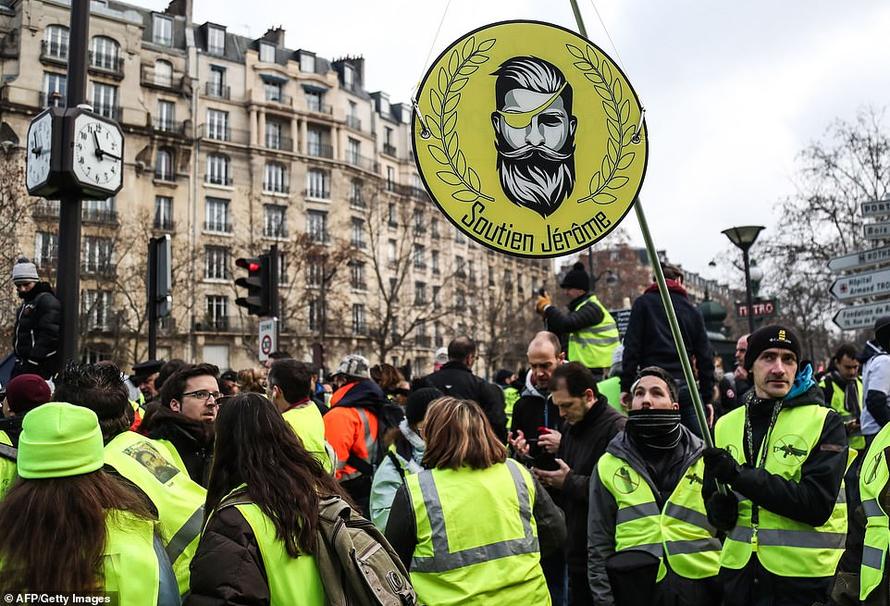 Earlier in the week Rodrigues said that he had received messages of support from several French police officers. “The police have orders but I know there are men behind the armour,” Rodrigues told RT. He was placed in an artificial coma following the incident at the Bastille monument last Saturday. 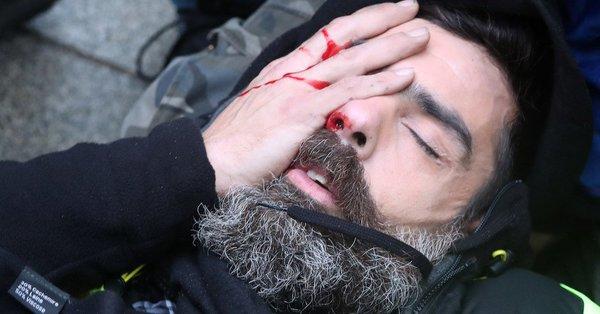 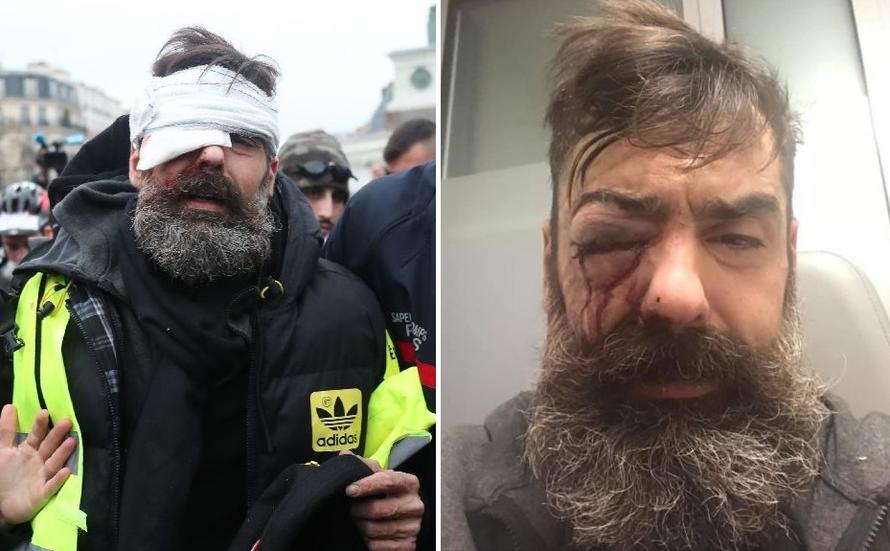 Yellow Vest organizer Eric Drouet, meanwhile, said that French police had “aimed at the head,” telling BFM-TV that it was a “homicide attempt.”

“When we aim at the head, we try to kill. How should this weapon be used? We must not aim our head.”

Drouet says that Rodrigues incident justifies “a mass uprising without precedent by all useful and necessary means.”

On Friday, France’s top administrative court ruled that police could continue to use rubber bullets blamed for dozens of injuries during the protests. 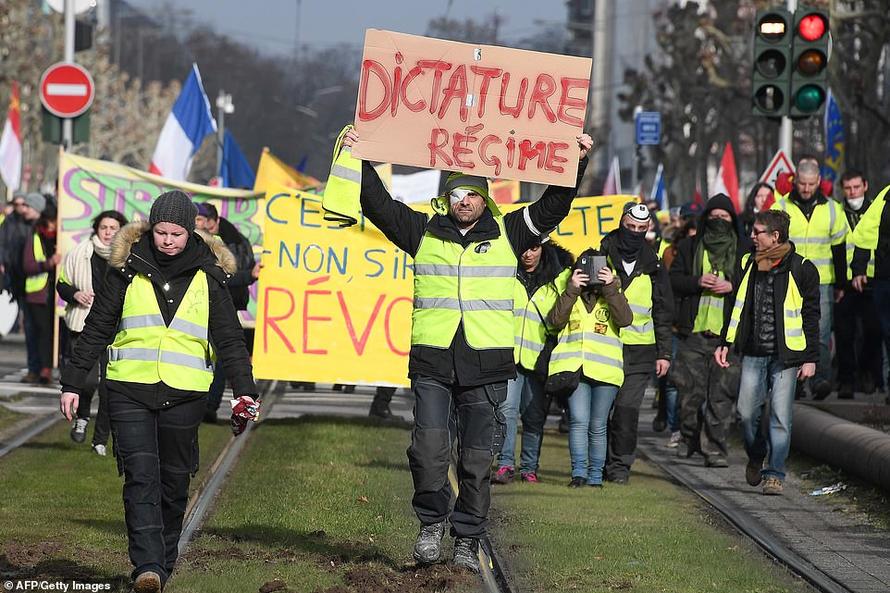 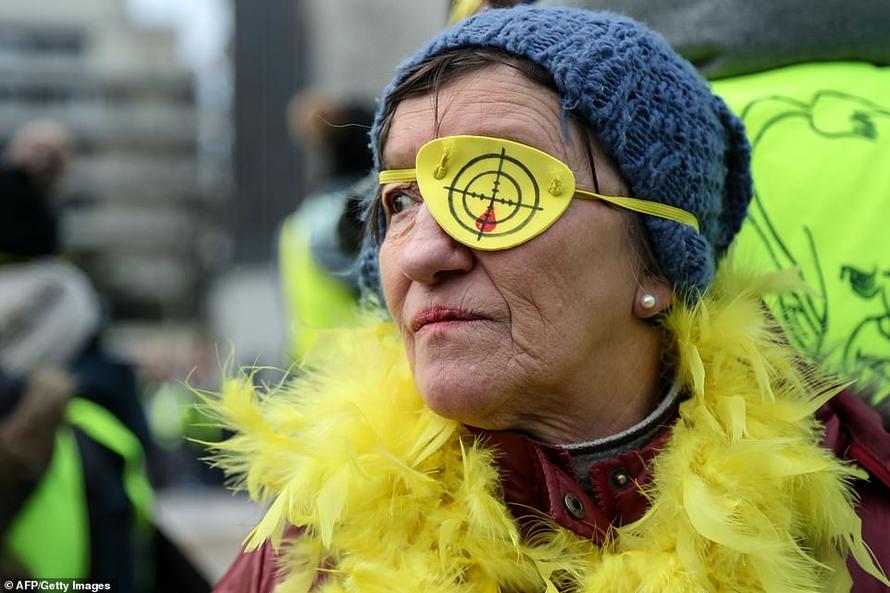 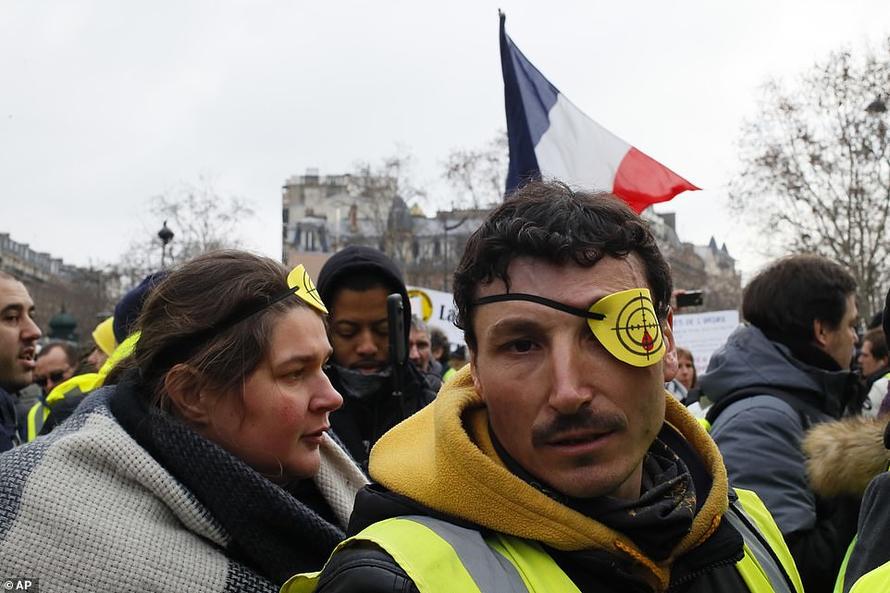 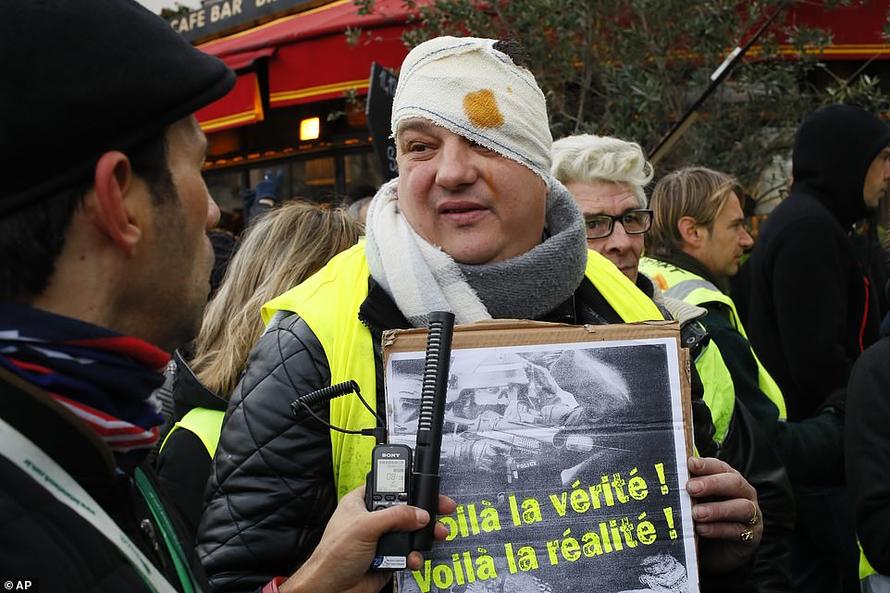 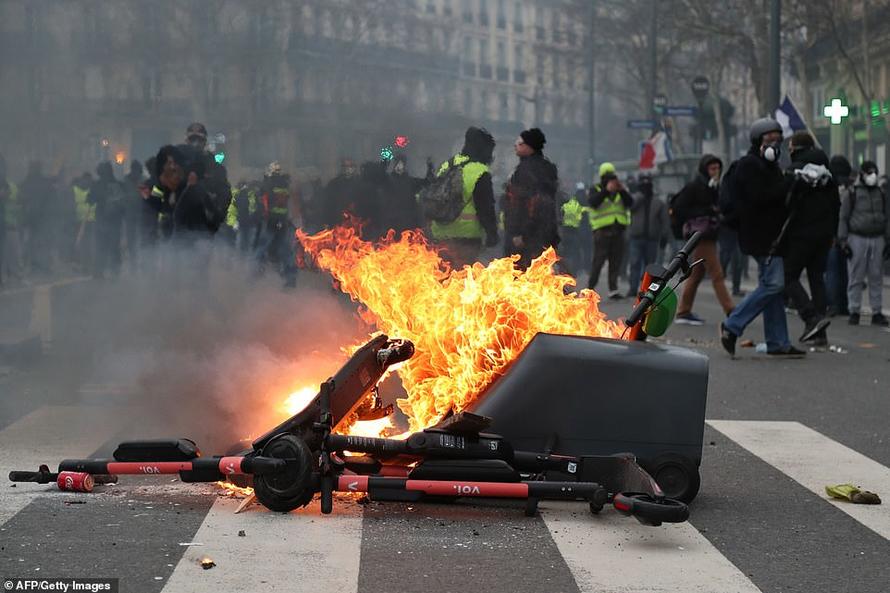 The French Council of State justified the use of police force due to the threat of violence which has accompanied the protests.

“Contrary to what the applicants claimed, the organisation of operations to maintain order during the recent demonstrations did not indicate any intention by the authorities not to respect the strict rules governing the use’ of such ‘less-lethal weapons,” said the court, which added that the use of specialized “defense ball launchers” (LBDs) “is particularly appropriate for responding to these types of situations, as long as the rules governing their use are respected.”

Protesters have been joined by extremists from the far Right and the ultra-Left, as well as anarchists intent on causing as much damage as possible.

The independent Mr Macron, leader of the Republic On The Move party, won the French presidential election in a landslide in 2017, but he is now dubbed the ‘President of the Rich’ with polls showing his popularity rating struggling to get above 30 per cent.

Today’s ugly scenes are typical of ugly scenes that have regularly reduced Paris and other towns and cities around Paris to a war zone. –Daily Mail

“These less-lethal weapons are essential, they allow us to keep protesters and rioters at a distance, or to approach them for arrest without having to use weapons that can kill,” said junior Interior Minister Laurent Nunez in an interview with RTL Radio. 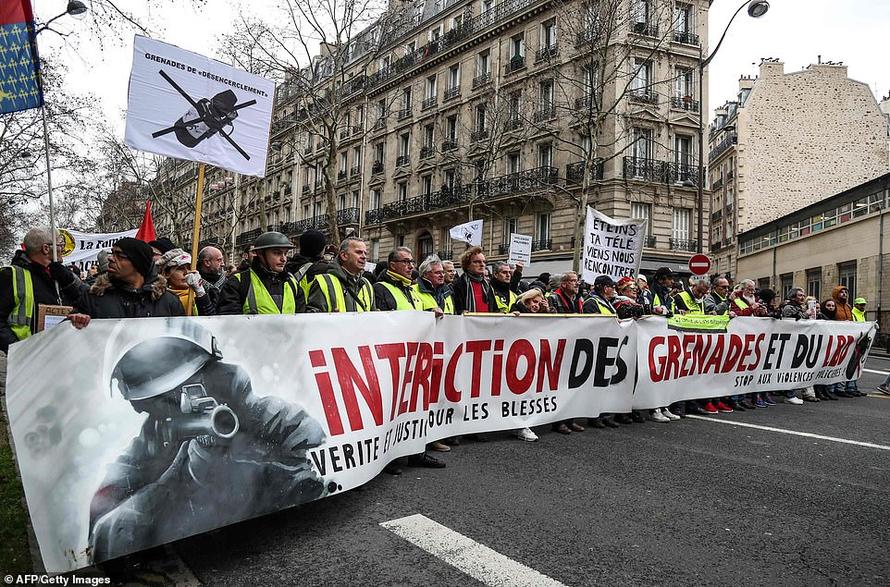