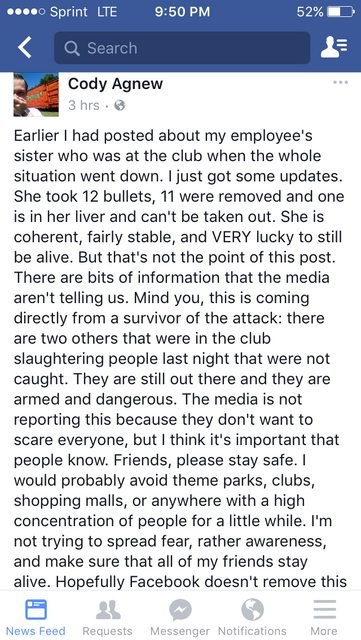 In the wake of the Orlando massacre, social media has been alight with people airing their thoughts on the incident, but a post claiming shooter Omar Mateen wasn’t the only gunman in Pulse has sparked particularly vociferous debate and outrage online.

The post in question was written by a man calling himself Cody Agnew, who posted it on Facebook on Sunday. It stated that he knew a woman who had survived the killing spree despite being shot 12 times and having 11 bullets removed since.

Agnew claimed that the woman, who he described as “coherent” and “fairly stable,” said there had been three gunmen in the gay nightclub on the night of the attack, and not just one.

The controversial post, which has since been deleted, claimed there were “bits of information that the media aren’t telling us.”

“There are two others that were in the club slaughtering people last night that were not caught,”

the post read. “They are still out there and they are armed and dangerous. The media is not reporting this because they don’t want to scare everyone, but I think it’s important that people know.”

@seanhannity I just saw a post from a Cody Agnew that there were 2 other shooters in the club. Can anyone verify this?

As the story continued to gain traction, arguments arose over whether Omar Mateen was a lone wolf or part of a group of shooters in the club, with even the Orlando Police Department tweeting to say that “rumors of multiple shooters are unfounded.”

Alert: Rumors of multiple shooters are unfounded. The one shooter, Omar Mateen, is dead #OrlandoUnited

It was also picked up by Snopes, the self-described “definitive Internet reference source for urban legends, folklore, myths, rumors, and misinformation,” which also said Agnew’s claims were false.

The mass shooting in Orlando was carried out by a lone gunman, not multiple shooters. https://t.co/NwJBlBMO40 pic.twitter.com/b0DsQGn54m

“It is incredibly unlikely that someone could have been shot twelve times at close range by such a powerful rifle and not only survive, but be coherent enough later the same day to be able to recount exactly how many people were shooting at victims during a chaotic situation in a dark and crowded nightclub,” Snopes wrote.

The website also sourced a Scientific American article from 2010 that detailed how eyewitness accounts coming out of highly stressful situations are not always reliable.

Other social media users, however, aired doubts about the true nature of the tragic incident, claiming it was a “false flag”event and an “inside job.”

The FBI knew the #Orlando gunman

He worked for #G4S

There were no ambulances

@FreeRadioRevolu From what ive seen on video footage so far- Pulse Nightclub shooting appears to be false-flag event-https://t.co/j8yGWxzQqV