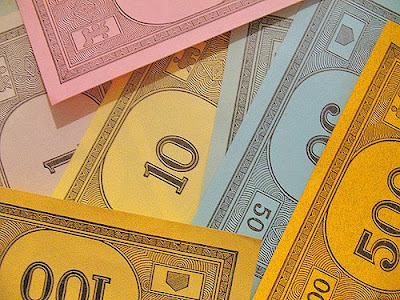 Organizers of the “Occupy Wall Street” protests have now urged the people gathered there to dress up as “corporate zombies” and pretend to eat monopoly money.  Indeed, if the protests were aimed at the real source of the problem– the Federal Reserve– the use of monopoly money in the demonstration might be the most striking symbol, however since many of the protestors  have aimed their anger at the free market, demanding we give the government that’s robbed us even more power to feed its cronies, the more fitting symbol of the protests in this particular demonstration are the zombies.

For a short period as the protests began many complained that the media wasn’t paying attention to them.   Suddenly women protesters were sprayed in the face with mace by a rogue cop and all eyes were on New York.  People who couldn’t occupy Wall Street started occupying places in other cities, and the corporate media began covering every aspect of it.

Now the protests are picking up momentum.  The media is grabbing control of it.  Something big indeed is happening, but it’s not good.

From Boston.com, writing about the protests in Boston:

“Accompanied by Boston Police officers who stopped traffic at key intersections, the protesters first gathered in the city’s Financial District this morning and then marched to the State House where they stood on the steps, chanting slogans and holding signs.

Some of the signs included “capitalism is organized crime” and “where’s my golden parachute?”

The media has the power to pick and choose what it wants to give attention to.  Though past protest marches involving thousands of people as well as a nationwide series of demonstrations at every Federal Reserve bank in the country years ago were flagrantly ignored by the cackling skulls on TV and newspaper hacks being told what to write, those which reinforce the positions coming out of the foolish left/right distraction and which ultimately benefit those who have created our current situation get full coverage.

While every faction of modern activism has made an appearance at the protests, the loudest and most featured voices now are the ones who claim that the free market drove us off this cliff, when in reality the free market hasn’t existed for years and that it’s too much government power that has led us to this point.  It is not a free market when government has the power to pick winners and losers and thus control the cogs of the economy for the benefit of its buddies.  It’s not a free market when a banking cartel has the ability to artificially lower interest rates and print money, devaluing the savings and purchasing power of people who actually work for a living to give to the firms that should have been allowed to crumble as a result of their own bad business practices.  Yes, big government advocates will complain that the free market leads to winners and losers too, but let’s look at who the losers would be if we had real capitalism and the government kept its hands off– AIG, JP Morgan, Citigroup, Wells Fargo, Bank of America, Merrill Lynch, Goldman Sachs, Morgan Stanley, ect…all the accounting firms who got bailouts with our money and who are being protested now.     Anyone who believes that human nature will suddenly change and that government officials will suddenly become more benevolent if they just get more of the power they’re grabbing for is either being deceptive or foolish.  “Too big to fail” will not go away simply because we turned the poor masses against the middle class and allowed the super rich stealing trillions in bailouts to eliminate their weaker competition by having the government tax the few remaining small business job creators into oblivion.

Common Sense was the title of a pamphlet that once helped inspire a revolution in a America, and it’s now it’s a concept that needs to be reawakened in America today.

The “Occupy Wall Street” protests have turned into a vanity bazar for hypocritical, leftist opportunists like millionaire Michael Moore who has done well for himself through capitalism and by marketing his movies through corporate companies that promote them within the corporate media.  When recently questioned about the Federal Reserve– which has enabled the corporate socialism that created our problems–he nervously dismissed the idea of any protest against it and tried to reinforce the simplistic and misguided message that the corporate media hopes useful idiots will latch onto– capitalism has to go!

Sometimes reality is more ironic than fiction.  While Michael Moore rails against capitalism, you have to pay to watch his movie on YouTube, while other well-known voices defending the free market allow their entire, expensively produced movies to be put on YouTube for free and encourage people to copy and distribute them.