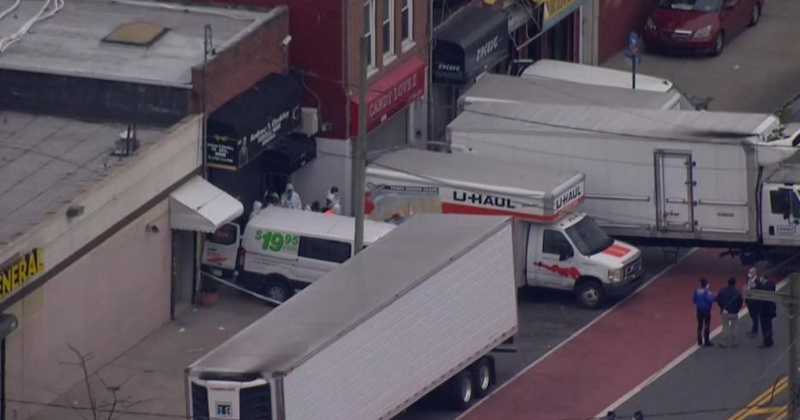 Dozens of dead bodies were found inside moving trucks near a funeral home in New York City, discovered after neighbors complained of a sickening odor emanating from the vehicles, which may have stored the corpses for weeks.

Residents of Brooklyn’s Flatlands neighborhood had tried to ignore the stench, but on Wednesday police were finally called to investigate its source, stumbling upon 50 rotting corpses stacked inside four non-refrigerated trucks at the Andrew T. Cleckley Funeral Home.

Police were called to a #Brooklyn neighborhood Wednesday after a #NewYork funeral home overwhelmed by the #coronavirus resorted to storing dozens of bodies in rented trucks, and a passerby complained about the smell. #theafricanpress #covid19 pic.twitter.com/eve7Wfaoai

“They were unloading bodies. They had bodies all over the floor inside the funeral home. They came out one by one, blood dripping,” one local man told a New York CBS affiliate, adding that he saw funeral home workers moving the corpses without masks or gloves.

“The smell, forget it. It was overwhelming.”

President of the Brooklyn borough, Eric Adams, said he arrived at the Cleckley facility on Wednesday evening to see what looked like a crime scene, with streets sealed off as officers inspected the trucks.

It was the smell that caused someone to dial 911. Cops discovering dozens of bodies on ice in rented trucks outside a Brooklyn funeral home. #SiriusXM115 pic.twitter.com/cKlgCAJzQm

“It appears the truck was full. They were trying to use U-Haul as a backup” Adams said, adding: “This is traumatizing to family members.”

New York City has been the country’s worst-hit hotspot for Covid-19 for some time, seeing over 164,000 infections and some 18,000 deaths, according to data gathered by Johns Hopkins University.

The health crisis has put abnormal strain on the city’s morgues and funeral homes, many of which are quickly running out of storage space for bodies.

Though the Federal Emergency Management Agency (FEMA) has provided refrigerated morgue trucks to deal with the excess deaths, some facilities are still struggling to cope with the influx of corpses.

The owner of the facility told authorities he had done his best to deal with the overwhelming flow of bodies, attempting to load the trucks with ice, but to little effect. Though he was slapped with two citations for the improper storage, the owner faces no criminal charges, according to NBC News.

Police say the bodies were transferred to a refrigerated vehicle later on Wednesday, but added it was not clear how many of the deceased had succumbed to the coronavirus, as opposed to other causes.

The coronavirus pandemic has claimed over 60,000 lives in the US, crossing the grim milestone of one million infections nationwide earlier this week. Though federal health officials have pointed to falling numbers in some of the country’s worst hotspots, the outbreak continues to inflict thousands of daily fatalities, with tens of thousands still contracting the virus each day.